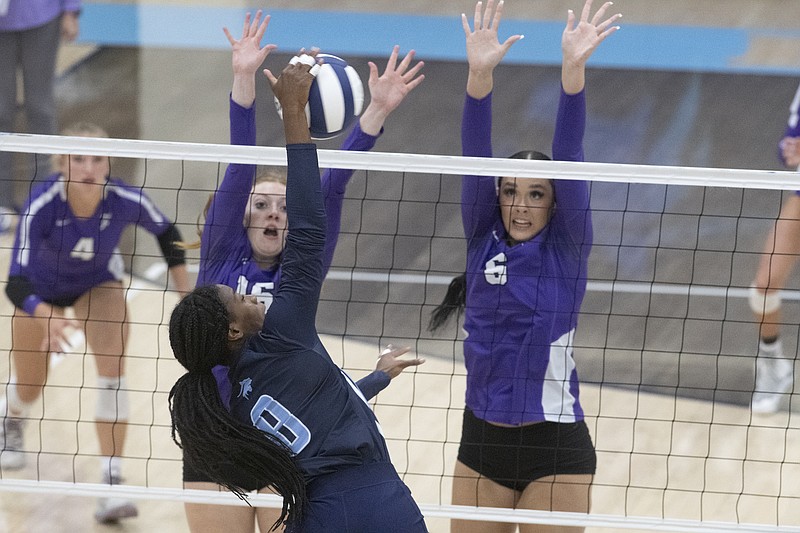 SPRINGDALE -- Fayetteville was coming off a long weekend of tough volleyball, but it took care of business Tuesday night to the tune of a 25-15, 25-21, 25-17 win over Springdale Har-Ber at Wildcat Arena.

Brooke Rockwell hammered 21 kills and surpassed 1,000 kills for her career in the win.

The Lady Purple Bulldogs improved to 20-1 overall and 7-0 in the 6A-West Conference.

"We played a lotta volleyball the last two weeks for sure," Phelan said. "So I think going on the road, you. knew that was gonna be a tough task. And then any time we come to play Har-Ber adds to that, so we were able to score the points when we needed to and on the whole kinda withstand any runs they made.

'I think coming back from a long road trip, a little weary for sure. It's one of those nights as a coach we just looked for ways to keep momentum and keep plugging away and get the win on the road."

Fayetteville bumped up a spot to third in the Max Preps national high school poll that was released earlier in the day. That comes on the heels of the Lady Purple Bulldogs' third-place finish in the prestigious 64-team Durango Fall Classic in Las Vegas over the weekend.

Fayetteville lost a tough three-set match to Marymount (Calif.) in the semifinals. But the Lady Purple'Dogs bounced back to defeat Iolani, a private school from Hawaii 21-25, 25-23, 25-18.

The Lady Purple'Dogs had control most of the night. Kennedy Phelan dished out 29 assists and chipped in nine kills, while Regan Harp added eight kills. Maddie Lafata hit double digits with 10 kills and Ashley Ruff anchored the defense with 12 digs.

Praveen had 35 assists and 17 digs, while Ana Bastos added 14 digs and 10 kills. Riley Richardson led the attack with 11 kills.

Laila Creighton, Brooklynn Bonanno and Jones combined for 32 assists, while Bonanno finished with a match-high 18 digs for Shiloh Christian (11-3, 6-0).

Makenzie Freeman registered a double-double with 18 kills and 15 digs in Hackett's tough 30-28 25-22, 25-21 win Monday at Van Buren as the Lady Hornets remained undefeated.