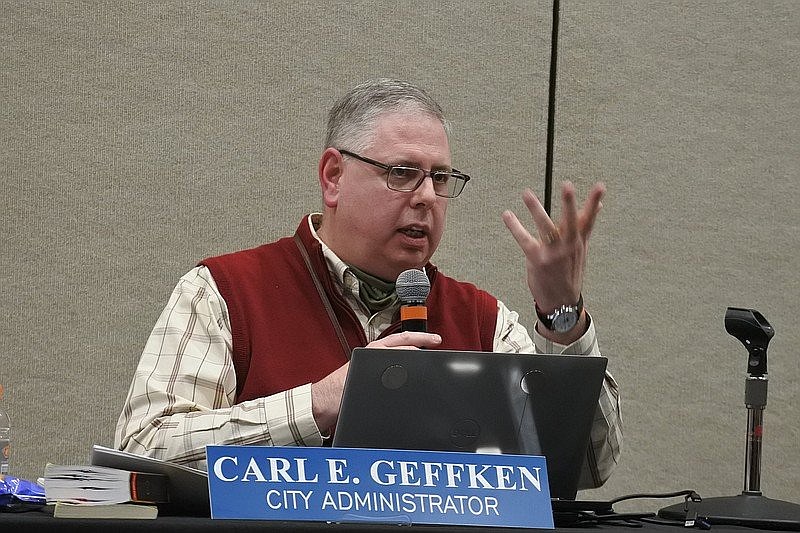 Attorney Joey McCutchen requested Friday that Geffken be charged with a misdemeanor, saying the city administrator repeatedly violated the Arkansas State Capitol and Historical Monument Protection Act by removing the display without public input or approval from city directors.

McCutchen's request came roughly one week after a state panel decided the city must keep the Confederate flag as part of its display if the city wants to restore the monument at Riverfront Park.

The display featured flags flown over Fort Smith since 1699 and included the Confederate flag.

The monument act became law in April 2021. It states except as permitted by law or authorized under the Arkansas History Commission, a historical monument cannot be moved, vandalized, damaged, destroyed, removed, altered, renamed or otherwise disturbed. However, the act doesn't prohibit a governmental entity having responsibility for maintaining a historical monument from taking proper measures for the protection, preservation, care, repair or restoration of a monument.

A Class A misdemeanor is punishable by up to one year in jail and a fine of up to $2,500.

Colby Roe, one of the city's attorneys, wrote a letter on Geffken's behalf to Shue, which said the city didn't permanently remove the display but was waiting for further guidance from the commission. Roe said there has been no violation by Geffken or anyone else.

Shue said Tuesday the city was ordered to comply with the Arkansas History Commission's ruling no later than 10 days after it was issued, and the decision was received Sept. 14.

"In the decision, the Arkansas History Commission denied the city's request for a waiver," Shue said. "However, the city was not specifically ordered to replace the flag display in its prior location. Correspondence between the attorneys involved in this matter and the court over the last 10 days seems to indicate that the city of Fort Smith is preserving the flags, but that the city does not intend at this time to put the flag display back up."

Shue noted 12th Judicial Circuit Judge Gunner DeLay hasn't issued an order requiring the flags to be replaced, but a hearing has been scheduled for Sept. 27.

The waiver request determining the disposition of the Riverfront Park flag display was the first to go before the Arkansas History Commission since the Arkansas State Capitol and Historical Monument Protection Act became law.

The city tried to get new flags for the display two years ago but learned the vendor no longer sold Confederate flags. The city decided the flags wouldn't be reinstalled and instead decided to replace them with flags that represent the six branches of the military.

Geffken acknowledged the decision to remove the flags was his.

"When the flags were tattered due to the weather, which does happen, a decision was made not to reinstall them in April of 2020," Geffken said. "We decided to move forward with flags of the military to coincide with F-35 project. The subsequent lawsuit was then filed, and we haven't done anything more at this time."

Shue said the only conduct that could potentially constitute a violation of the protection act is the city's failure to replace the flag display in its prior location between Sept. 14-20.

"I have complete confidence in the court's ability to determine the respective rights and responsibilities of both parties," Shue said. "Therefore, for all of the above-listed reasons, I cannot request law enforcement to investigate this matter at this time."