He indicates hard look due at issue of declassification by Compiled by Democrat-Gazette staff from wire reports | September 21, 2022 at 7:29 a.m. 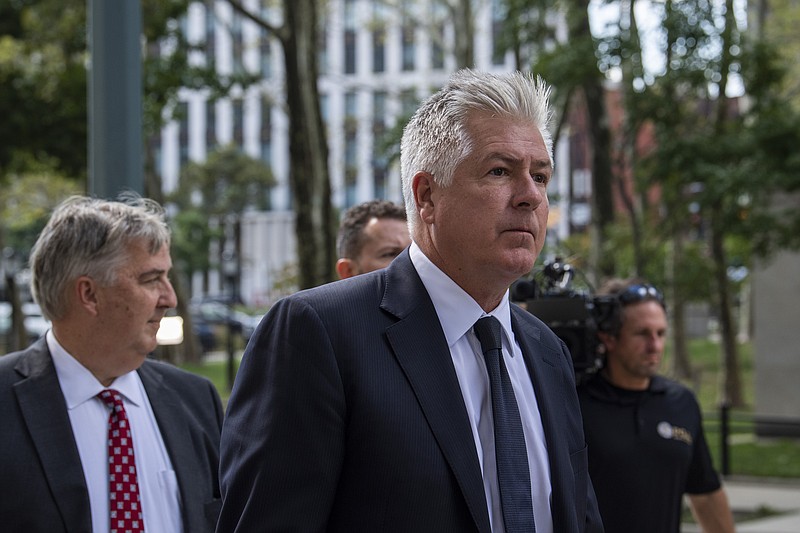 Donald Trump's attorneys Evan Corcoran and James Trusty walk past media at Brooklyn Federal Court on Tuesday, Sept. 20, 2022, in New York. Lawyers for Trump and for the Justice Department are to appear in federal court in Brooklyn on Tuesday before a veteran judge named last week as special master to review the roughly 11,000 documents — including about 100 marked as classified — taken during the FBI's Aug. 8 search of Mar-a-Lago. (AP Photo/Brittainy Newman)

WASHINGTON -- The independent arbiter tasked with inspecting documents seized in an FBI search of former President Donald Trump's Florida home said Tuesday that he intends to push briskly through the review process and appeared skeptical of the Trump team's reluctance to say whether it believed the records had been declassified.

"We're going to proceed with what I call responsible dispatch," Raymond Dearie, a veteran Brooklyn judge, told lawyers for Trump and the Justice Department in their first meeting since his appointment last week as a so-called special master.

The purpose of the meeting was to sort out next steps in a review process expected to slow by weeks, if not months, the criminal investigation into the retention of top-secret information at Mar-a-Lago after Trump left the White House. As special master, Dearie will be responsible for sifting through the thousands of documents recovered during the Aug. 8 FBI search and segregating those protected by claims of executive privilege or attorney-client privilege.

Though Trump's lawyers had requested the appointment of a special master to ensure an independent review of the documents, they have resisted Dearie's request for more information about whether the seized records had been previously declassified -- as Trump has maintained. His lawyers have consistently stopped short of that claim, even as they have asserted that a president has absolute authority to declassify information. They said in a separate filing Tuesday that the Justice Department had not proven that the records remained classified.

"In the case of someone who has been president of the United States, they have unfettered access along with unfettered declassification authority," one of Trump's lawyers, James Trusty, said in court Tuesday.

But Dearie said that if Trump's lawyers will not actually assert that the records have been declassified, and the Justice Department instead presents an acceptable case that they remain classified, then he would be inclined to regard them as classified.

In a letter to Dearie on Monday night, the lawyers said the declassification issue might be part of Trump's defense in the event of an indictment. Trusty said in court Tuesday that the Trump team should not be forced at this point to disclose a possible defense based on the idea that the records had been declassified.

He denied that the lawyers were trying to engage in "gamesman-like" behavior but instead said he believed it was a process that required "baby steps." Trusty said the right time for the discussion is whenever Trump presses forward with a claim to get any seized property back.

Dearie said he understood the position but observed: "I guess my view of it is, you can't have your cake and eat it, too."

The resistance to the judge's request was notable because it was Trump's lawyers, not the Justice Department, who had requested the appointment of a special master and because the recalcitrance included an acknowledgment that the investigation could be building toward an indictment.

Despite the focus on whether the seized documents are classified or not, the three statutes the Justice Department listed on a warrant as part of its investigation do not require that the mishandled information be classified to initiate a prosecution.

The Trump team has also questioned the feasibility of some of the deadlines for the special master's review. That work includes inspecting the roughly 11,000 documents, including about 100 marked as classified, that were taken during the FBI's search.

Almost everything about Dearie's appointment is unusual -- including the fact that he held the hearing Tuesday in his own courtroom in U.S. District Court in Brooklyn even though the lawyers arguing before him were based in Washington and Florida, where Trump initially requested a special master.

"I realize that I've dragged you all to Brooklyn, New York," the judge said as the hearing began, adding that he hoped to keep such inconveniences at a minimum.

It was also somewhat unusual that Dearie's work was moving forward even as the Justice Department waited to get a ruling from an appeals court that could directly affect the case. On Friday, prosecutors asked the 11th U.S. Circuit Court of Appeals in Atlanta to allow them to resume using the 100 classified documents in their investigation of whether Trump had illegally kept national defense information at Mar-a-Lago or obstructed repeated efforts by the government to retrieve the records.

On Tuesday, Trump's lawyers filed their own papers to the same appeals court, making some of the same arguments they had made before Dearie. They claimed, for example, that the Justice Department had not proved that the documents it had deemed as classified continued to be classified and hinted that Trump might in fact have declassified them.

"The government again presupposes that the documents it claims are classified are, in fact, classified and their segregation is inviolable," the lawyers wrote. "However, the government has not yet proven this critical fact. The president has broad authority governing classification of, and access to, classified documents."

But apparently undercutting that argument, Trusty told Dearie at the hearing that he wanted some of his legal partners to get expedited top-secret security clearances so that they, too, could view the documents. Trusty said he already had top-secret clearance from another case.

Complicating the matter even further, Julie Edelstein, a lawyer for the Justice Department, told Dearie that a handful of the documents at issue were so secret that even Trusty's clearance might not be enough.

Trusty responded that "it was kind of astounding" that the government would seek to keep Trump's legal team from seeing some of the classified material in the case. They needed to see it all, he said, to determine whether the government had acted properly by removing it during the search of Mar-a-Lago.

U.S. District Judge Aileen Cannon, a Trump appointee who granted the Trump team's request for a special master, had set a Nov. 30 deadline for Dearie's review and instructed him to prioritize his inspection of classified records. The Justice Department has asked a federal appeals court to halt Cannon's order requiring it to provide him with classified documents for his review. That appeal is pending.

Dearie, a Ronald Reagan appointee whose name is on the atrium of his Brooklyn courthouse, made clear during Tuesday's meeting that he intended to meet the deadlines, saying there was "little time" to complete the assigned tasks.

Edelstein said she was hopeful that the department could get the documents digitized and provided to Trump's lawyers by early next week. She noted that the department had given the legal team a list of five vendors approved by the government for the purposes of scanning, hosting and otherwise processing the seized records.

After some haggling, Dearie instructed Trusty's lawyers to choose a vendor by Friday.

Earlier Tuesday, the Trump legal team urged the U.S. Court of Appeals for the 11th Circuit to leave in place Cannon's order temporarily barring the Justice Department's use of the classified records for its criminal investigation while Dearie completes his review. The department has said that order has impeded its investigation into the presence of top-secret information at Mar-a-Lago.

Trump's lawyers called those concerns overblown, saying investigators could still do other work on the investigation even without scrutinizing the seized records.

Information for this article was contributed by Eric Tucker and Michael R. Sisak of The Associated Press and by Alan Feuer and Charlie Savage of The New York Times. 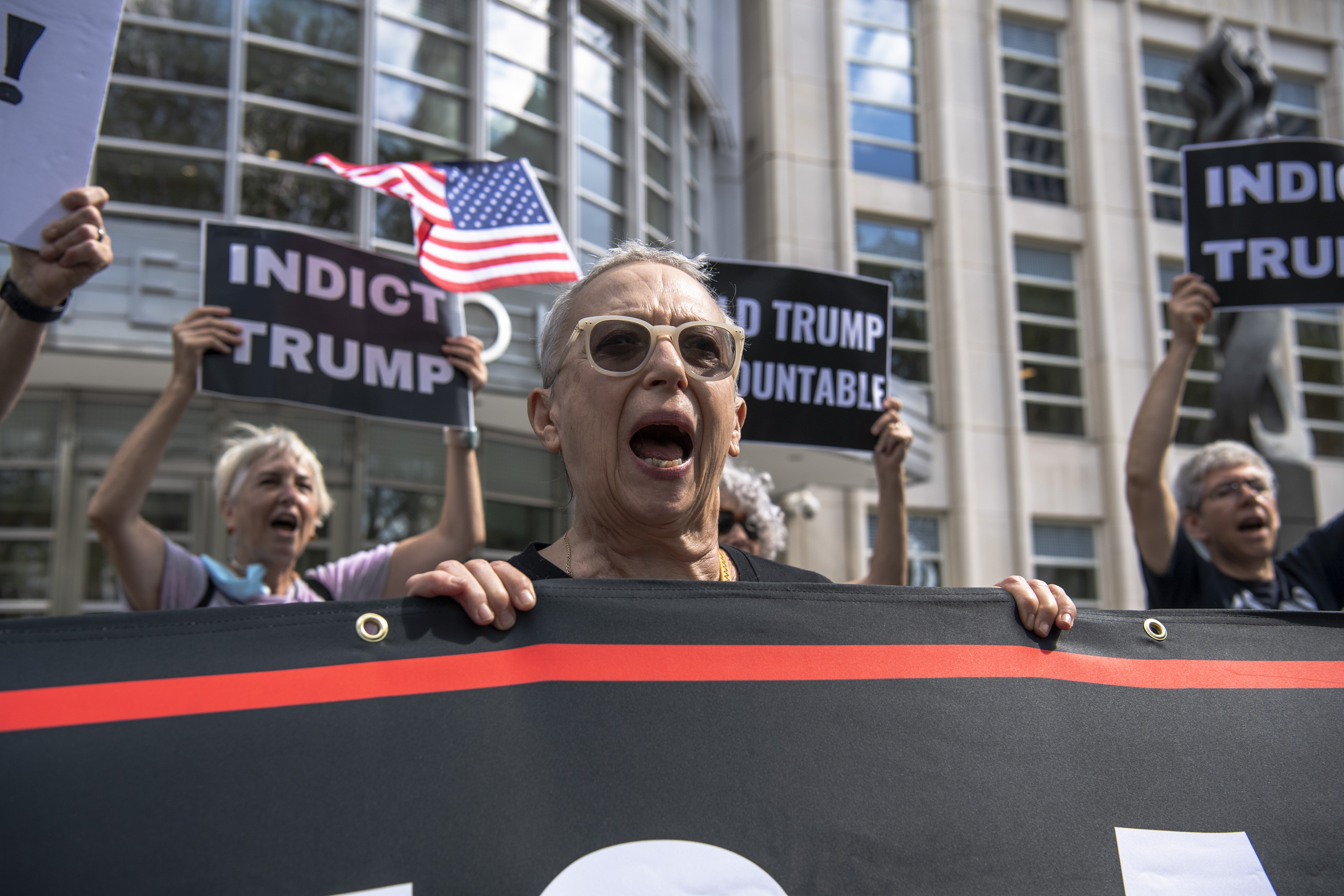 Protesters stand outside as Former President Donald Trump's lawyers enter Brooklyn Federal Court on Tuesday, Sept. 20, 2022, in New York. Lawyers for Trump and for the Justice Department are to appear in federal court in Brooklyn on Tuesday before a veteran judge named last week as special master to review the roughly 11,000 documents — including about 100 marked as classified — taken during the FBI's Aug. 8 search of Mar-a-Lago. (AP Photo/Brittainy Newman) 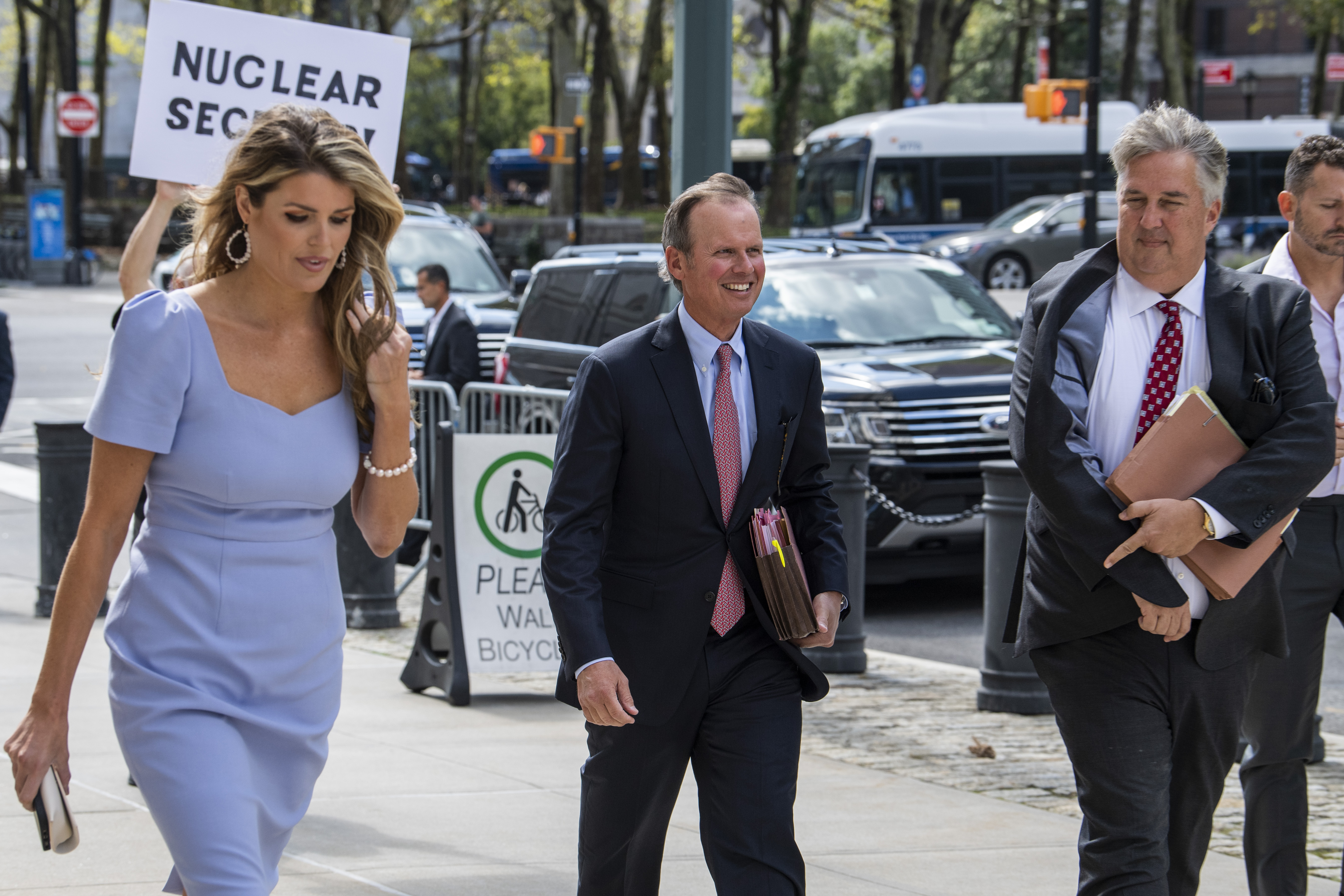 Former President Donald Trump's attorneys Linsey Halligan, James Trusty, and Chris Kise arrive at Brooklyn Federal Court on Tuesday, Sept. 20, 2022, in New York. Lawyers for Trump and for the Justice Department are to appear in federal court in Brooklyn on Tuesday before a veteran judge named last week as special master to review the roughly 11,000 documents — including about 100 marked as classified — taken during the FBI's Aug. 8 search of Mar-a-Lago. (AP Photo/Brittainy Newman) 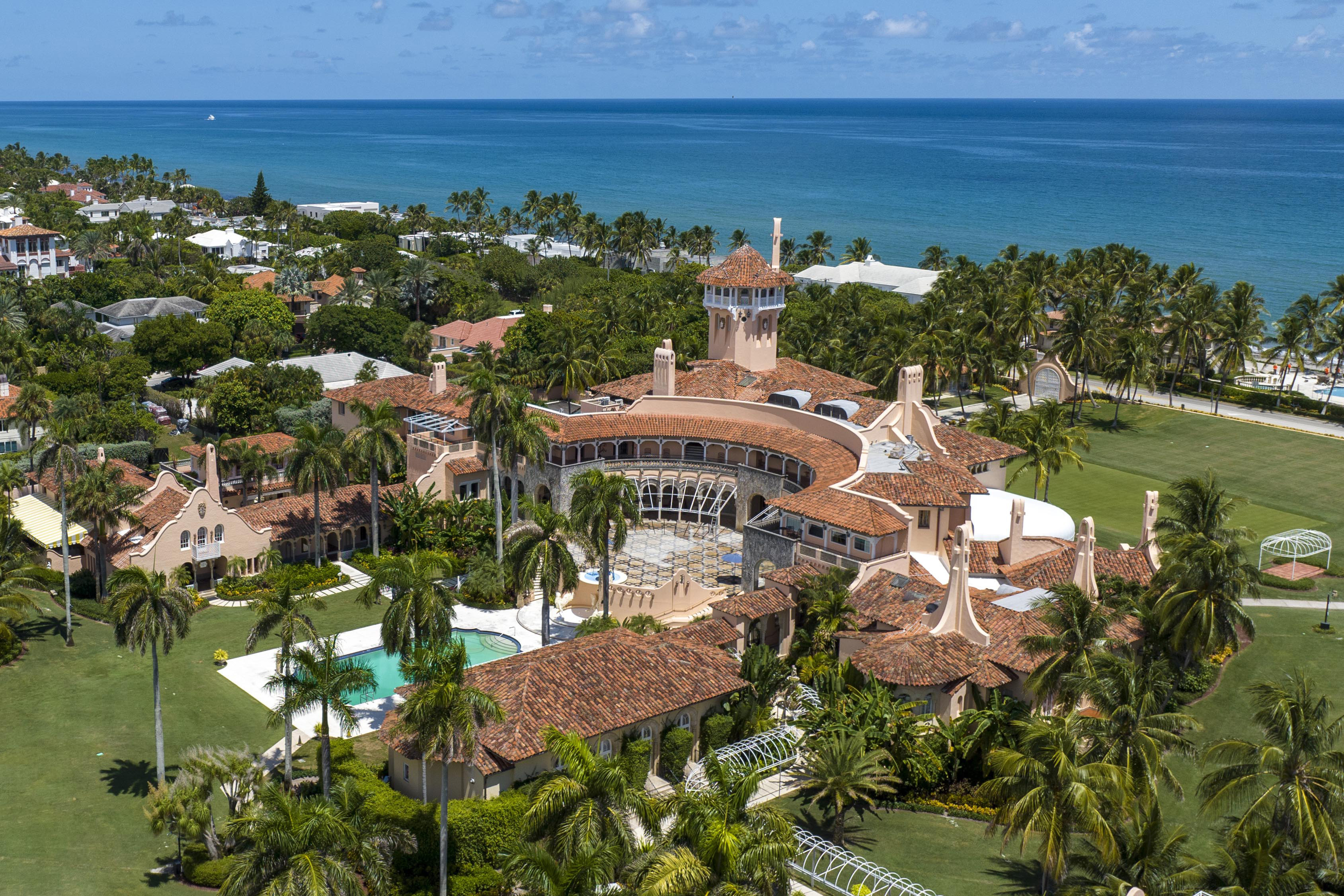 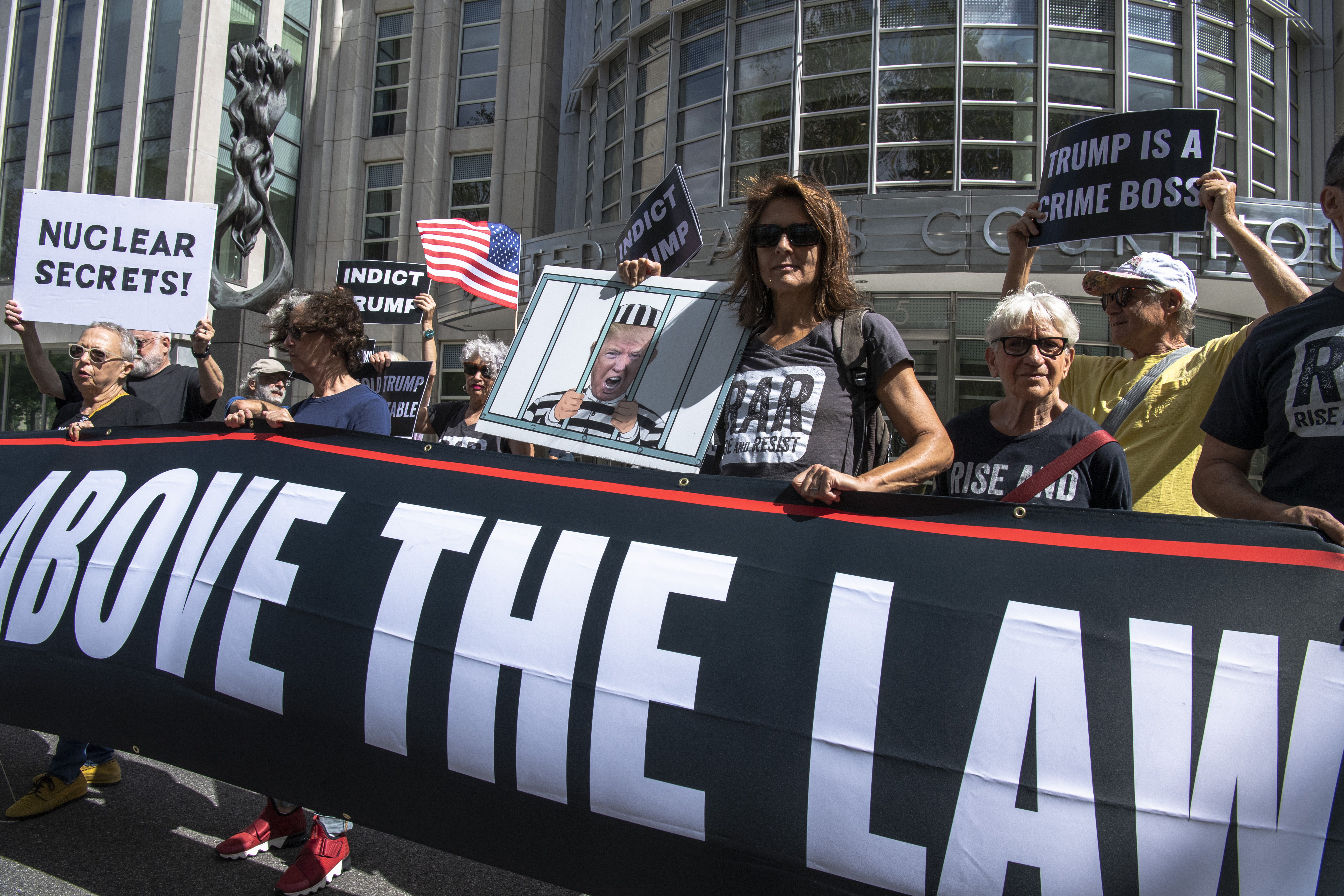 Protesters stand outside as Donald Trump's lawyers enter Brooklyn Federal Court on Tuesday, Sept. 20, 2022, in New York. Lawyers for Trump and for the Justice Department are to appear in federal court in Brooklyn on Tuesday before a veteran judge named last week as special master to review the roughly 11,000 documents — including about 100 marked as classified — taken during the FBI's Aug. 8 search of Mar-a-Lago. (AP Photo/Brittainy Newman)