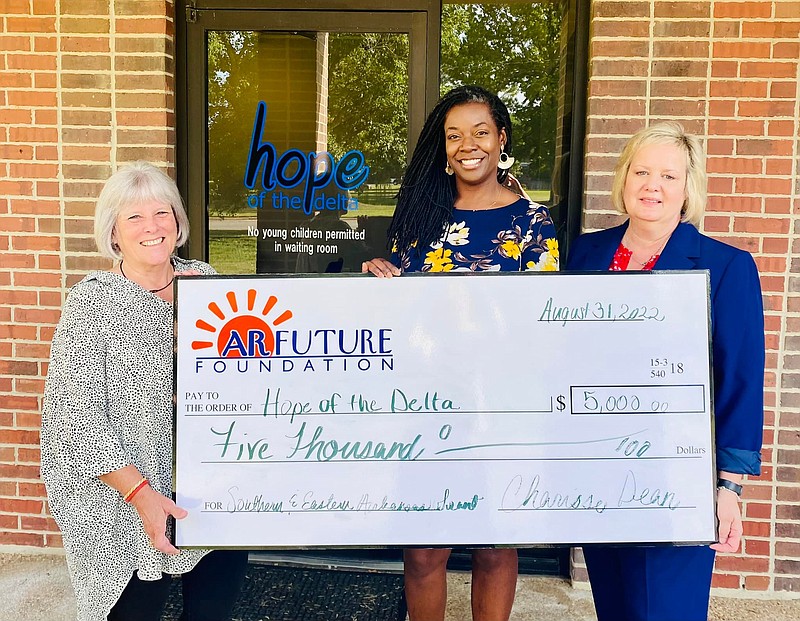 Participants at the presentation were Amanda Curry (left) chairman of board at Hope of the Delta; Charisse Dean, director of ARFuture Foundation; and Tamela Turbeville, chief executive officer of Hope of the Delta. (Special to The Commercial)

Hope of the Delta, 3905 S. Hazel St., received a $5,000 grant from the ARFuture Foundation Eastern and Southern Arkansas pregnancy help organization. The funds are for the Arkansas County facility at Stuttgart which is under construction. An opening is planned for early 2023.

This is the inaugural year for the foundation to award 10 grants of $5,000 to pregnancy centers across the Delta, according to a news release.

All Hope of the Delta services are free and include pregnancy tests, limited obstetrical ultrasounds, prenatal and parenting classes for mothers and fathers, and sexually transmitted infections (STI) screening and treatment, according to the release.

"ARFuture Foundation supports a network of over 30 pregnancy centers across Arkansas through grants that are a means to perpetuate a culture of life," according to the release.

The women's resource center received the local grant this month.

"We appreciate everything centers like Hope do and we endeavor to assist in their work," said Charisse Dean, director of the foundation.

Hope of the Delta also has a facility at West Memphis and its mobile unit serves cities across the Delta, according to the release.

"We are so pleased to have received the grant and look forward to using the funds to address the needs of the Stuttgart facility," said Tamela Turbeville, chief executive officer of Hope of the Delta.