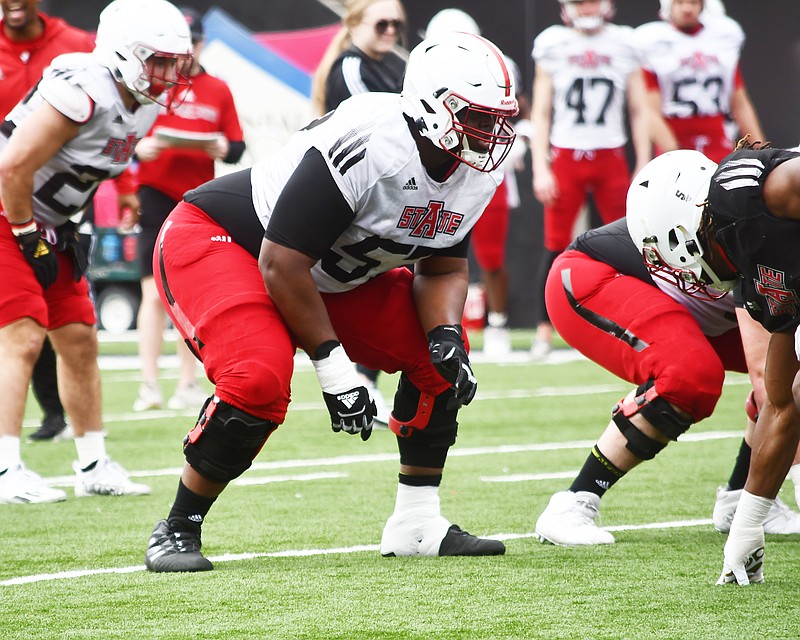 JONESBORO -- Not that the nicks and bruises of a typical football season aren't there, but Arkansas State has been relatively fortunate when it's come to health in 2022.

Top wide receiver Te'Vailance Hunt missed the Red Wolves' first two games with a nagging leg injury but returned against Memphis last weekend. Fellow wideout Champ Flemings was limited by an injury against the Tigers yet still was on the field Saturday night.

Two players who have yet to appear this season are getting closer. Quarterback-turned-wideout Wyatt Begeal is no longer in a knee brace and freshman Javante Mackey escaped a potentially season-ending meniscus tear during the preseason. He could be contributing on special teams within the next couple of weeks.

But the first major injury blow came in the final minutes at Memphis when Robert Holmes suffered an injury that will end his season. The right tackle started three games last season before a season-ending knee injury cut short his first year with the Red Wolves.

"It's very, very tough when an individual like [Holmes] has sacrificed and put so much work into it," Coach Butch Jones said in his new conference Tuesday. "He was having probably the best game he's had since he's been here, and it's very, very unfortunate."

ASU did not disclose Holmes' injury, but on a Brian Snead run with 5:18 remaining, a mass of linemen collapsed on Holmes. Hunt immediately signaled for trainers with Holmes grabbing at his left knee.

The 6-4, 339-pounder needed the help of two ASU staffers to get off the field, barely putting any weight on his left side before going into the medical tent.

Holmes, who spent 2017-19 at Connecticut, came to ASU after playing at FCS Austin Peay in the fall of 2020 and the spring of 2021. The Jupiter, Fla., native had two years of eligibility remaining entering this season (redshirt in 2017, extra covid year in 2020 and a medical redshirt last season), so Holmes could return in 2023.

Until then, the Red Wolves will turn to Noah Smith to fill Holmes' spot. The redshirt freshman from Locust Fork, Ala., did not appear in a game in 2021 but was graded as a 3-star prospect by 247Sports and ESPN.

"It's a great illustration to a lot of our younger players," Jones said. "You can get caught up in the midst of not playing, but you're always one or two snaps away from playing."

Lost amid a points-filled fourth quarter against Memphis was an end to the first half that was almost as egregious as the Arkansas State's second-half finish.

After Memphis took a 21-17 lead with 1:30 to play, the Red Wolves got the ball at their 35-yard line following a kickoff out of bounds. Quarterback James Blackman gained 1 yard on an option run, yet Coach Butch Jones opted to not call either of his two remaining timeouts.

The clock ticked all the way down to 53 seconds before ASU's next play -- a 10-yard dump-off to running back Johnnie Lang to pick up a first down at the Red Wolves' 46.

Again, Jones let the clock run, seconds disappearing until Lang caught another pass from Blackman and stepped out of bounds at the Memphis 44 with 15 second until halftime.

"The thing you can't do is have a catastrophic [play] to go in at halftime," Jones said after the game. "That's my decision and that's what we decided to do."

Yet ASU was basically in kicker Dominic Zvada's range at that point. The freshman is 5 of 5 on field-goal attempts and has made kicks of 60-plus yards in practice.

Had the Red Wolves not gained another yard from the Tigers' 44, it would've been a 61-yard attempt for Zvada.

Instead, ASU ran two more plays. The first was a throw-away that took the clock down to eight seconds. The second was a screen pass to Lang, who got to the Memphis 36 but was unable to go down before time expired.

Had the Red Wolves been trailing 37-35 instead of 37-32 on their final drive, it would have required just a field goal to retake the lead.

That's worth noting when ASU's special teams have been the best in the Sun Belt Conference through three weeks, per Football Outsiders. The site's special teams Fremeau Efficiency Index rating -- which combines kickoffs, punts, and field goals into one statistic -- puts the Red Wolves 15th nationally.

Those tuning into ASU's game Saturday may catch a glimpse of Hudson, Old Dominion's puppy mascot, on the Monarchs' sideline.

As detailed by The Athletic's David Ubben, through a friend of his son, ODU Coach Ricky Rahne was connected to Mutts with a Mission, a program that trains service dogs to work with disabled veterans and first responders. Several puppies visited the Monarchs' weight room in July and one quickly connected with the players.

There was some controversy last week when the University of Virginia initially wasn't going to allow the yellow labrador puppy to be on the field for ODU's game at Virginia.

But things were eventually resolved to allow Hudson to be in Charlottesville with the Monarchs, donning his puppy Crocs and sunglasses.

"Obviously, [Virginia has] a horse running around on the field," Rahne quipped Monday during the Sun Belt's weekly teleconference. "So having a puppy who just lays there the whole game, I didn't think was going to be too much of a big deal."