Atrocities in Ukraine chill blood, he declares by Compiled by Democrat-Gazette staff from wire reports | September 22, 2022 at 7:19 a.m. 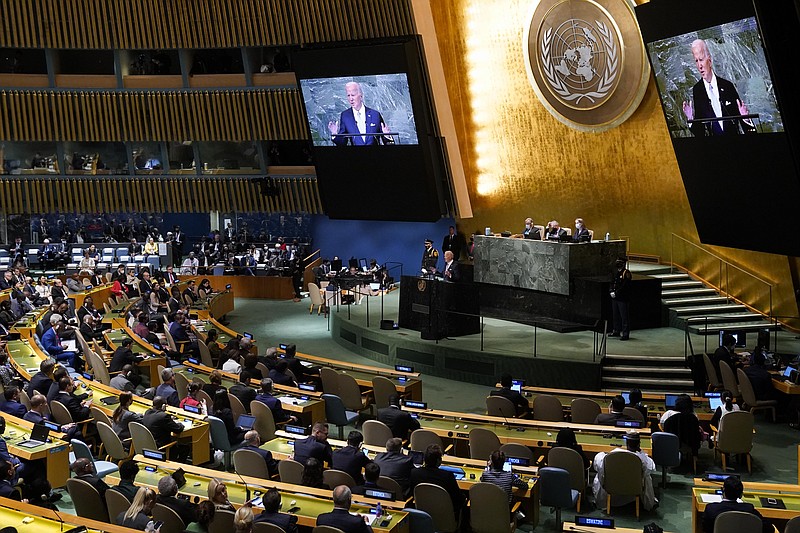 UNITED NATIONS -- President Joe Biden declared at the United Nations on Wednesday that Russia has "shamelessly violated the core tenets" of the international body with its war in Ukraine as he summoned nations around the globe to stand firm in backing the Ukrainian resistance.

Delivering a forceful condemnation of Russia's seven-month invasion, Biden said reports of Russian abuses against civilians and its efforts to erase Ukraine and its culture "should make your blood run cold." He referenced President Vladimir Putin's announcement Wednesday that he had ordered a partial mobilization of reservists, a deeply unpopular step that sparked protests in Russia.

And Putin's new nuclear threats against Europe showed "reckless disregard" for Russia's responsibilities as a signer of the Treaty on the Non-Proliferation of Nuclear Weapons, Biden said.

He also criticized Russia for scheduling "sham referenda" this week in territory it has forcibly seized in Ukraine.

"A permanent member of the U.N. Security Council invaded its neighbor, attempted to erase a sovereign state from the map. Russia has shamelessly violated the core tenets of the U.N. charter," he told his U.N. audience.

Biden's speech was part of an effort to maintain Russia's isolation on the global stage as the costs of war mount, worries about energy this winter loom and Congress is likely to look more skeptically on spending more on military defense. The president called on all nations, whether democracies or autocracies, to speak out against Russia's "brutal, needless war" and to bolster's Ukraine effort to defend itself.

"We will stand in solidarity against Russia's aggression, period," Biden said.

Biden also highlighted consequences of the invasion for the world's food supply, pledging $2.9 billion in global food security aid to address shortages caused by the war and the effects of climate change. He praised a U.N.-brokered effort to create a corridor for Ukrainian grain to be exported by sea, and called on the agreement to be continued despite the ongoing conflict.

Biden also pressed nations to meet an $18 billion target to replenish the Global Fund to Fight AIDS, tuberculosis and malaria, reiterating the U.S. commitment of $6 billion to that goal.

"Now is the moment to accelerate our efforts to reduce health inequities, and to address barriers to access including gender and human-rights barriers to build a more inclusive healthcare system, to leave no one behind, to end AIDS, tuberculosis and malaria for good," Biden said, as he was joined by leaders from Japan, Germany, France, Canada and the EU for the announcement.

But the heart of the president's visit to the U.N. this year was his full-throated censure of Russia as its war nears the seven-month mark. One of Russia's deputy U.N. ambassadors, Gennady Kuzmin, was sitting in Russia's seat during Biden's speech.

The address came as Russian-controlled regions of eastern and southern Ukraine have announced plans to hold Kremllin-backed referendums on becoming part of Russia and as Moscow was losing ground in the invasion.

Putin's decision to "wave around the nuclear card" in televised remarks falls in line with previous menacing rhetoric he's used during the war, according to a senior Biden administration official who was not authorized to comment publicly and spoke on the condition of anonymity. The official added that the administration has gleaned "no specific information, signals or moods" from Putin that suggest he's taking action to prepare for utilizing Russia's nuclear weaponry.

The White House said the global food security funding includes $2 billion in direct humanitarian assistance through the United States Agency for International Development. The balance of the money will go to global development projects meant to boost the efficiency and resilience of the global food supply.

"This new announcement of $2.9 billion will save lives through emergency interventions and invest in medium- to long-term food security assistance in order to protect the world's most vulnerable populations from the escalating global food security crisis," the White House said.

Biden was confronting no shortage of difficult issues as leaders gathered this year.

In addition to the Russian war in Ukraine, European fears that a recession could be just around the corner are heightened. Administration concerns grow by the day that time is running short to revive the Iran nuclear deal and over China's saber-rattling on Taiwan.

His Wednesday address comes on the heels of Ukrainian forces retaking control of large stretches of territory near Kharkiv. But even as Ukrainian forces have racked up battlefield wins, much of Europe is feeling painful blowback from economic sanctions levied against Russia. A vast reduction in Russian oil and gas has led to a sharp jump in energy prices, skyrocketing inflation and growing risk of Europe slipping into a recession.

Biden's visit to the U.N. also comes as his administration's efforts to revive the 2015 Iran nuclear deal appear stalled.

The deal brokered by the Obama administration -- and scrapped by President Donald Trump in 2018 -- provided billions of dollars in sanctions relief in exchange for Iran's agreement to dismantle much of its nuclear program and open its facilities to extensive international inspection.

U.S. National Security Adviser Jake Sullivan said administration officials would be consulting with fellow signers of the 2015 agreement on the sidelines of this week's meetings.

This year's U.N. gathering is back to being a full-scale, in-person event after two years of curtailed activity because of the pandemic.

Ukraine's president implored the world Wednesday to punish Russia for its invasion, even as the leader vowed his forces would win back every inch of territory despite Moscow's decision to redouble its war effort.

In a much-anticipated video address to the U.N. General Assembly hours after Russia announced it would mobilize some reservists, Volodymyr Zelenskyy portrayed the declaration as evidence the Kremlin wasn't ready to negotiate an end to the war -- but insisted his country would prevail anyway.

"We can return the Ukrainian flag to our entire territory. We can do it with the force of arms," the president said. "But we need time."

Putin's decree Wednesday about the mobilization was sparse on details. Officials said as many as 300,000 reservists could be tapped. It was apparently an effort to seize momentum after a Ukrainian counteroffensive this month retook swaths of territory that Russians had held.

But the first such call-up in Russia since World War II also brought the fighting home in a new way for Russians and risked fanning domestic anxiety and antipathy toward the war. Shortly after Putin's announcement, flights out of the country rapidly filled up, and more than 1,000 people were arrested at rare antiwar demonstrations across the country.

A day earlier, Russian-controlled parts of eastern and southern Ukraine announced plans for referendums on becoming parts of Russia. Ukrainian leaders and their Western allies consider the votes illegitimate.

Zelenskyy didn't discuss the developments in detail. But he suggested that any Russian talk of negotiations was only a delaying tactic, and that Moscow's actions speak louder than its words.

Ivorian President Alassane Ouattara says African countries must get top priority for the wheat being exported from Ukraine after officials said only 17% of it has been reserved for the continent over the past two months.

Of that, 10% went to Egypt alone, and smaller amounts have gone to Sudan, Kenya, Somalia and Djibouti, according to the Joint Coordination Center, run by the U.N., Turkey, Russia and Ukraine.

Ouattara told the U.N. General Assembly on Wednesday that his West African nation "once again requests that priority be given to Africa in the application of the Istanbul Agreement," which was signed in late July.

European Union foreign policy chief Josep Borrell says he is calling an emergency meeting of EU foreign ministers and will start proposing new sanctions to respond to Russia's latest "unacceptable" threat to use nuclear weapons in Ukraine and upcoming referendums for Russian-controlled areas of Ukraine to become part of Russia.

He told a news conference on the sidelines of the U.N. General Assembly that he expected the meeting Wednesday night to also discuss how to continue providing military support to Ukraine and putting pressure on Russia.

Borrell said Russian President Vladimir Putin's threat to use nuclear weapons in Ukraine is a danger to the world and an attempt to intimidate Ukraine and its supporters. But, he said, "he has failed, he will fail again."

He stressed that the EU is not going to engage directly in the seven-month-old war, which followed Russia's invasion of Ukraine on Feb. 24, and will continue "more of the same" -- military support and economic and individual sanctions.

France's Macron on Wednesday criticized Putin's decision to declare a partial military mobilization in the face of setbacks in its war in Ukraine, saying it will further isolate Moscow.

Speaking on the sidelines of the General Assembly, Macron expressed dismay at a decision that would "to drag [Putin's] country, and in particular his country's youth, into the war."

Macron added: "And so today, Russia is increasingly isolated."

Information for this article was contributed by Aamer Madhani, Zeke Miller, Jennifer Peltz, Andrew Katell and staff writers of The Associated Press. 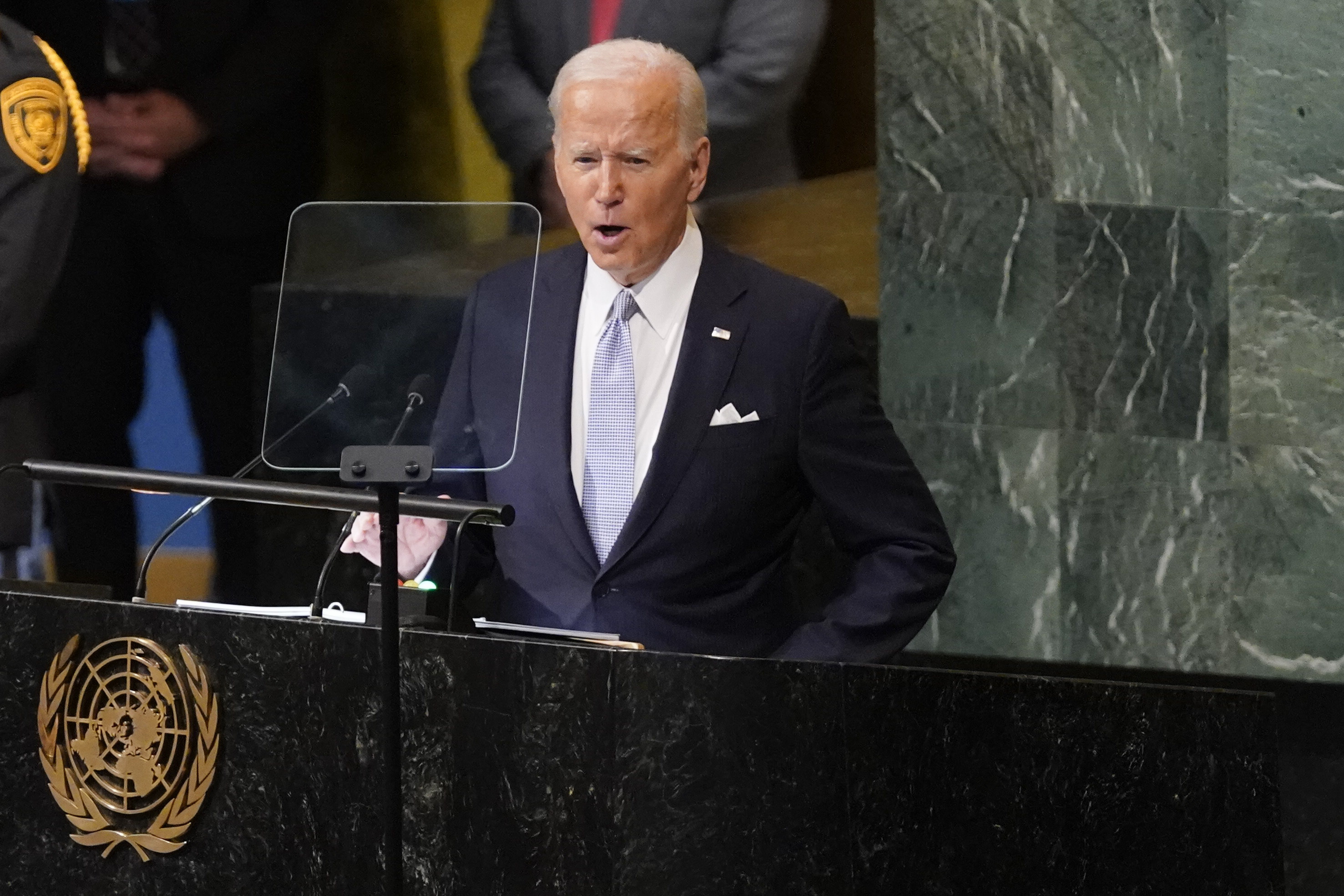 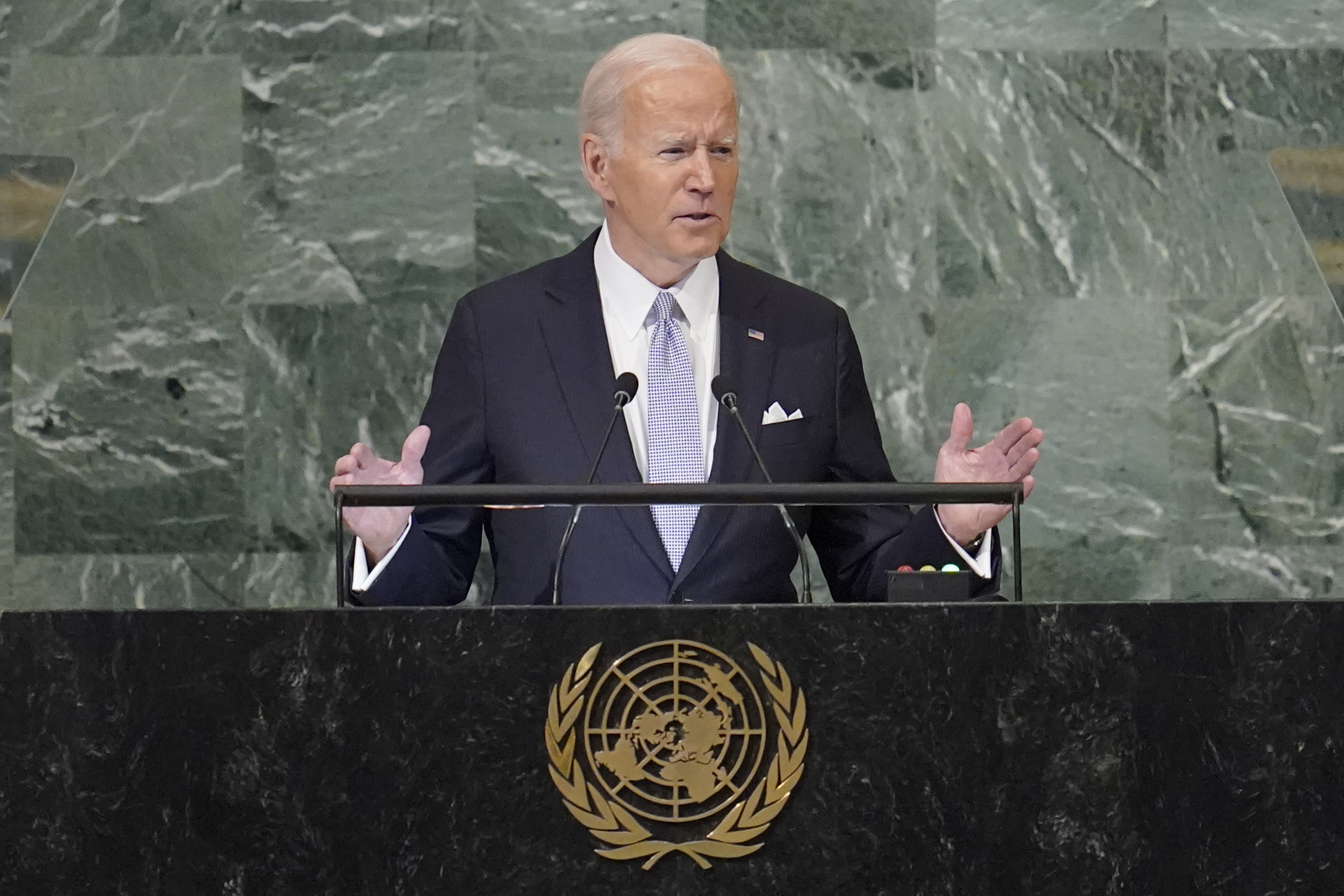 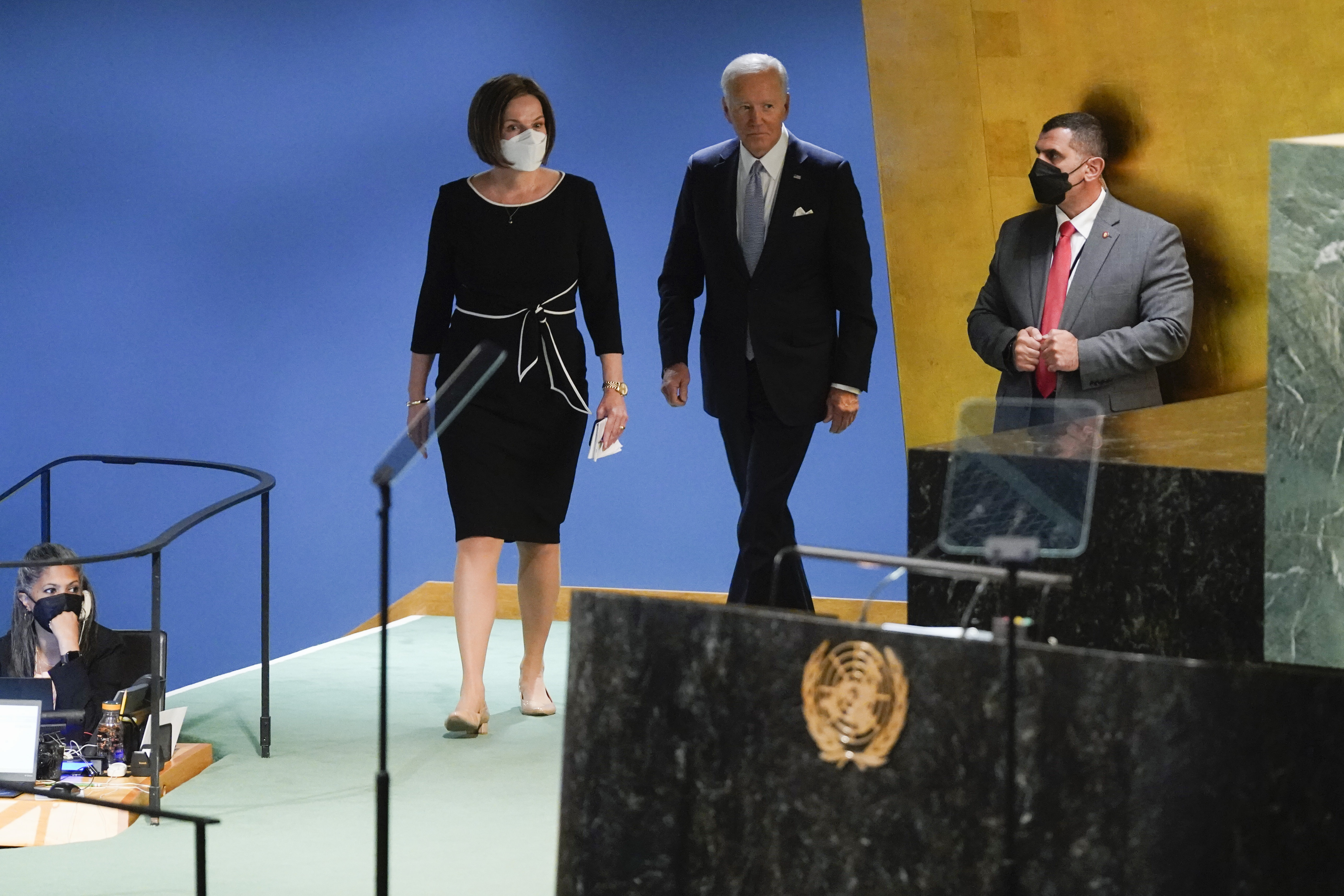 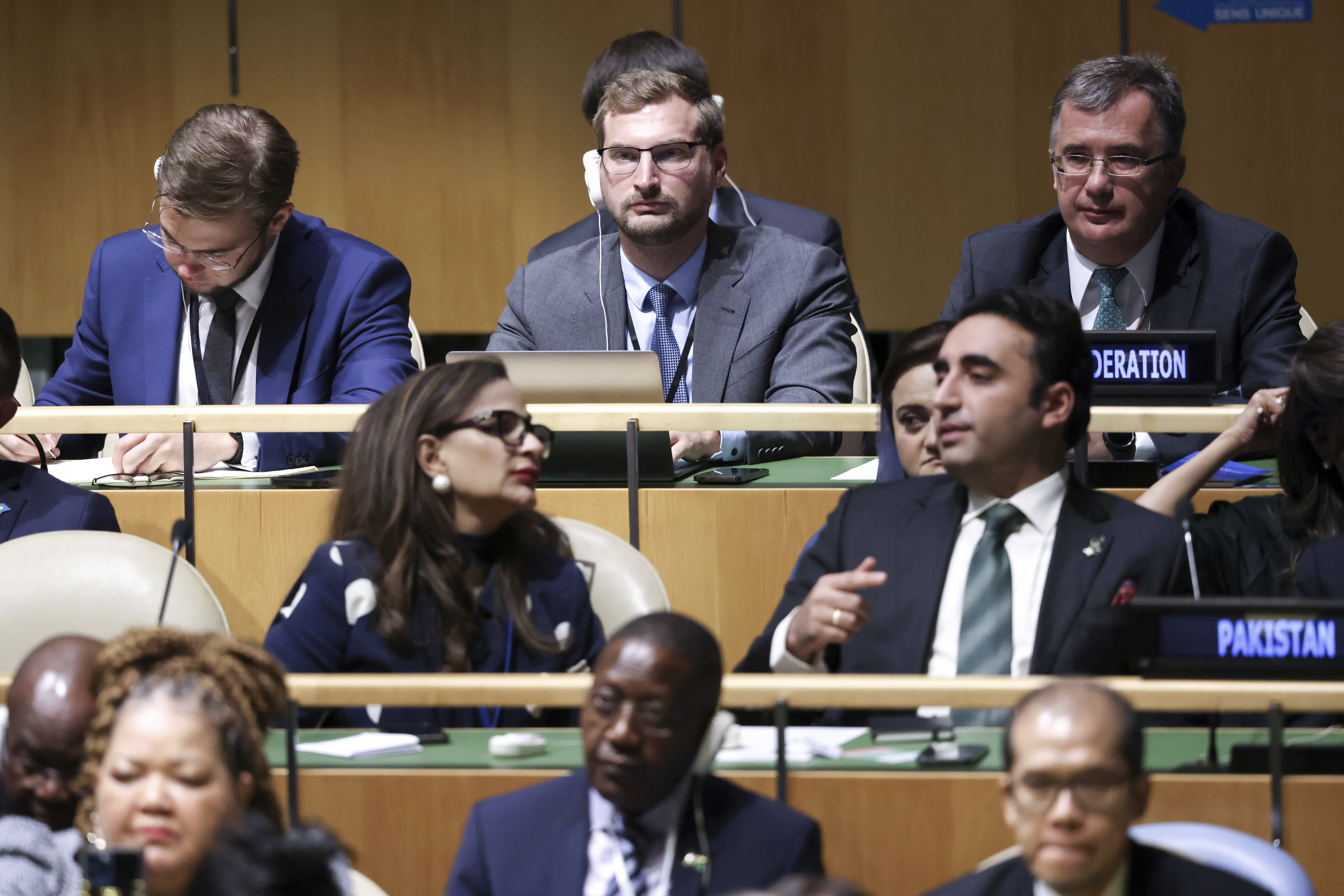 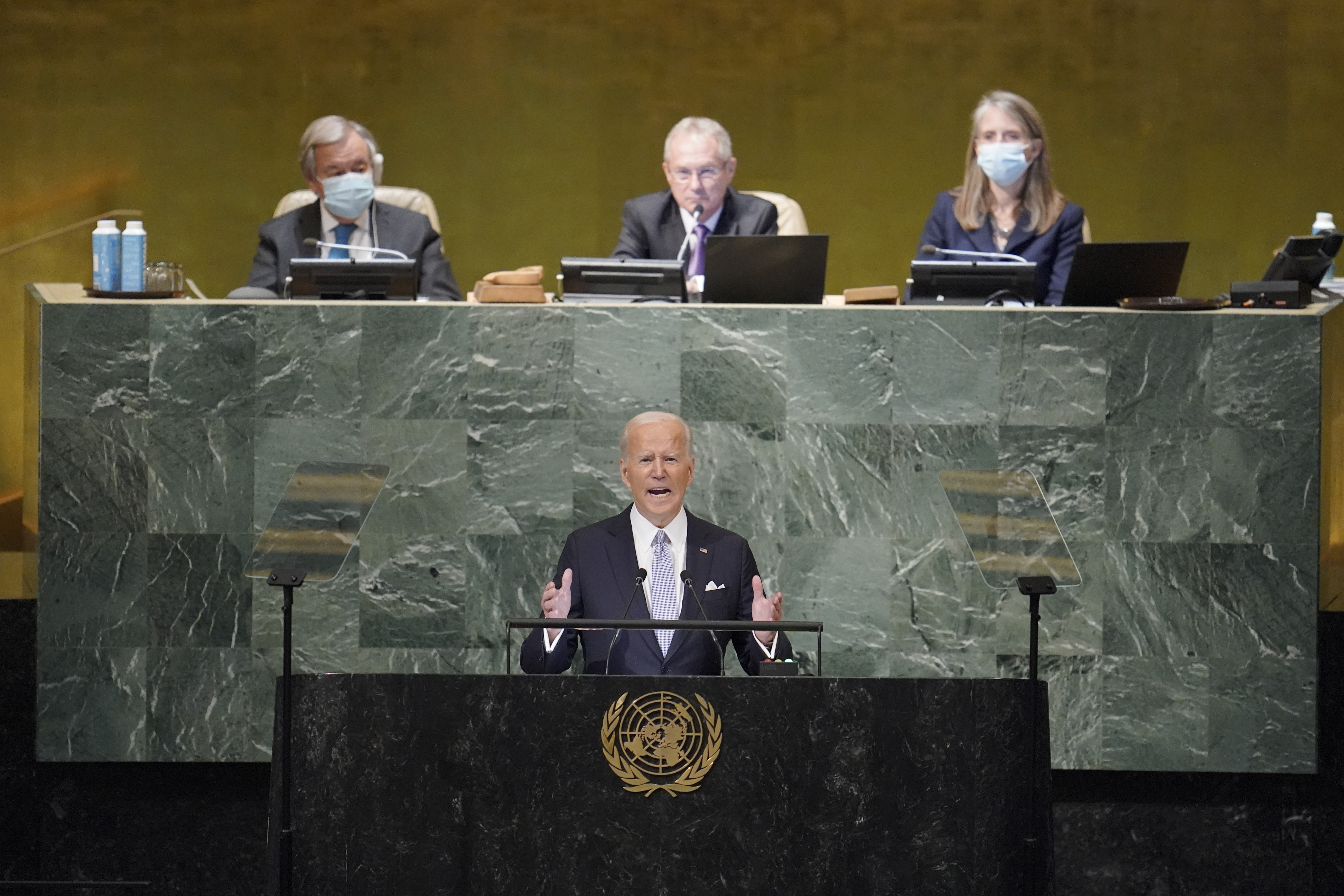 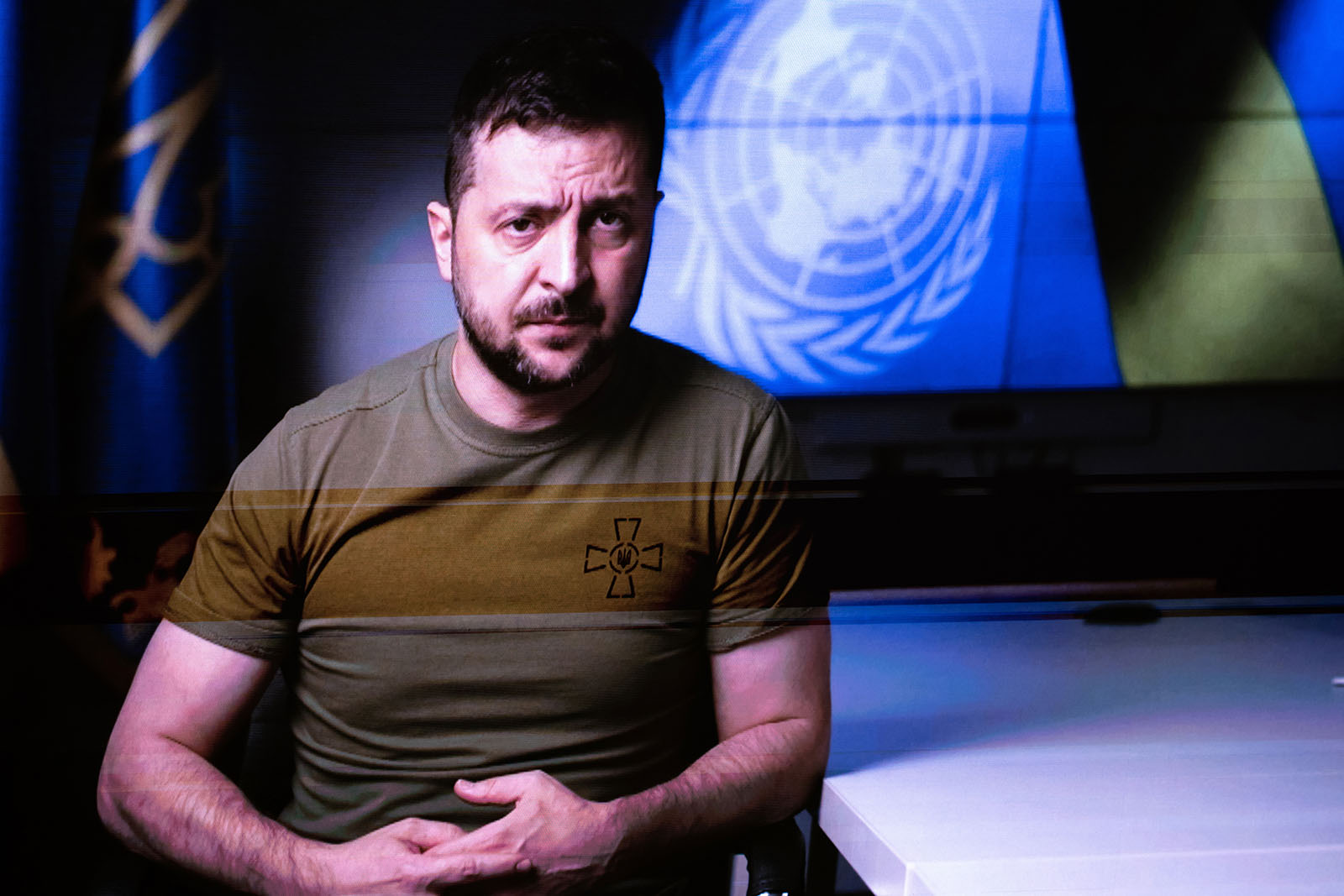 In a televised address Wednesday to the United Nations General Assembly, Ukrainian President Volodymyr Zelenskyy called on the world to punish Russia and insisted his country would prevail in the war. (AP/Julia Nikhinson)