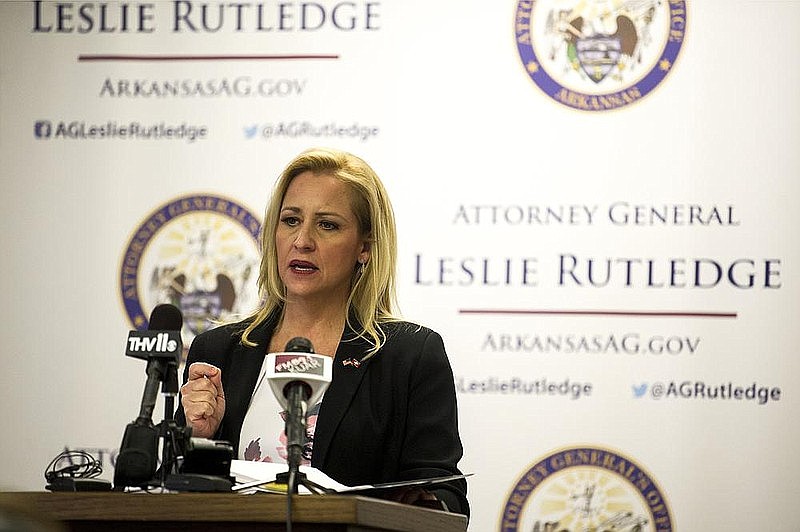 A bipartisan accountability group has filed an ethics complaint against Arkansas Attorney General Leslie Rutledge, accusing Rutledge of using her office to bolster claims of fraud in the 2020 election.

The 65 Project on Wednesday filed 15 complaints against state attorneys general, contending they tried to overturn the election results in 2020.

The complaint against Rutledge requests that the Office of the Committee on Professional Conduct in Little Rock review her actions for lending the legal profession's credibility to amplify false assertions and frivolous claims in regards to the election.

"Specifically Ms. Rutledge joined with other attorneys general and submitted a brief in support of the State of Texas's Bill of Complaint in Texas v. Pennsylvania before the United States Supreme Court," the complaint states. "The importance of so many attorneys general providing their support for the bogus effort cannot be overstated."

The complaint states the filing Rutledge joined was an example of political propaganda masquerading as analysis.

Amanda Priest, spokeswoman for the Arkansas attorney general's office, said Wednesday that the office was aware of the complaint filed against the 15 attorneys generals.

The attorneys general's positions in the Republican Attorneys General Association and its fundraising arm, the Rule of Law Defense Fund, also should draw the bar associations' scrutiny since those organizations played a role in encouraging the Jan. 6 riot at the Capitol, the accountability group said in a news release.

"Lawyers take an oath to stand as officers of the court and must follow a code of conduct and ethical requirements," said Michael Teter, managing director of The 65 Project. "That obligation does not end when holding public office. Just the opposite.

"State attorneys general have an even greater responsibility to abide by the rules of our profession. These lawyers tried to help Trump cling to power by spreading falsehoods and lies in court filings. They must be held accountable."

The complaint states Rutledge's leadership in an organization that encouraged "patriots" to join with them to "march to the Capitol building and call on Congress to stop the steal" on Jan. 6, 2021, and to "fight to protect the integrity of our elections" warrants further scrutiny.

"In fact, evidence suggests that Ms. Rutledge's official staff participated in 'War Games' strategy sessions held by these outside political groups, likely doing so while on government time," the complaint states. "A full investigation by your office will demonstrate the egregious nature of Ms. Rutledge's actions, especially when considered in light of her purposes and the direct and possible consequences of her behavior."

The group is called The 65 Project after the initial 65 lawsuits that sought to overturn the legitimate results of the 2020 election.

The organization states the lawyers who brought these suits abused the legal process and violated their professional duties to push the "Big Lie" narrative of former President Donald Trump to discredit current and future elections.

The senior advisor for the 65 Project is Melissa Moss, who previously served as a political appointee in the Clinton Administration and was the finance director of the Democratic National Committee.