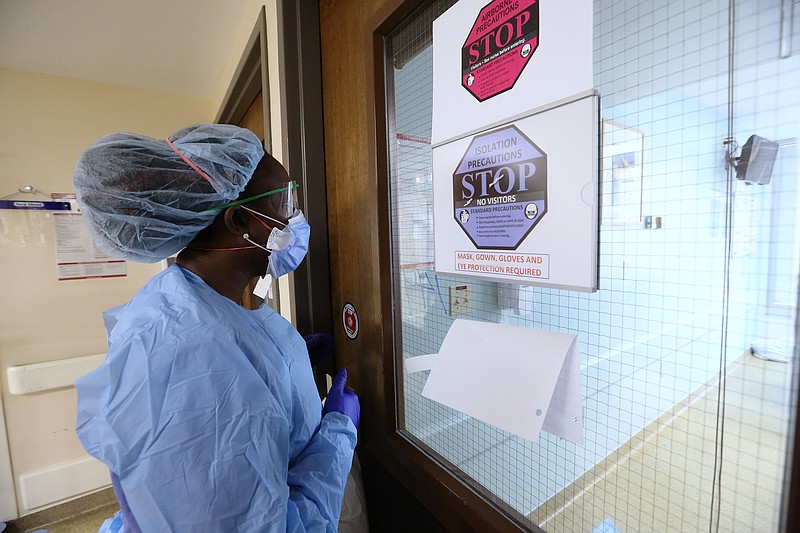 Nurse Brionna Rivers looks in the room of a Covid-19 patient while the patient is treated in one of the Covid wards at University of Arkansas for Medical Science on Thursday, July 22, 2021, in Little Rock. .More photos at www.arkansasonline.com/725covid/.(Arkansas Democrat-Gazette/Thomas Metthe)

The number of covid-19 patients in Arkansas' hospitals fell Wednesday for the first time in four days as the state's new case number continued to decline.

State Epidemiologist Mike Cima said all the deaths reported Wednesday happened more than a month ago.

After rising the previous three days, the number of covid-19 patients in the state's hospitals fell Wednesday by seven, to 289.

The number as of Wednesday was still up by three compared to its level a week earlier, however, and by 31 from the two-month low it hit early last week.

The state's count of cases rose Wednesday by 756. While larger by 121 than the increase Tuesday, it was smaller by 263 compared to the rise the previous Wednesday.

"All things taken together, I think it really emphasizes the point that we've been making for the past week or so in that covid cases and transmission seem to be subsiding a little bit after that little bump from both Labor Day and the start of school," Cima said.

"I think hopefully we'll start seeing those hospitalizations come down even further from what they did today."

In another indication that transmission was continuing to slow, Cima said 12.6% of the state's coronavirus tests were positive over the week ending Tuesday, which was about 2 percentage points lower than the percentage the previous week.

Pulaski County had the most new cases, 112, on Wednesday, followed by Craighead County with 46, Washington County with 40 and Benton and Saline counties, which each had 32.

Declining for the eighth day in a row, the average daily increase in the state's case count over a rolling seven-day period fell to 575, the first time it had been below 600 since June 11.

With recoveries outpacing new cases, the number of cases in the state that were considered active fell by 365, to 7,622, the smallest number since June 15.

After not changing the previous two days, the number of the state's virus patients who were in intensive care rose Wednesday by one, to 48.

Growing for the fourth consecutive day, the number on ventilators rose by two, to 22, the largest number since July 30.

At its hospitals in Little Rock and Springdale, Arkansas Children's had seven covid-19 patients on Wednesday, down from 10 on Tuesday and 14 the previous Wednesday, spokeswoman Hilary DeMillo said.

The University of Arkansas for Medical Sciences Medical Center it Little Rock had 13 covid-19 patients on Wednesday, down from 16 a week earlier, spokeswoman Leslie Taylor said.

She said the patients on Wednesday included two who were in intensive care and one who was on a ventilator.

Nine of the 13 patients had been fully vaccinated, she said. She said she didn't have information on how many had received booster shots.

Meanwhile, the university announced this week it had opened its first clinic specializing in patients who still have covid-19 symptoms three or more weeks after they test positive.

Taylor said UAMS treats long covid at its other clinics around the state, but the UAMS Health Long Covid Clinic in Fayetteville is the only one specializing in the condition.

"We had a faculty member, Dr. [Sheena] CarlLee, who was interested in having a clinic for long covid," Taylor said.

"The clinic is located on our Northwest campus where she has all the resources that they need like physical therapy, occupational therapy, pharmacy -- everything right there next to that space."