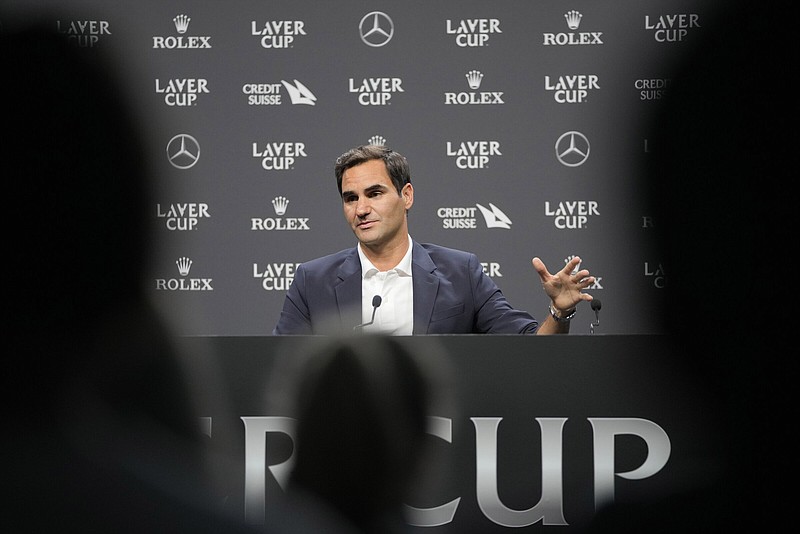 Roger Federer speaks to reporters Wednesday about his retirement from tennis following the Laver Cup in London. Federer said talk about his being the greatest tennis player of all time is “a good conversation, let’s be honest” and “definitely a fun debate.” (AP/Kin Cheung)

LONDON -- Roger Federer is a father of four -- two girls who are 13, two boys who are 8 -- and so perhaps that is why, as he wraps up his playing career, he thinks about the "GOAT" debate that has engulfed the tennis world the way parents might look at their children.

Folks love to ask: Who's the "Greatest of All-Time" in men's tennis, Federer, Rafael Nadal or Novak Djokovic?

"People always like to compare. I see it every day with my twins. Without wanting, you compare them. You shouldn't -- ever," Federer said during an interview with The Associated Press on Wednesday, hours after his farewell news conference at the arena that will host the 20-time Grand Slam champion's final competition, the Laver Cup.

"Naturally, we do the same in tennis. ... I am my own career, my own player, that needed those challenges. They needed a challenger like myself," he said, leaning back on a couch, having traded in the blue blazer and polo shirt he wore earlier for a post-practice navy pullover, white T-shirt and black jogger pants. "We made each other better. So at the end of the day, we'll all shake hands and be like, 'That was awesome.' Now is somebody going to be happier than the other? I mean, in moments, maybe."

He called the topic "a good conversation, let's be honest" and "definitely a fun debate" that "you can endlessly talk about."

"I always say it's wonderful to be part of that selective group," he began, talking about the so-called Big Three rivals, then paused to sigh.

Referring to Nadal, who is 36 and is expected to be Federer's doubles partner for his final match Friday, and Djokovic, who is 35, Federer said: "What I know is they are truly amazing and greats of the game and forever and will go down as one of the -- maybe THE -- greatest."

Federer, who is Swiss, grew up a basketball fan, and brought up the Michael Jordan vs. LeBron James back-and-forth from hoops.

He is adamant, though, that he will remain connected to tennis. That will include showing up at certain tournaments, he said, "to say farewell or goodbye, because I've been a part of those tournaments for 20 years."

It will include watching on TV, some of the time, and keeping an eye on results, all of the time.

He plans to keep tabs on Nadal, who won the Australian Open and French Open this season, and Djokovic, who won Wimbledon but couldn't enter the Australian Open or U.S. Open because he isn't vaccinated against covid-19 ("It's been quite strange not seeing Novak in a lot of the draws," Federer observed).

"At this point, once either they surpassed you, or you're not playing anymore, it doesn't matter how far up they go," Federer said. "For me, as long as I could be a part of it and control some of it, I cared more."

When it comes to the pursuit of more Grand Slam titles by Nadal and Djokovic, he said: "I hope they go and do everything they want. I really hope so. Because it would be great for the game and nice for their fans, for their family. As long as it makes them happy."

He gave credit to the various coaches and other members of his team through the years for helping push him.

That, Federer said, is nonsense.

"We need inspiration. We need motivation. We need people to kick our [butt] and tell you, 'OK, put on your shoes and go for a run. Put on your shoes and let's go practice. I know you don't want to do it here. I actually also don't want to be here, but let's still do it. And then you can go relax,' " he said. "It's a challenge. But a good one. And I would do it all over again."

And then he smiled. 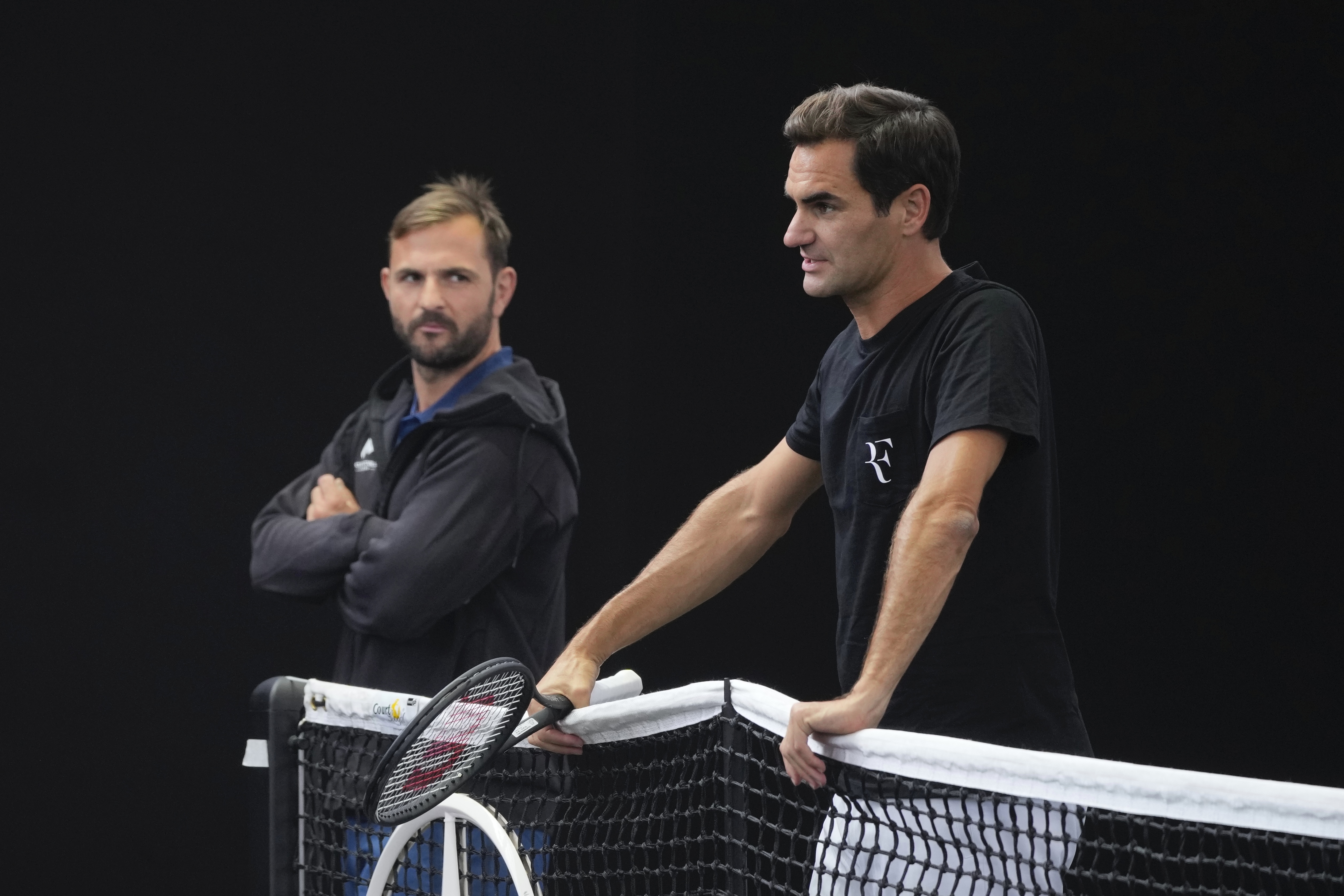 Switzerland's Roger Federer, right, attends a training session ahead of the Laver Cup tennis tournament at the O2 in London, Wednesday, Sept. 21, 2022. Federer appeared earlier at a news conference to discuss his retirement from professional tennis at age 41 after a series of knee operations. He will close his career with a doubles match at the Laver Cup on Friday. (AP Photo/Kin Cheung)

Switzerland's Roger Federer attends a training session ahead of the Laver Cup tennis tournament at the O2 in London, Wednesday, Sept. 21, 2022. Federer appeared earlier at a news conference to discuss his retirement from professional tennis at age 41 after a series of knee operations. He will close his career with a doubles match at the Laver Cup on Friday . (AP Photo/Kin Cheung) 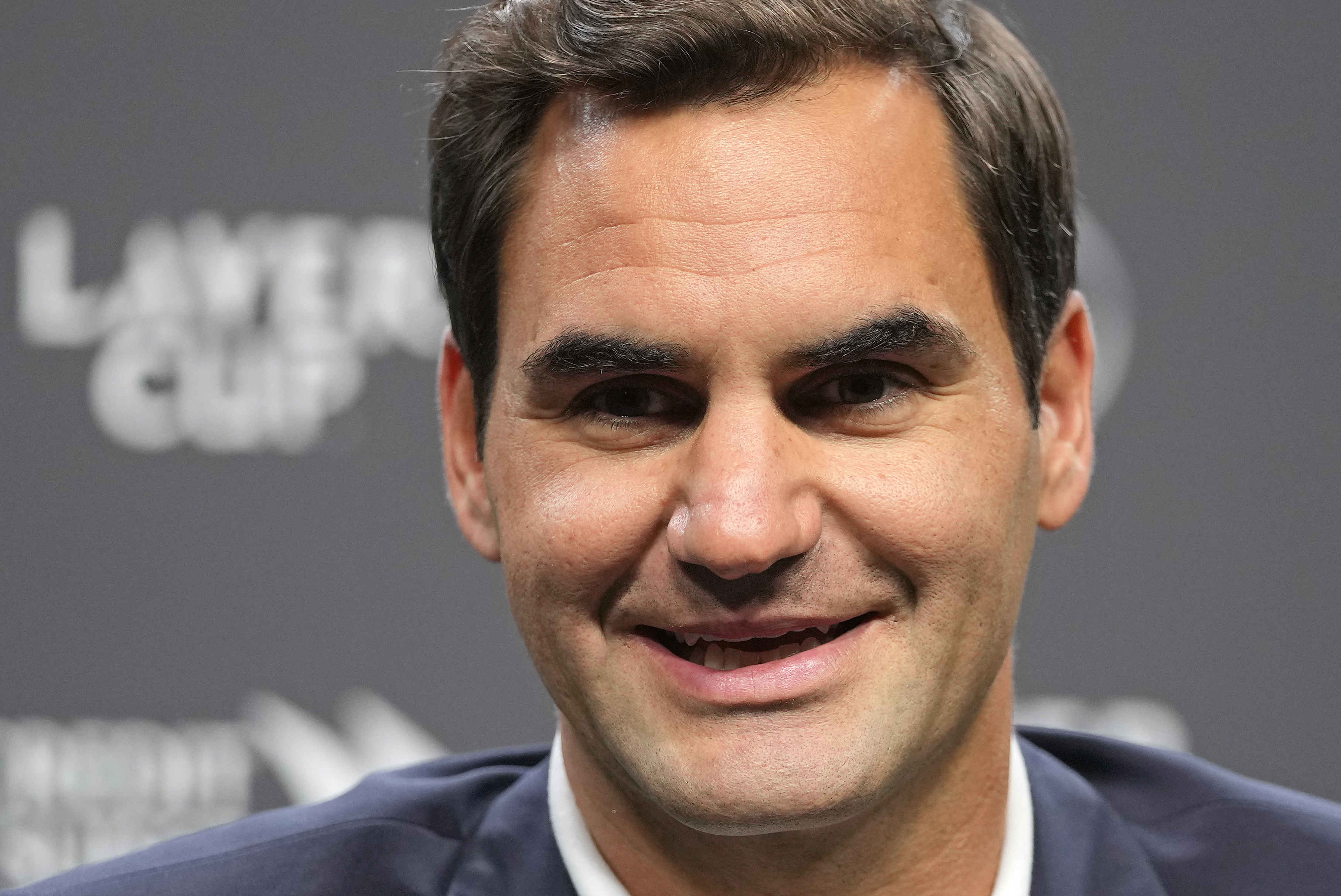 Switzerland's Roger Federer smiles during a media conference ahead of the Laver Cup tennis tournament at the O2 in London, Wednesday, Sept. 21, 2022. Federer will meet with the media Wednesday to discuss walking away from the game at age 41 after 20 Grand Slam titles. (AP Photo/Kin Cheung) 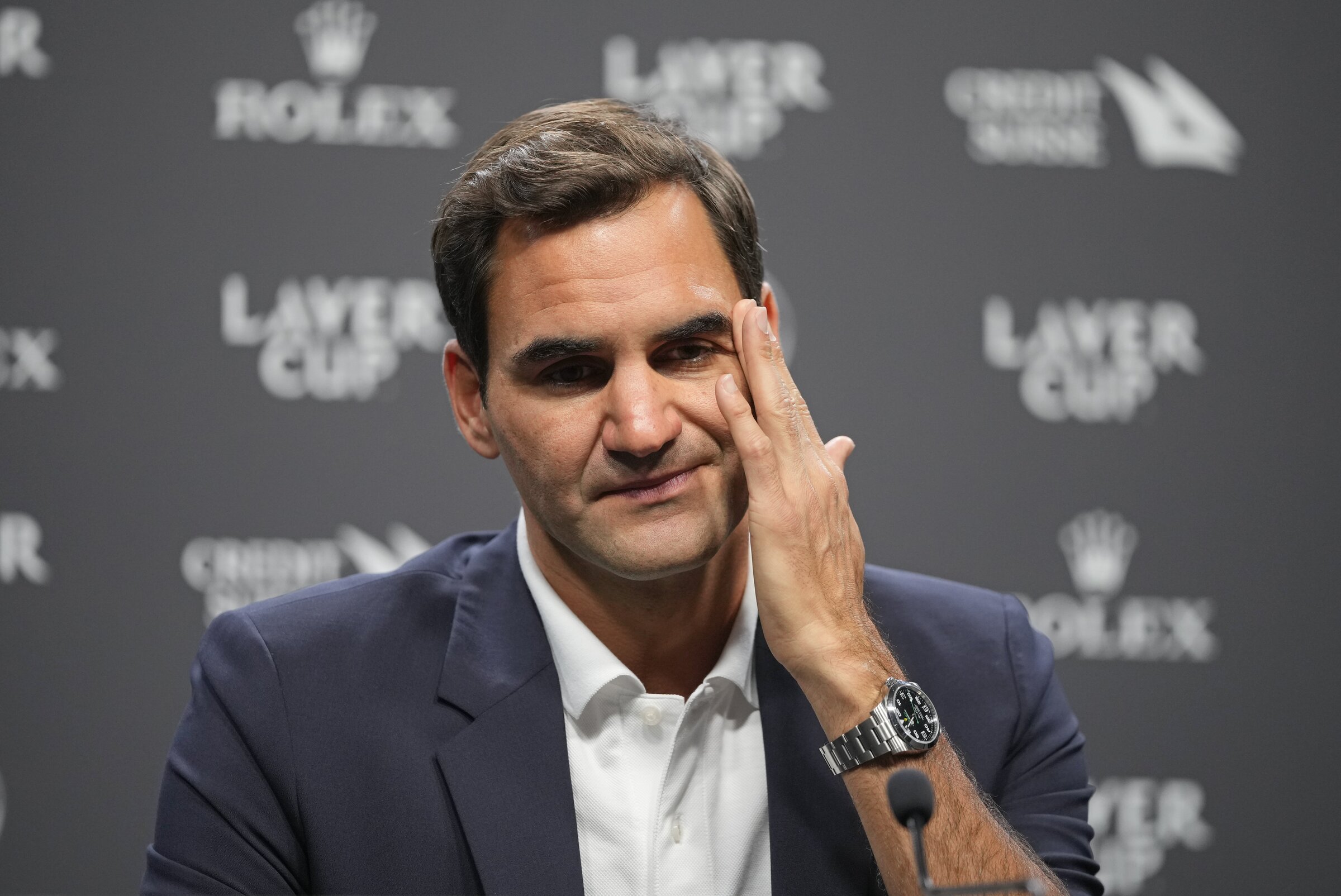 Roger Federer says he is at peace to retire from professional tennis and plans to close his career with one doubles match at the Laver Cup, perhaps with longtime rival Rafael Nadal by his side. The 20-time Grand Slam champion announced last week via social media that he would be retiring. (AP/Kin Cheung)