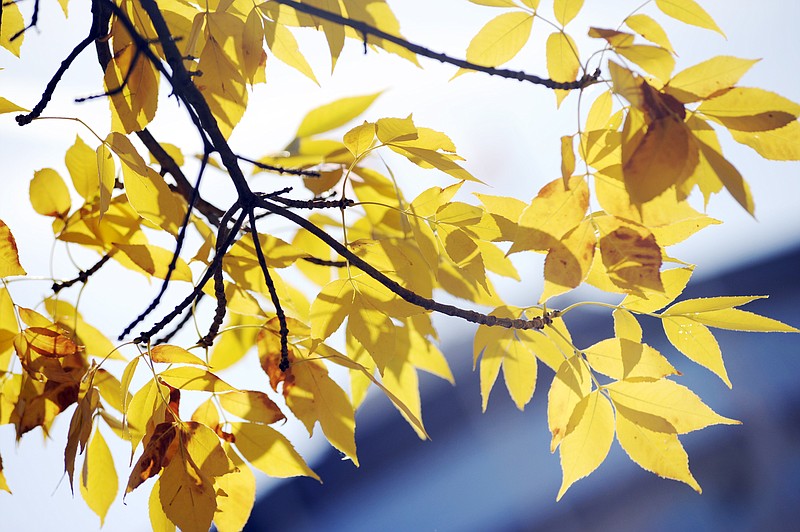 In this September 30, 2011 photo, leaves begin to display their autumn colors in downtown Jefferson City.

Arkansans can expect cooler weather in the coming days and next week to bring in the fall season, though they will see more “summertime” temperatures over the first half of the weekend, according to the National Weather Service.

Fall officially begins Thursday night. Jeff Hood, a meteorologist with the weather service in North Little Rock, said temperatures in central Arkansas will fall into the lower 60s, with some areas dropping into the upper 50s.

“That’s about 10 to 15 degrees cooler than what we’ve been seeing the last few mornings, so it does look like it’s going to be more pleasant, and briefly feel a little more fall-like out there this evening and tonight,” he said.

However, highs on Friday will range from the upper 70s across northeast Arkansas to the upper 80s and lower 90s across southern and western portions of the state. In central Arkansas, temperatures will top out in the mid to upper 80s, according to Hood.

“That’s only going to get worse, unfortunately,” he said.

While the meteorologist said Saturday will start out in the 60s, much of the state will reach above 90 degrees in the afternoon. Southern, western, and central Arkansas are forecast to climb into the mid 90s with some spots “even taking a run at 100 degrees or so.”

“We’re just now starting to transition out of summer and into fall, and it’s not all at one time,” Hood said. “We typically get these little tastes of fall, maybe retreat back to hot temperatures, and then eventually, October, November, that’s when we get the better potential for the much cooler weather across the area.”

Lower temperatures are expected to make a return Sunday through the beginning of next week for most parts of the state, Hood said.

“Especially as we go through next week, it does look like things will be a whole lot more comfortable outside, as a strong, cold front is expected,” he said.

Temperatures will mostly be in the 70s and 80s Monday through the middle of next week. Hood said, with cooler and drier air in place, overnight lows will drop into the 50s in central Arkansas and some portions of northern Arkansas will dip into the upper 40s next week.

The potential of widespread rain for most parts of the state is “one thing that is missing from the forecast,” Hood said.

There will be a few showers Saturday and Sunday as the next cold front comes through.

“Beyond that and continuing through next week, it doesn’t look like there will be any rain across the state,” he said.

According to a tweet from the weather service, temperatures were reported to be in the lower to upper 30s across western and northern Arkansas, and in the mid-30s to lower 40s elsewhere, on Sep. 22, 1983.

“For much of September so far, things have obviously been unseasonably hot and September is obviously one of the drier months across Arkansas typically speaking, but this has been very dry or even more dry than normal,” Hood said.

When asked how weather drastically changes from hot to cold in the matter of one day, he explained it’s due to air masses transiting during this time of the year.

“It’s basically when we have a collision of hot versus cold,” he said. “I mean June, July, August, we anticipate it’s gonna be hot and there’s gonna be occasional storm systems coming in and maybe it makes things cooler, but we’re starting to get to that time of the year where the sun angle becomes lower, more cold air from the northern portion of the world becomes dislodged and starts to make its way south.”

“Some people get excited about everything fall – leaves changing, cooler temperatures, coffee-related items, and other stuff like that, but really September is more or less an extension of summer for most of us here in Arkansas.”