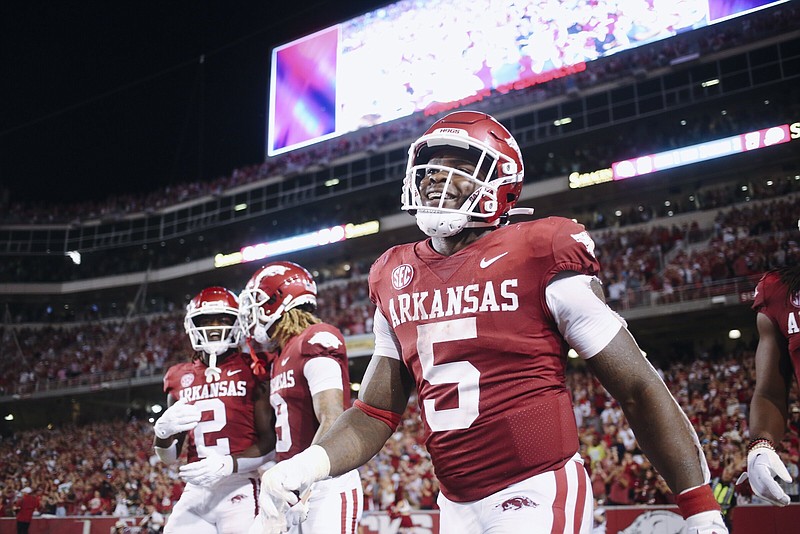 Arkansas running back Raheim Sanders (5) leads the SEC in rushing with 146.7 yards per game, which also ranks third in the FBS. Sanders has rushed for 440 yards and 3 touchdowns on 66 carries for the 10th-ranked Razorbacks, who face No. 23 Texas A&M on Saturday at AT&T Stadium in Arlington, Texas. (NWA Democrat-Gazette/Charlie Kaijo)

FAYETTEVILLE -- Jimmy Smith made the call on Aug. 6, the second day of preseason training camp for the University of Arkansas.

On that day, the Razorbacks' running backs coach said Raheim "Rocket" Sanders had done so well over spring drills and the summer that he had earned a larger chunk of playing time and carries. That signaled a departure from the unit's splits among Trelon Smith, Dominique Johnson, Sanders and even AJ Green in 2021.

Coach Sam Pittman acknowledged the Razorbacks were leaning in that direction as well, and Green, a sophomore, interviewing with members of the media the same day as Smith, volunteered that Sanders had "earned" that distinction.

Still, hardly anyone could have predicted how Rocket would take off.

The 6-2, 227-pound sophomore leads the SEC and ranks third in the FBS with 146.7 rushing yards per game. His 66 carries have been largely efficient as well. Among players with 50-plus attempts, Sanders' 6.67 yards per carry ranks fourth in the country behind Florida Atlantic's Larry McCammon III (7.3), Arizona State's Xazavian Valladay (6.94) and Minnesota's Mohamen Ibrahim (6.93).

After Sanders compiled 242 all-purpose yards, including a career-high in rushing (167) for the second consecutive week in last Saturday's 38-27 win over Missouri State, he was asked if he felt he was making a statement on the national scene.

"Yeah, I definitely feel like I'm making a statement," he said. "But I feel like with this game, I had a lot of MAs [missed assignments] and that started off with the first quarter. Just trusting the offense and trusting my reads helped me out with that."

Sanders has carried the ball on 72% of the rushes by Arkansas running backs, higher than the 50% Smith projected six weeks ago and more than Pittman expected.

"I expected him to be a really good player," Pittman said. "I don't know if expected us to use him as much as we have."

Reserves Green and Rashod Dubinion might have received more playing time if Arkansas had grown a lead against Missouri State that didn't materialize.

In fact, the Razorbacks trailed 27-17 when Sanders took a shovel pass from KJ Jefferson, pulled free from a jersey grab and blasted 73 yards for his second touchdown of the game with 11:38 left.

"I actually ran that against South Carolina and it didn't work," Sanders said. "Well, it worked but I didn't read it how I was supposed to read it. I feel like getting that play called, I got chills. I got chills knowing I was going to take it far, if not to a touchdown."

Pittman said Sanders' evolution from a multi-purpose skill star who played mostly receiver at Rockledge (Fla.) High School toward more of a complete tailback has been remarkable.

"He's a big, powerful guy too, but he's a smart runner," Pittman said. "He's learning that when you get wrapped up by a couple of guys that it's time to get down ... instead of standing there and taking the guy coming from 10 yards away and knocking the heck out of him."

"He probably hits his stride faster than he was last year because he's seeing things quicker, which allows for those little longer runs," Pittman said.

Coaches and teammates testify to Sanders' commitment to being great.

"It's really fun to block for him," Jones said. "He's a great kid. Always on time, always doing the right thing."

Said receiver Matt Landers, "He's always taking care of his body, does everything right. He's somebody you can depend on."

Pittman said Sanders has a reputation for being early to the study table and being an academic leader as well.

"That's probably what makes him good. He's very talented, but his want-to is higher than his talent, if that makes sense. Just a really, really fine kid and he takes things personal."

An example of that came last Saturday. Sanders lost a fumble inside the Missouri State 1 that the Bears eventually cashed in for a touchdown to take a 17-0 lead. He said his 242-yard performance did not make up for that critical turnover, the first lost fumble for an Arkansas running back this season.

"The thing with him that was amazing to me is how in everything he does -- school, football, film -- he wants to be great," Smith said. "He came in and running back wasn't really his specialty. He got the ball, but he didn't really understand how to play running back. He put the work in and the time, and he's getting better and better at it. He came a long way in a year."