Harsin has a big fan in Drinkwitz 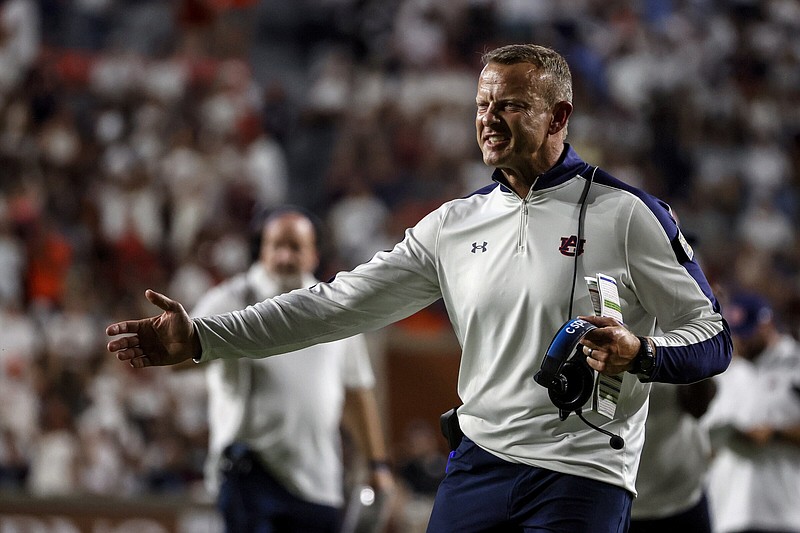 Auburn’s Bryan Harsin (above) and Missouri’s Eli Drinkwitz are set to face each other as head coaches for the first time Saturday when the teams play at 11 a.m. at Jordan-Hare Stadium in Auburn, Ala. (AP/Butch Dill)

Eli Drinkwitz said he wouldn't be Missouri's coach if not for Auburn Coach Bryan Harsin.

The two will be on opposing sidelines Saturday when Missouri plays at Auburn for the first time.

It also will be the first time Drinkwitz and Harsin have faced each other as head coaches.

"I have a lot of respect for him as a football coach and as a person."

Drinkwitz, an Alma native, was the running backs coach at Arkansas State University in 2012 for Coach Gus Malzahn.

When Malzahn left ASU to become Auburn's coach in 2013, Drinkwitz had a chance to go with him to the Plains. But his position would have been on the off-the-field support staff rather than the on-field coaching staff.

When Harsin left ASU to take the Boise State job in 2014, Drinkwitz went to Idaho with him as tight ends coach. Drinkwitz then was promoted to offensive coordinator and quarterbacks coach at Boise State.

Being a coordinator with a successful Boise State program helped Drinkwitz get hired as offensive coordinator at North Carolina State, which led to his first head coaching job at Appalachian State.

Drinkwitz was hired at Missouri after leading Appalachian State to a 12-1 record in 2019.

"There is no way in the world I'd be where I'm at today without Bryan Harsin," Drinkwitz said.

Georgia Coach Kirby Smart always speaks highly of his former assistants who have become head coaches, including Sam Pittman at the University of Arkansas, Shane Beamer at South Carolina and Dan Lanning at Oregon.

Smart has credited them with helping him build a program that won a national championship last season.

But those relationships haven't stopped Smart's Bulldogs from pounding the Razorbacks, Gamecocks and Ducks in matchups the past three seasons.

Pittman, Georgia's offensive line coach from 2016-19, didn't realize when he got the Arkansas job that Smart would be his first opponent.

The Razorbacks weren't scheduled to play the Bulldogs in 2020, but when the SEC made the decision to play conference games only because of covid-19 safety protocols, Georgia became Arkansas' opener.

The Bulldogs beat the Razorbacks 37-10 in Fayetteville. Arkansas went into Athens, Ga., ranked No. 8 last season and was sent home with a 37-0 loss by the No. 2 Bulldogs.

Georgia opened this season against Lanning -- a Georgia assistant since 2018 and the defensive coordinator last season -- and No. 11 Oregon in Atlanta. Smart welcomed Lanning to the college head coaching world by beating the Ducks 49-3.

Arkansas doesn't have Georgia on its schedule this season, but the Razorbacks and Bulldogs theoretically could meet in the SEC Championship Game. As tough as Smart has been on his former assistants, that's a matchup Pittman would welcome.

Alabama senior offensive tackle Tyler Steen will face his old team when the No. 2 Crimson Tide open SEC play against Vanderbilt on Saturday.

Steen made 33 consecutive starts for Vanderbilt the previous three seasons before transferring to Alabama.

"I would say how we work is different," Steen said this week when he met with reporters. "It's different over here for sure -- different expectations, different people around you that expect you to do what needs to be done at your highest capability.

"I would definitely say the cultures are different, but everywhere you've got to work hard."

"He's a very athletic guy," Tide Coach Nick Saban said. "He's got really good power for his size. And is a good pass blocker. Very smart guy. Understands how to play fundamentally, use his hands, and has played pretty consistently for us in the three games that he's played.

"Has certainly not disappointed us in any way, shape or form. He's got a lot of experience, which I think helps. We're very pleased that he's here."

South Carolina Coach Shane Beamer found himself apologizing after Georgia beat the Gamecocks' 48-7 last week, and it had nothing to do with the lopsided score.

When Beamer expressed his frustration during the game that South Carolina female athletes didn't get off the Williams-Brice Stadium field fast enough after they were recognized during the break between the first and second quarters, it was a bad look that caused some negative publicity.

The 275 females who compete for South Carolina teams were on the field to be honored in conjunction with the 50th anniversary of the passage of Title IX legislation.

But Beamer didn't know that's why they were on the field. He just knew that with his team trailing 14-0 after the first quarter and going for a first down on fourth-and-9 from the Georgia 37, having people on the field delayed the second quarter starting and gave the Bulldogs more time to see the Gamecocks' formation and personnel.

With the ESPN cameras focused on him, Beamer yelled at the female athletes to "Get off the field!" and made demonstration motions with his arms.

When play finally resumed, Georgia held South Carolina to a 4-yard gain on a pass completion to end the scoring threat.

"All female student-athletes were asked to come to the game to recognize 50 years of Title IX," South Carolina soccer player Jyllisa Harris posted on her Twitter account along with video of Beamer looking agitated and yelling. "We were on the field for maybe 15 seconds then screamed at to get off. If you want to honor female student-athletes, then do that, not this."

The video of Beamer had more than 2 million views on social media as of Monday.

When Beamer spoke with the media on Sunday, he apologized.

"My initial reaction was to yell, 'Get off the field,' " Beamer said. "I had no idea who was down there. I apologize to anyone that I offended.

"Certainly I know game management has a tough job and a lot of moving parts. I'm sure they feel like they could be better in that situation in regards to when and how we honored those female student-athletes and more importantly how to get them off the field a lot quicker than what we were able to when the ceremony was over.

"I hope people know me well enough to know what an advocate I am for women's sports. I've got two daughters of my own that play sports. I'm at as many women's athletic events at Carolina as I can possibly be because I believe in them and support them, and anyone that thinks otherwise surely doesn't know me."

"There is just still work to do!" Harris tweeted. "Coach Beamer however was coaching in the heat of the game and has been nothing but supportive of female sports."

"I'm not joking. I told them this morning, you have to understand rat poison," Kiffin said at his Monday news conference to preview Saturday's game against Tulsa. "It's out there, and it comes when you play really well, especially when the outcome is what it looks like, with the score."

The Rebels ran over Georgia Tech with 316 rushing yards and six touchdowns, and Ole Miss shut out a Power 5 Conference team for the first time since beating Mississippi State 45-0 in 2008,

"Now our running backs are hearing how great they are, and the defense and everything," Kiffin said. "We have to keep plugging along, and every week is independent from the week before. These guys have to learn that it doesn't matter what you did the week before."

Kiffin got the "rat poison" analogy from Alabama Coach Nick Saban. He was Saban's offensive coordinator with the Tide from 2017-19.

Through three quarters of LSU's game against Mississippi State, the Tigers were 0 of 8 on third-down conversion attempts.

That flipped in the fourth quarter when LSU went 6 of 7 on third down conversions and came back to win 31-16 after trailing 16-10 through three quarters.

The Tigers outgained the Bulldogs 175 yards to 44 in the fourth quarter and held the ball for 11:20 of the 15 minutes.

Vanderbilt's series against Alabama started off well for the Commodores.

Alabama finally beat Vanderbilt 14-7 in 1920. The Tide has mostly rolled since then and now holds a 62-18-4 series advantage.

The Tide will be looking to beat the Commodores for the 23rd consecutive time when the teams play Saturday at Bryant-Denny Stadium, where Alabama is 16-1 against Vanderbilt.

The Commodores' last victory over the Tide was 30-21 in 1984 at Bryant-Denny Stadium.

Stephens had an 82-yard return to help the Razorbacks rally for a 38-27 victory over Missouri State.

Alabama's Malachi Moore had to go just 3 yards for a touchdown when he blocked a punt.

Hyatt has become the top target for Volunteers quarterback Hendon Hooker. He’s averaging an SEC-best 6 receptions per game and on the season has 18 catches for 267 yards and 2 touchdowns. In a preview of things to come, Hooker and Hyatt connected on a 23-yard touchdown pass against Ball State in the Vols’ first offensive play this season. He’ll be looking to make more big plays against Florida on Saturday.

Arkansas survived a scare from Missouri State and Bobby Petrino last week while Texas A&M bounced back from an upset loss to Appalachian State by beating Miami.

It will be the first game away from their campus stadiums for the Razorbacks and Aggies, though Arkansas is the designated home team this game.

After beating Texas A&M 20-10 last season to end a 9-game losing streak in the series, Arkansas will be looking to beat the Aggies in consecutive years for the first time since a three-game winning streak from 2009-11 when it was a nonconference matchup.

Kent State at No. 1 Georgia

Northern Illinois at No. 8 Kentucky

Vanderbilt at No. 2 Alabama

21-0 Margin LSU outscored Mississippi State in the fourth quarter to rally for a 31-16 victory.

6 Rushing touchdowns for Ole Miss in the Rebels’ 42-0 victory at Georgia Tech.

“Hell no! What kind of a question is that? We’re 1-2 and we’ve got a bunch of fighters in that room. And ‘give up,’ that’s not part of this football program. Get out of here, man.”

South Carolina Coach Shane Beamer when asked after Georgia’s 48-7 victory over the Gamecocks if he sensed any “give up” in the locker room.

“I would categorize every Saturday as a must-win. I mean, that’s why we do what we do, right? I don’t think there’s a game we’ve ever told anybody, ‘Hey, if we lose this one. Wwe’ll be alright. We’ll get on to the next one.’ ”

“I thought all three sides buckled at key times. I think that the other guy had something to do with it, too. LSU’s a good team and has good players.” 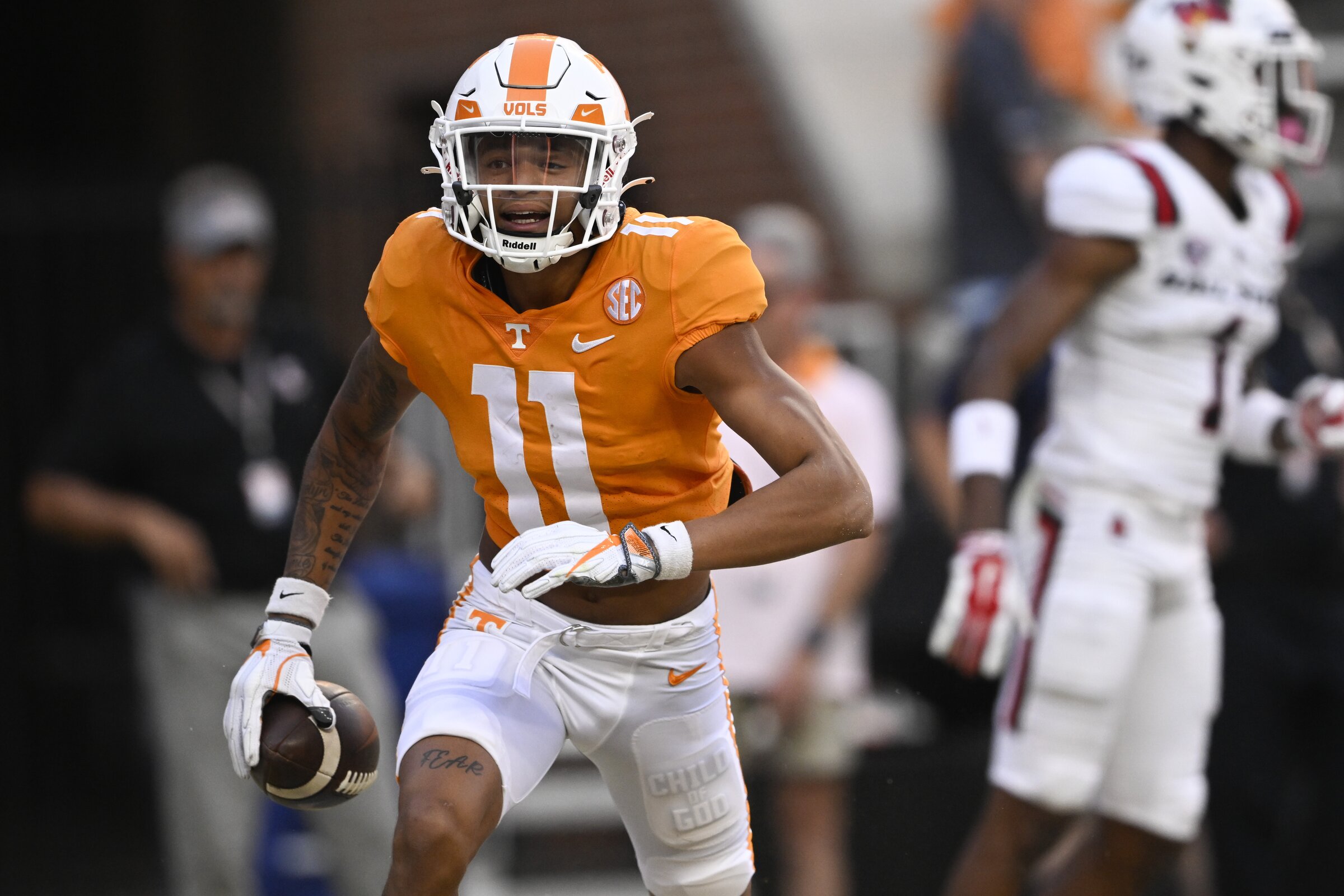 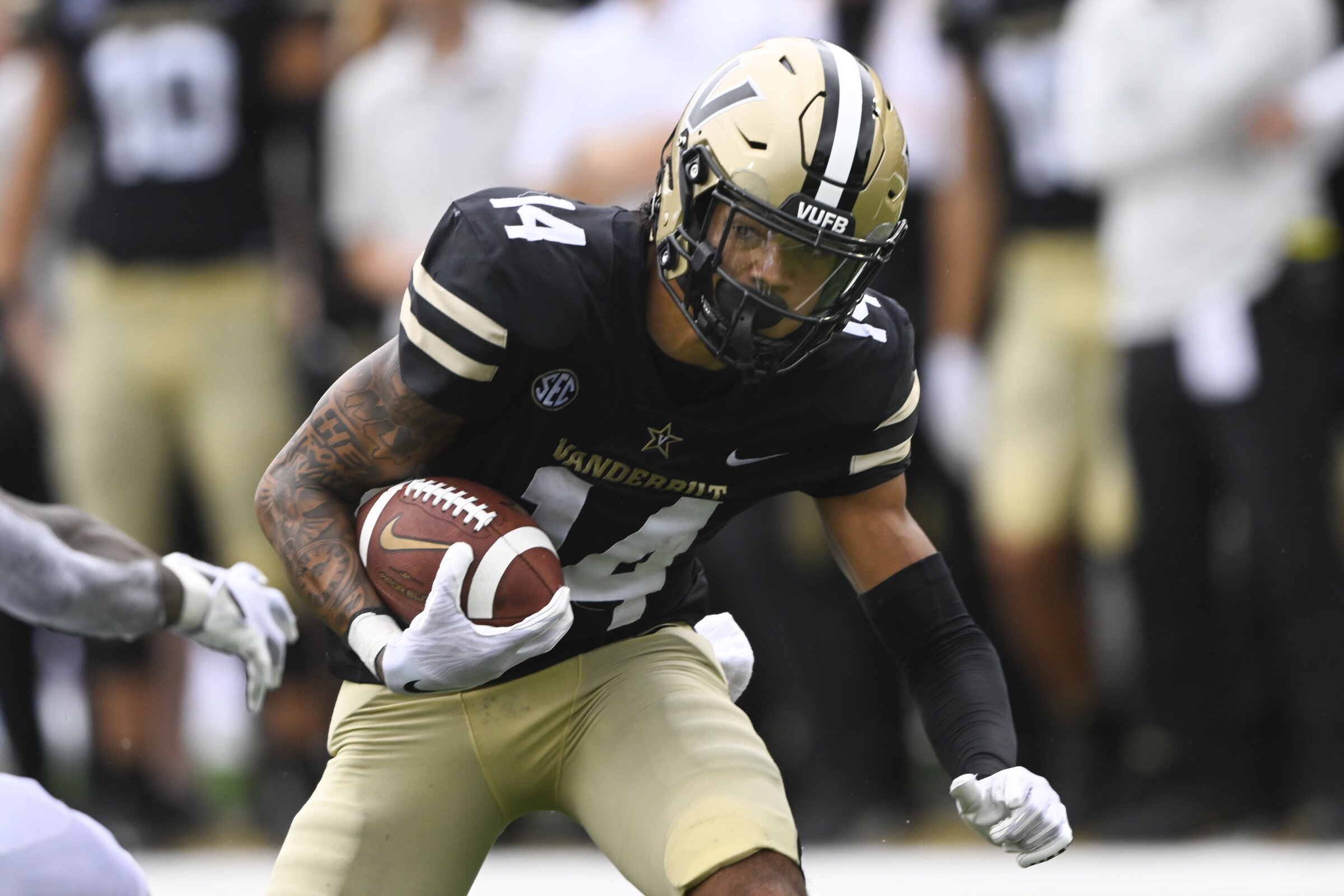 Print Headline: Harsin has a big fan in Drinkwitz