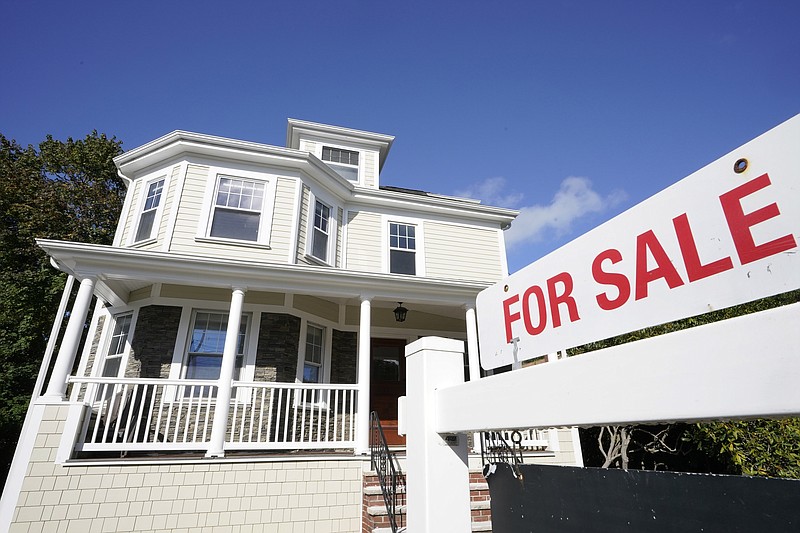 FILE - A for sale sign stands in front of a house on Oct. 6, 2020, in Westwood, Mass. Sales of previously occupied U.S. homes slowed in August 2022 for the seventh month in a row, as sharply higher mortgage rates and rising home prices made homebuying less affordable. (AP Photo/Steven Senne, File)

Sales of previously occupied U.S. homes slowed in August for the seventh month in a row, as sharply higher mortgage rates and rising prices made homebuying less affordable, further cooling the once red-hot housing market.

The National Association of Realtors said Wednesday that existing home sales fell 0.4% last month from July to a seasonally adjusted annual rate of 4.80 million. That's higher than what economists were expecting, according to FactSet.

Sales fell 19.9% from August last year and are now at the slowest annual pace since May 2020.

The national median home price jumped 7.7% to $389,500 in August from a year earlier. As the housing market has cooled, home prices have been rising at a more moderate pace after surging annually by around 20% earlier this year. Before the pandemic, the median home price was rising about 5% a year.

The August sales report is the latest evidence that the housing market, a key driver of economic growth, is slowing from its breakneck pace in recent years as homebuyers grapple with the highest mortgage rates in more than a decade, as well as inflation that is hovering near a four-decade high.

The average rate on a 30-year home loan rose to 6.02% last week, eclipsing 6% for the first time since November 2008, according to mortgage buyer Freddie Mac. A year earlier, the rate averaged 2.86%.

Mortgage rates eased in July after climbing in June, which may have helped motivate homebuyers last month, limiting the sales decline. More recently, however, rates have been rising again along with the 10-year Treasury yield, which influences home loan rates.

The 10-year yield traded at its highest levels since 2011 on Tuesday, reflecting expectations of further interest rate increases by the Federal Reserve in its bid to squash inflation.

Higher home prices and mortgage rates have pushed mortgage payments on a typical home to $1,643 a month, from $897, an 83% increase over the past three years, according to an analysis by real estate information company Zillow.

Surging home loan rates don't just make homes less affordable, they also discourage homeowners who locked in an ultra-low rate the last couple of years from buying a new home. That, in turn, can limit the number of homes that are available for sale.

Some 85% of U.S. homeowners with a mortgage now have a rate well below 6%, according to Redfin. The disparity gives less incentive to these homeowners to sell and buy another home, because taking on a higher mortgage rate would mean paying more over the life of the loan and also a bigger monthly payment.

In the four weeks that ended Sept. 11, home listings fell 19% from a year earlier, the largest drop since May 2020, the real estate association said.

Some 1.28 million homes were on the market at the end of August, down 1.5% from July and flat versus August last year, according to the association.

On average, homes sold within just 16 days of hitting the market last month, up from 14 days in July. Before the pandemic, homes typically sold more than 30 days after being listed for sale.

At the current sales pace, the level of for-sale properties amounts to a 3.2-month supply, Yun said.

That's unchanged from July and higher than the 2.6-month supply in August last year. In a more balanced market between buyers and sellers there is a 5- to 6-month supply.