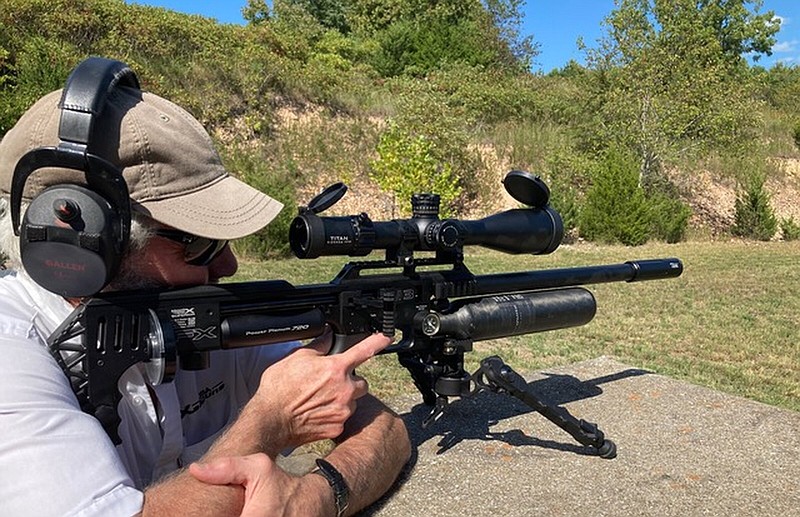 BRANSON, Mo. -- Airguns, airbows and thermal optics are some of the most exciting new innovations in shooting and hunting.

These items highlighted new offerings in the shooting and hunting world Tuesday at an event at the Ozark Shooting Sports Complex. The event was part of the Association of Great Lakes Outdoor Writers annual conference.

One of the most interesting items was a Umarex Air Javelin, an air-powered bow. Based in Fort Smith, Umarex is one of the world's premier brands of pneumatic guns. Scott Faldon, a former reporter for the Southwest Times-Record in Fort Smith, is marketing manager for Umarex. He treated us to a range session with the Air Javelin, Umarex's introductory air bow model. Umarex's Air Sabre is popular in some circles, enabling users to accurately shoot special bolts, or arrows, up to 100 yards.

The Air Javelin is less powerful. For average shooters, its lethal range on deer size game is about 30-35 yards. In more experienced hands, it is lethal to about 50 yards.

It is not legal to hunt deer with air bows in Arkansas. The only states that allow it for the 2022 hunting season are Alabama, Arizona, Maryland, Missouri, North Carolina, Oklahoma, South Carolina, Utah, Virginia and Washington. Those states classify air bows as guns, and they they may only be used during modern gun deer season.

Air bows are much lighter than crossbows, and they do not require cocking a high-tension string. This makes them suitable for elderly hunters or hunters with orthopedic injuries that prevent them from using crossbows, compound bows or traditional bows.

The Umarex Air Sabre propels arrows from a tank charged to 3,625 pounds per square inch. The launch velocity of a bolt at maximum pressure is about 450 feet per second.

The Air Javelin is not as powerful and is powered by a pre-charged carbon dioxide canister and launches a 1700-grain air bolt at about 300 fps. A canister will launch about 20 "effective" shots. After that, velocity diminishes so much that an air bolt will not reach a target at point of aim at 30 yards. Faldon bounced one into the target at 30 yards with a shot fired from a nearly spent canister.

Like the Air Sabre, the Air Javelin is very easy to use. It comes with three special air bolts that slip over a nozzle at the muzzle. Cock the charging handle once, release the safety to the fire position and pull the trigger. That's all there is to it.

It is not foolproof, however. You must take care to actually slide the air bolt over the nozzle. There is enough room to the sides to slide the arrow into the muzzle beside the nozzle. This happened on my first attempt.

Sighting devices that use a target's thermal signature allow hog hunters, varmint hunters and target shooters to use their firearms at night.

A paper target does not emit enough heat to register with a thermal optic's sensors, so target shooters use handwarmers or small ice bags that are significantly hotter or colder than ambient temperature, said Brad Bonar, customer service manager for FX Airguns USA. This also works during the daytime. I tested two thermal units this way with two AR-15 style rifles. The introductory unit costs about $800, and the higher end unit costs about $3,600. There is a significant difference in clarity, brightness and resolution, but the introductory unit is ideal for shooters that want to enter this arena gently.

In bright light, the more expensive units very clearly identify targets. Images are not distorted at all. They are at their best in darkness, when they show anything that emits a heat signature.

Of course, thermal optics do not necessarily have to be used for shooting. They can be used for watching wildlife at night, when they clearly identify deer, raccoons and other animals that are most active at night.

Sighting in a thermal optic is different than sighting in a traditional optic, or scope. Sighting in a scope involves turning turret adjustments to move a reticle vertically and horizontally until a shooter attains a desired point of aim and point of impact.

A thermal optic is computerized. If your point of impact is high and right at 100 yards, for example, you simply move align the x and y axis electronically.

Prices for thermal units have decreased almost tenfold in the last 10 years. They will probably become even more affordable as the technology evolves.