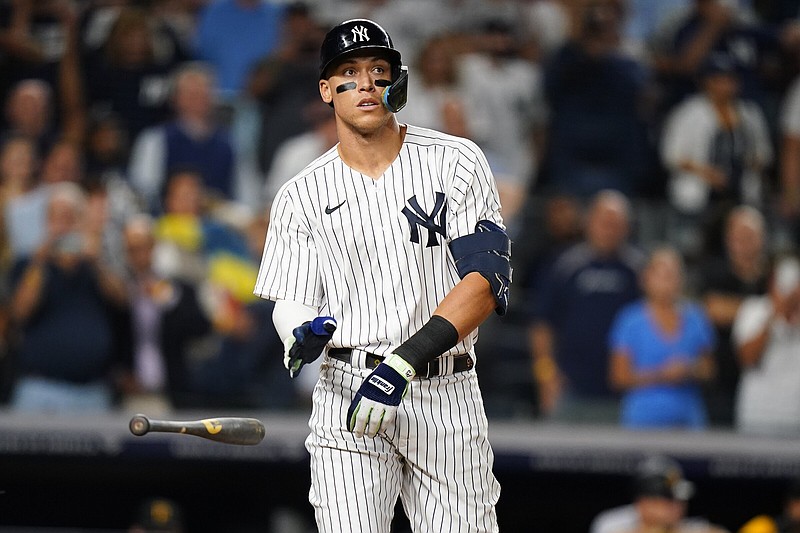 New York Yankees right fielder Aaron Judge reacts after being walked in the bottom of the eighth inning by Pittsburgh Pirates reliever Eric Stout on Wednesday night at Yankee Stadium in New York. Judge went 2 for 4, but remained at 60 home runs as the Yankees routed the Pirates 14-2. The Yankees host the Boston Red Sox for a four-game series beginning tonight. (AP/Frank Franklin II)

NEW YORK -- A sellout crowd of 46,175 groaned as Aaron Judge left the batter's box in the first and fifth innings.

"Fans packed it out to see us win a ballgame and see some homers," he said with a widening smile and a twinkle in his eyes, "so I think I got to cut out this double stuff, I guess."

A day after hitting home run No. 60 to spark a stunning five-run, ninth-inning rally capped by Giancarlo Stanton's game-ending slam, Judge lined a double to left on the first pitch to him from Roasny Contreras (5-5) and scored on Oswaldo Cabrera's grand slam.

Cabrera and Gleyber Torres had five RBI each. Torres homered twice in the eighth inning, one to right and one to left, raising his season total to 23.

With 14 games left, Judge leads the AL in average (.317), home runs and RBI (128) and is positioned to become the first Triple Crown winner in a decade.

Maris' sons and Judge's family were in the stands. Applause started whenever Judge walked onto the on-deck circle, and fans stood and snapped photos in anticipation during each trip to the plate.

"It felt like waiting for that big moment," Yankees Manager Aaron Boone said.

Judge hit a one-hop double over the wall in the left-field corner in the fifth and scored on Torres' single. He also struck out and grounded out, then got one more time at-bat as the eighth batter in eight-run eighth. A four-pitch walk by rookie Eric Stout -- all breaking pitches -- promoted boos.

"I'm not going to give in 2-0, 3-0 and throw him something, regardless who it is honestly, especially with a lefty on deck," Stout said.

New York (90-58) closed in on its sixth consecutive postseason berth and 24th in 28 years. The Yankees opened a 6 1/2 game-lead over second-place Toronto in the AL East and with one more win would clinch no worse than a wild card.

Cabrera made the Yankees the first team in major league history to end a game with a slam and hit another in the first inning of its next game, according to STATS. The only previous teams to hit slams in the last inning of a game and the first of the next were the 1955 Boston Red Sox and the 2017 Los Angeles Dodgers.

Cabrera has three home runs and 14 RBI in 30 games since his debut on Aug. 17. With the bases loaded on Judge's double and a pair of walks by Contreras, Cabrera drove a hanging slider into the right-field bleachers.

PHILLIES 4, BLUE JAYS 3 (10) Matt Vierling had five hits, including the game-winning RBI single in the 10th, to rally Philadelphia over Toronto. J.T. Realmuto homered for Philadelphia, which snapped a five-game losing streak to stay 2 1/2 games ahead of Milwaukee for the final NL wild-card spot. Vladimir Guerrero Jr. hit a three-run home run for the Blue Jays, who lead the AL wild-card standings.

BREWERS 6, METS 0 Pinch-hitter Mike Brosseau greeted Drew Smith with a grand slam in the pitcher's return from two months on the injured list, and New York squandered a chance to boost their NL East lead with a loss to Milwaukee. Willy Adames hit a go-ahead home run in the sixth against Taijuan Walker, his fifth home run in 10 games and 31st this season.

CUBS 4, MARLINS 3 Ian Happ hit a go-ahead sacrifice fly in the eighth inning and Chicago rallied to beat Miami. Patrick Wisdom hit his 23rd home run for the Cubs, who had only four hits. Down 3-1, the Cubs scored three in the eighth without a hit against Marlins relievers Steven Okert and Dylan Floro.

GIANTS 6, ROCKIES 1 Logan Webb (14-9) didn't allow a hit until one out in the sixth inning and was then immediately pulled by Manager Gabe Kapler after 66 pitches in San Francisco's victory over Colorado.

ATHLETICS 2, MARINERS 1 Luis Torrens homered for one of four hits by stumbling Seattle as they were shut down again by last-place Oakland.

GUARDIANS 8, WHITE SOX 2 Rookie Steven Kwan homered among his three hits and Triston McKenzie struck out 13 as Cleveland moved closer to its first AL Central title since 2018. Kwan had hits in each of his first three at-bats, capped by his fifth home run of the season on the first pitch of the fourth inning from Chicago's Lance Lynn (7-6) .

ORIOLES 8, TIGERS 1 Jordan Lyles threw the second complete game of his career, Kyle Stowers homered and drove in three runs, and Baltimore avoided its first-ever season sweep by Detroit. Rookie Gunnar Henderson and two hits and an RBI for the Orioles, who snapped a nine-game losing streak to Detroit dating to last season.

RANGERS 7, ANGELS 2 Rookie Josh Smith homered over the fence for the first time and Texas beat Los Angeles. Smith's only other round-tripper was inside the park at Globe Life Field against Oakland in July. Shohei Ohtani and Taylor Ward extended their hitting streaks to seven games. 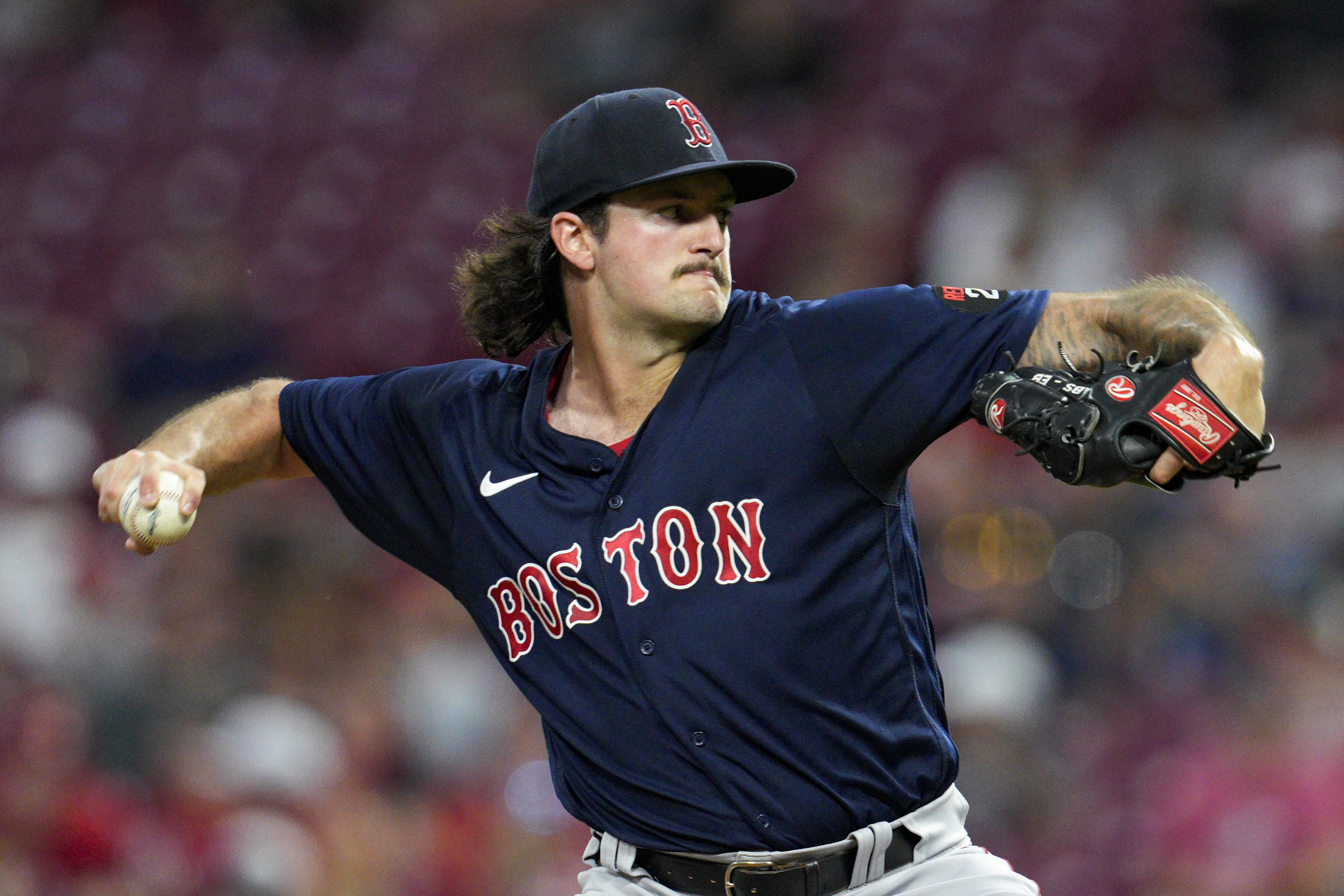 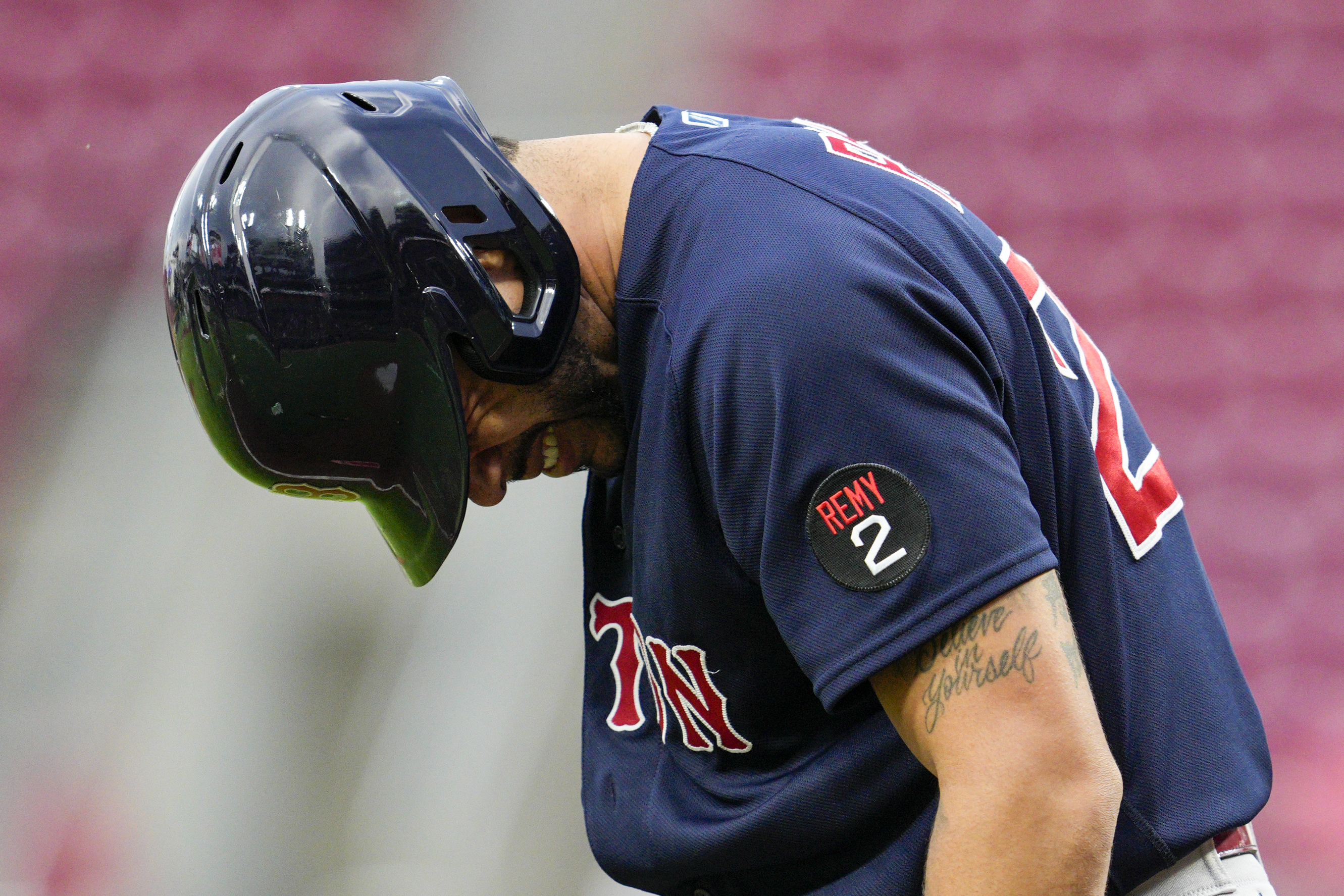 Boston Red Sox's Tommy Pham reacts after being hit by a pitch during the first inning of the team's baseball game against the Cincinnati Reds Wednesday, Sept. 21, 2022, in Cincinnati. (AP Photo/Jeff Dean) 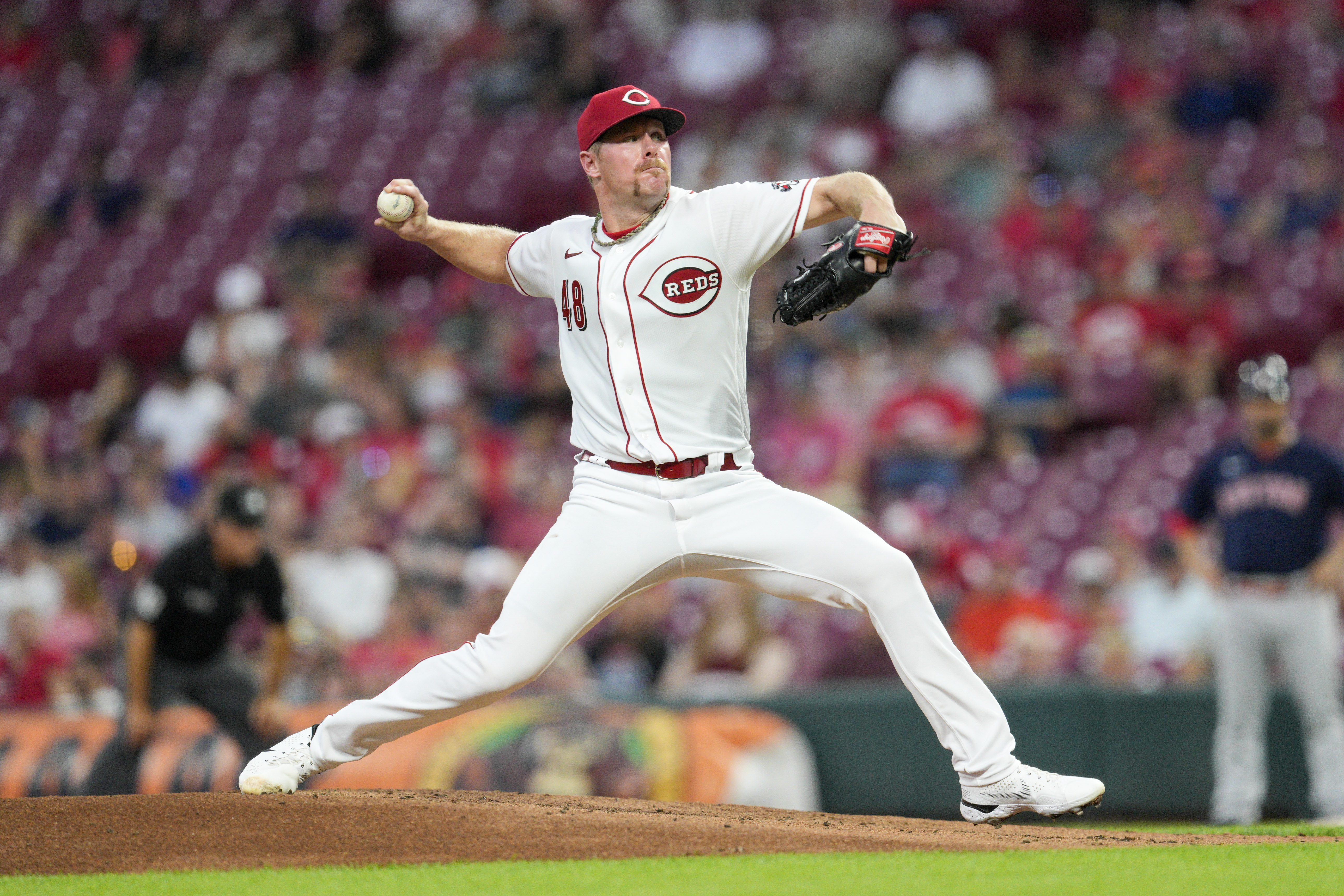 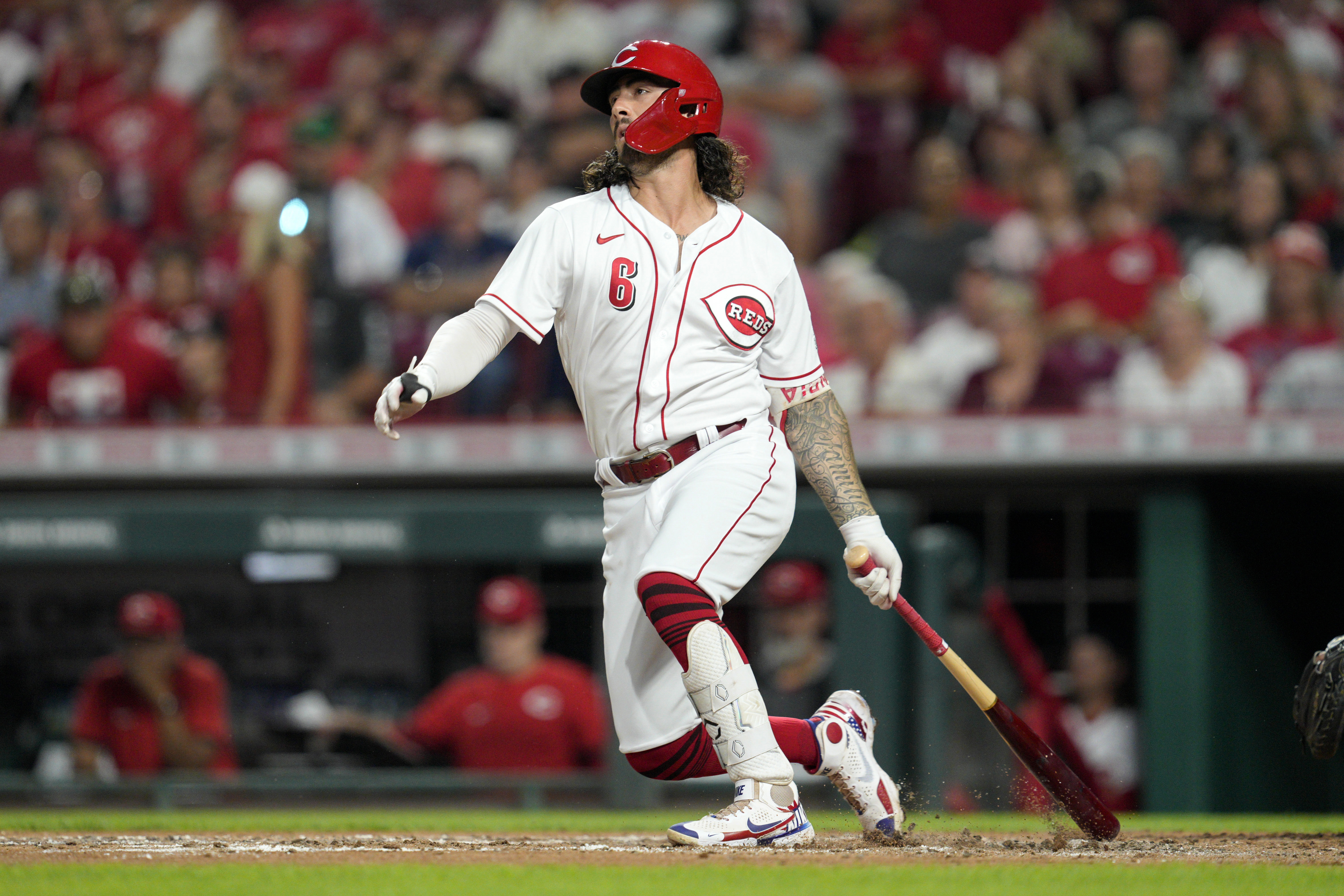