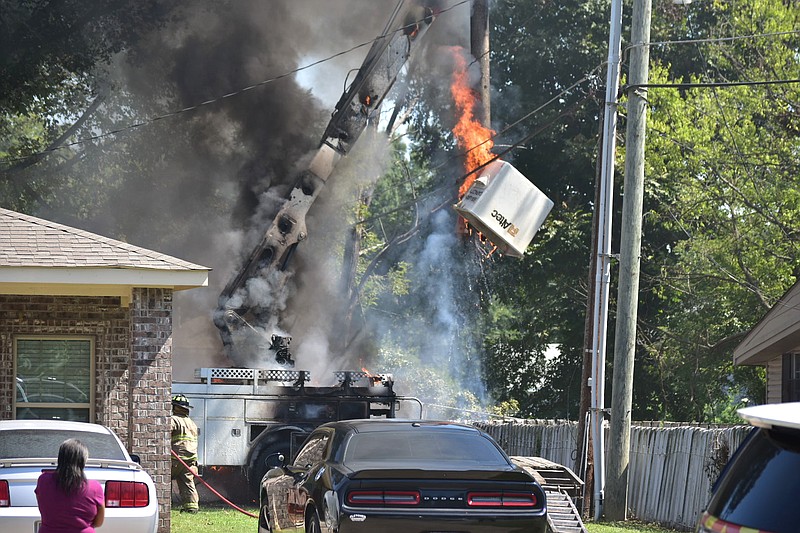 A woman watches as a bucket truck catches on fire near power lines behind a duplex in the 200 block of South Poplar Street in Pine Bluff on Wednesday. (Pine Bluff Commercial/I.C. Murrell)

A man was rescued from the bucket of a utility truck that caught fire near power lines behind a duplex south of Martha Mitchell Expressway on Wednesday afternoon.

A Pine Bluff fire truck responded to the scene at the 200 block of South Poplar Street at about 1:30 p.m. Wednesday. Firefighters appeared to contain the blaze within 30 minutes.

No injuries as a result of the fire were reported, but the accident caused a power failure three blocks wide along South Poplar that affected up to 50 Entergy customers as of 2:35 p.m., according to an interactive map from the power utility.

O'Brennan Moss, who lives in the area, said there was no explosion to the truck when it caught fire but noticed something was wrong when his power went off.

"I came to the window and I looked out and I saw smoke coming out of the bucket," Moss said. "I heard some talking, and they were like, 'We can't get it to move.' I started seeing fluid coming out of that long arm, and that fluid was on fire. Over time, the fire started accumulating."

The man who was rescued came down a rope, Moss said, but fire continued to blaze from the bucket near power lines behind the duplex. The lines did not appear structurally compromised.

The cause of the fire was still under investigation, Battalion Chief Ernest Stacy said while on the scene.

The origin of the truck was not indicated on the driver's side of the vehicle facing South Poplar. 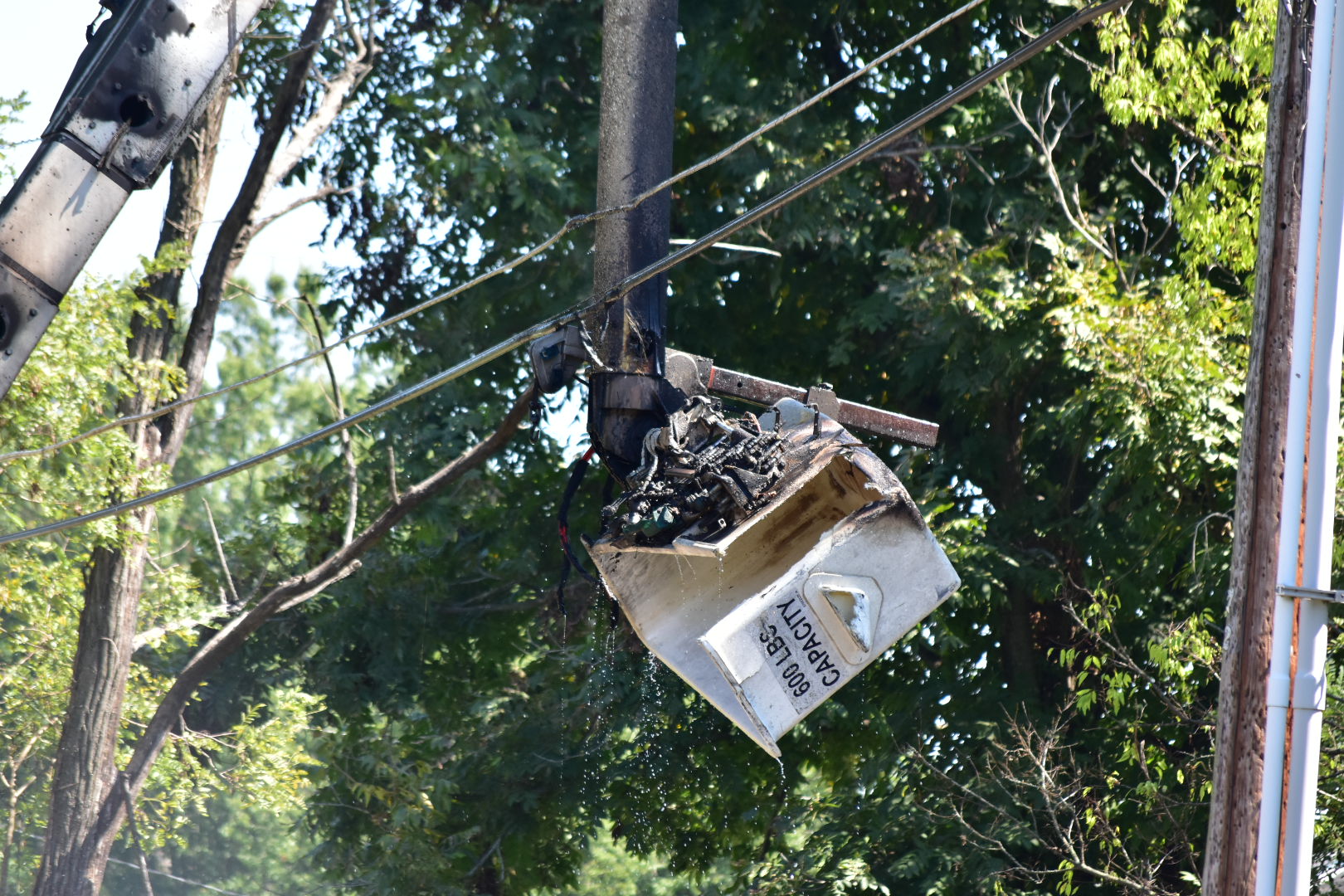 The bucket of a utility truck is charred after Pine Bluff firefighters contain the blaze that impacted the vehicle near power lines on South Poplar Street on Wednesday. (Pine Bluff Commercial/I.C. Murrell) 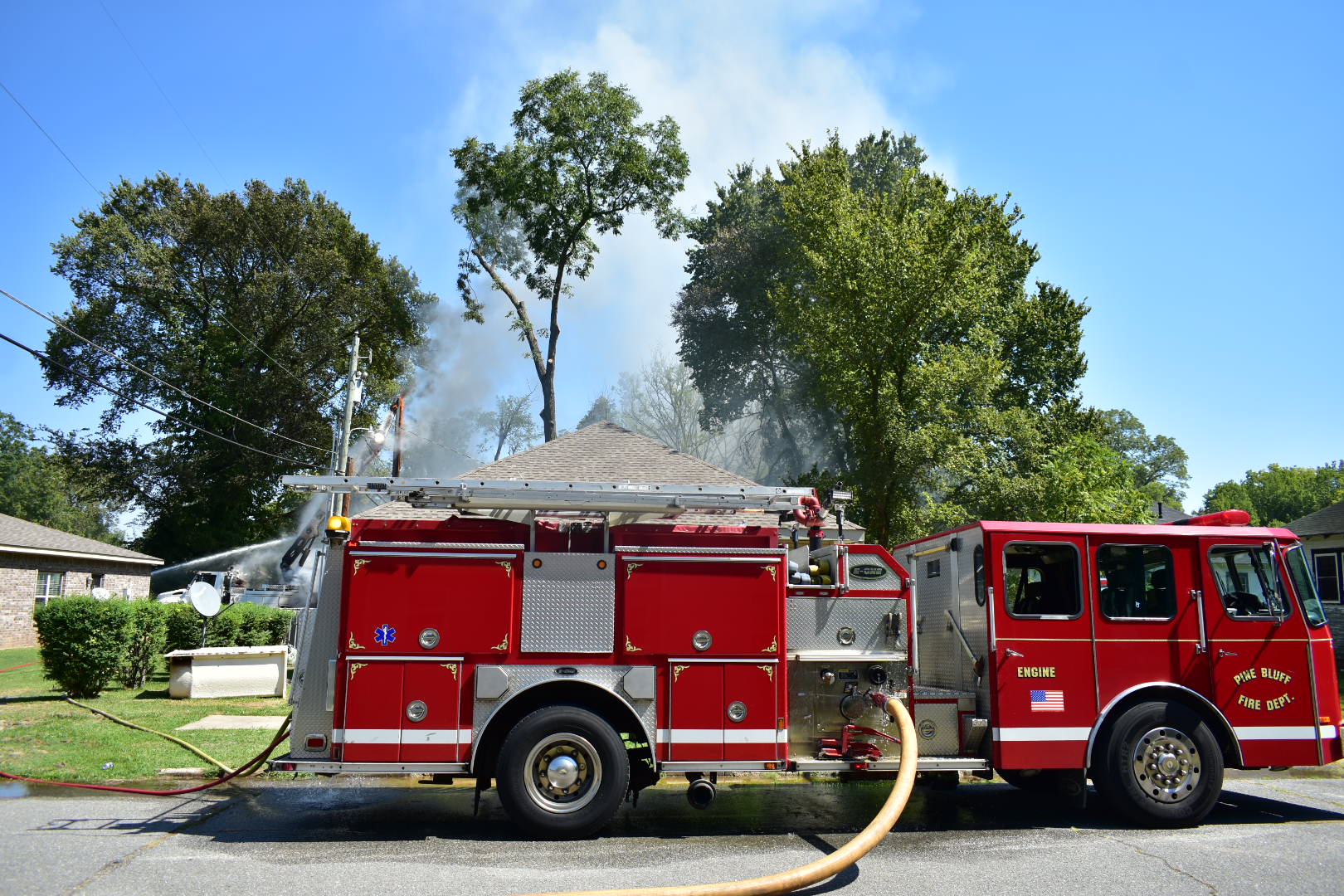 A Pine Bluff fire truck pumps water to a blaze impacting a utility truck, hidden behind the fire truck, on the 200 block of South Poplar Street on Wednesday. (Pine Bluff Commercial/I.C. Murrell)