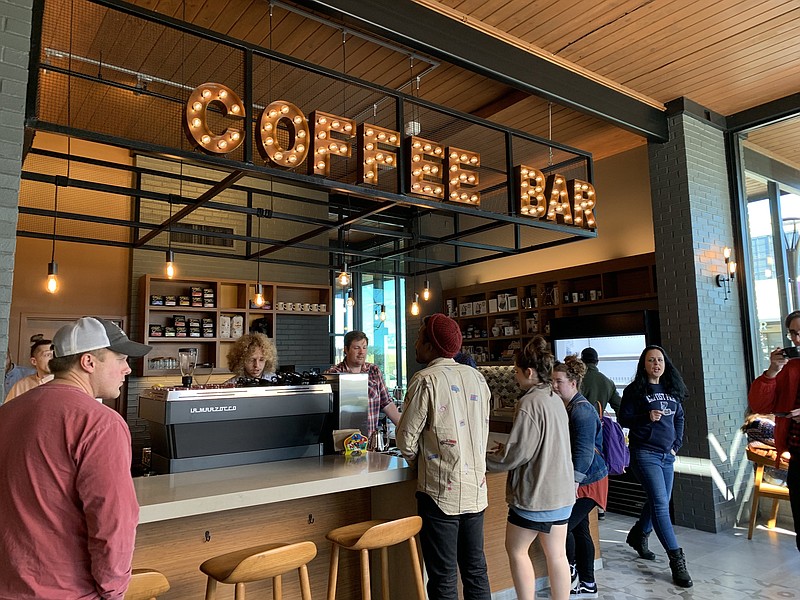 Fidel & Co’s original shop is at 500 Shall Ave., Little Rock; a second location is set to open this fall on President Clinton Avenue in the River Market. (Democrat-Gazette file photo/Eric E. Harrison)

Tasty African Restaurant has opened in the Westchase Shopping Center, 301 N. Shackleford Road, Little Rock, next to Aji Ramen Bar (with neighbors that include Star of India and Bobby’s Country Cookin’). The menu appears to be predominantly West African and includes a number of traditional African soups; various dishes made with Jollof rice, beans, plantains, tilapia, “sniper” fish (there is such a thing as a sniper fish, but we suspect it’s probably supposed to be “snapper”), goat and jerk chicken; there’s also a list of vegetarian options. Hours are 10:30 a.m.-8:30 p.m. Monday-Saturday; the phone number is (501) 291-0531, according to the front door and the Facebook page (facebook.com/tastyafricanrestaurant); (501) 838-7875 and (501) 952-8464 on the menu and the website (tastyafricandishes.org).

Lea Lea’s Gourmet Dogs has opened in its new home at 3408 S. University Ave., Little Rock, after moving from 215 Center St. Owner Cherreyl Alexander says hours are 11 a.m.-8 p.m. Tuesday-Thursday, 11 a.m.-11 p.m. Friday-Saturday; that the menu closely resembles the one she offered downtown; and that her alcholic beverage license came through so she can serve beer, wine and the establishment’s mixed-by-machine daiquiris. The new phone number is (501) 246-3008.

All in a Bowl, on the back side of 3000 Kavanaugh Blvd., in Little Rock’s Hillcrest, is now all the way open, primarily offering, as the name suggests, various dishes in a bowl — we’ve mentioned photos on the Facebook page (facebook.com/allinabowl) of a Chicken Avocado Bowl, and a “Simple Bowl in A Bowl!!! Avocado, chicken, almonds, pecans, cucumber, tomatoes, spinach.” A recent special: a bowl salad of hearts of palm, cucumber and tomatoes over mixed leafy greens. The chalkboard menu recently also listed some interesting-sounding salads, including honey crab and fish ceviche, and a range of sandwiches, including turkey with cheese, fresh mozzarella, salami and “Mini Pancakes with Nutella,” plus bagels and croissants. It’s also now serving wine and beer. Hours are 10 a.m.-2 p.m and 5-7 p.m. Monday-Friday, noon-7 p.m. Saturday, noon-6 p.m. Sunday. The phone number is (501) 500-3031.

Fidel Samour, namesake of Fidel & Co Coffee Roasters, 500 Shall Ave., in Little Rock’s East Village, says, “We’re still waiting for a few key pieces of construction to be completed. The aim is a late October/early November soft opening” for its second location, in partnership with Stoko, a pending co-working space at 610 President Clinton Ave., in the River Market District. The building that formerly housed Conway-based coffee shop Zeteo. Fidel & Co manager Eleanor Miller awhile back told us the setup will be basically the same as the original location with perhaps a slightly smaller menu. Hours are still to be determined. At Fidel & Co’s original location: (501) 712-6891, fidel.coffee, facebook.com/fidelandco.

Meanwhile, Samour reports construction is about 90% complete on his other East Village project, Sterling Market, a food-hall-style restaurant going into the former Cathead’s Diner space in the Paint Factory building, 515 Shall Ave., across the street from the coffee shop. The remaining 10% will probably take until “late fall/early winter.” Arkansas Business has reported that the establishment will have: a butcher shop, a greens/sandwich station, an artisan pizzeria and a bakery, plus a full bar (Samour has applied to the state Alcoholic Beverage Control Division for restaurant mixed drink maximum, retail beer off premises and native beer permits) and an area selling grab-and-go food.

Saturday was the last business day for Kris & Sam’s The Box Lunch and Cookie Shop, 1208 S. Bowman Road, Little Rock. Owner Vicki Mooney Adams posted Sept. 8 on the Facebook page (facebook.com/krisandsams) that the departure of two key staff members means there is no chance the shop will reopen at another location: “We’ve known this day was coming since last November. … Gail [Ruddock] had already decided to move back home to Louisiana and Kayla [Keaton] is ready to embark on her career. As many already know I’ve had the store 16 years. Gail has been with me 15 of those years and Kayla 8. I’m happy they are moving on to the next chapter of their lives. And I’ll be looking for something else to do as well. Moving to another location and incurring the costs of the move and potential debt I could likely face is very scary for me at this age and stage of life. Not to mention having hire new people. Far more negatives in moving.” 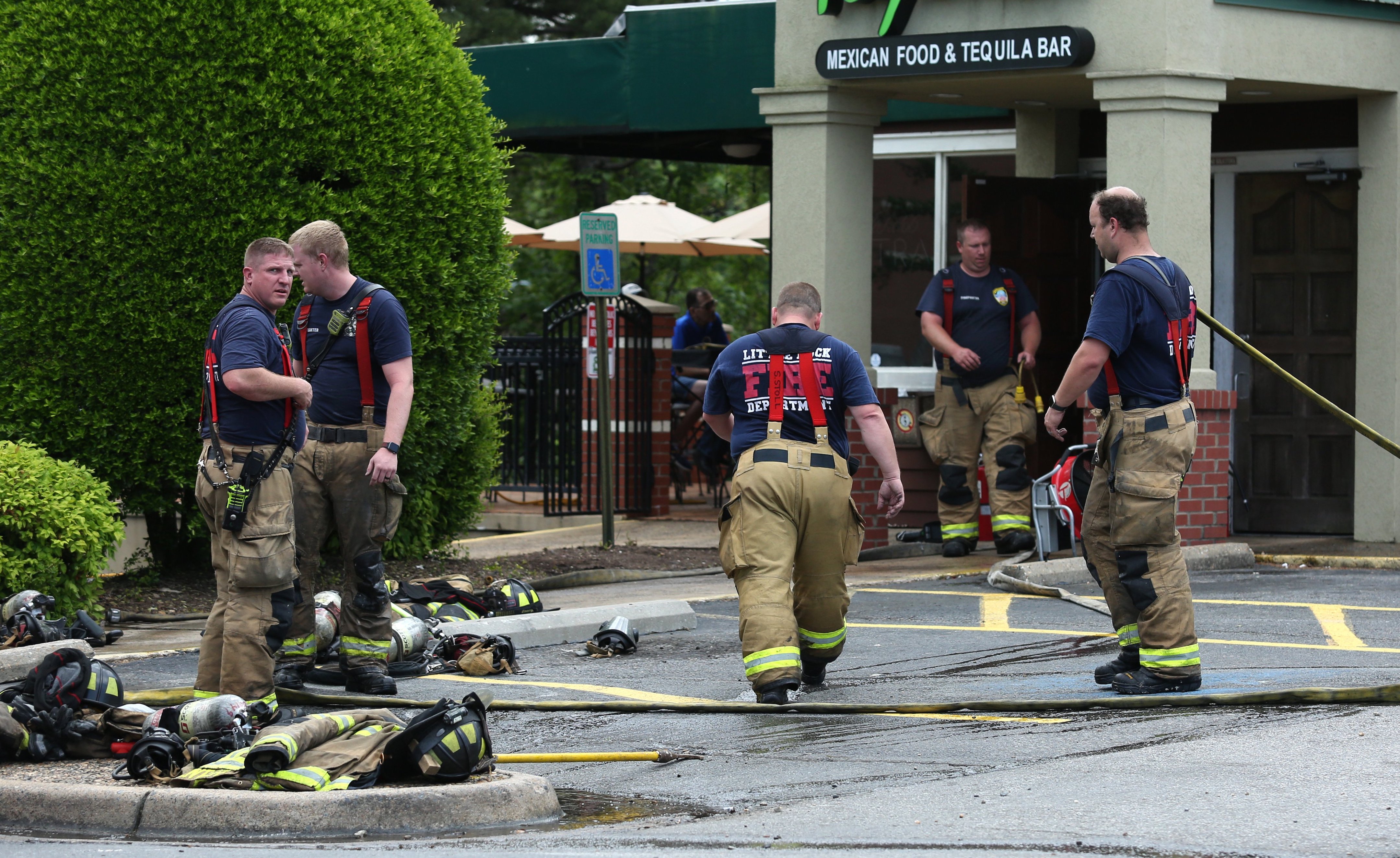 Little Rock firefighters battled a blaze in May at Senor Tequila on North Rodney Parham Road. The restaurant has yet to reopen and its eventual status is unclear. (Democrat-Gazette file photo/Colin Murphey)
We’ve been trying to get an update on the status of the Senor Tequila restaurant in the Colony West Shopping Center, 10330 N. Rodney Parham Road, Little Rock, which closed following a May 10 fire that caused smoke damage to the building. Calls to the restaurant’s phone number, (501) 224-5505, for months rang but produced no answer; a check returned a “no longer a working number” response.