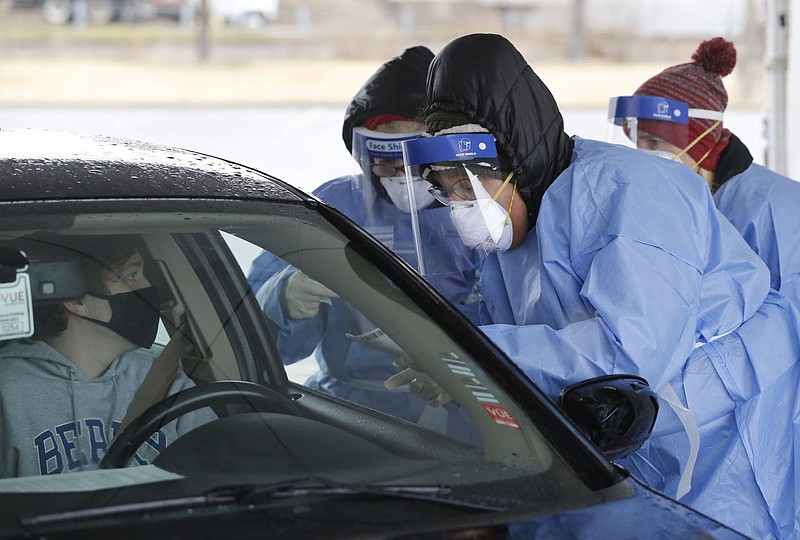 Medical personnel collect information from Trey Berry, a junior at the University of Arkansas, Fayetteville, in the parking lot across from Baum-Walker Stadium at the corner of Razorback Road and 15th Street in Fayetteville in this Jan. 6, 2021, file photo. Berry was about to get a covid-19 test during a drive-up coronavirus testing clinic hosted by the Arkansas Department of Health. (NWA Democrat-Gazette/David Gottschalk)

The average number of new daily covid-19 cases in Arkansas fell to its lowest level in more than three months on Thursday.

However, the Arkansas Department of Health on Thursday reported 18 additional coronavirus deaths. It was the fourth-largest one-day jump in the state's covid death count in six months, but it follows two days in which most of the reported covid deaths were actually from weeks or months earlier.

The state's death toll from the virus, as tracked by the state Health Department, now stands at 12,046.

The number of hospitalized covid patients, which fell by seven on Wednesday, fell Thursday by three, to 286. However, Thursday's count was still higher by nine than its level a week earlier, and higher by 28 than the two-month low total number of hospitalizations that the state Health Department reported early last week.

The state's total count of coronavirus cases rose Thursday by 775. While larger by 19 than the increase in Wednesday, it was down by 70 compared to the rise the previous Thursday.

The average daily increase in the state's covid-19 case count over a rolling seven-day period fell Thursday to 565, its lowest level since the week ending June 7. It was the ninth consecutive daily decline in the seven-day average.

With recoveries outpacing new coronavirus cases, the number of cases in the state that were considered active fell by 274, to 7,348, the smallest number since June 14.

The number on ventilators, which had risen the previous four days, fell by three, to 19.

Since the pandemic reached Arkansas in March 2020, the state Health Department has reported 948,742 cases of the coronavirus. Of those, 929,100 are considered recovered.