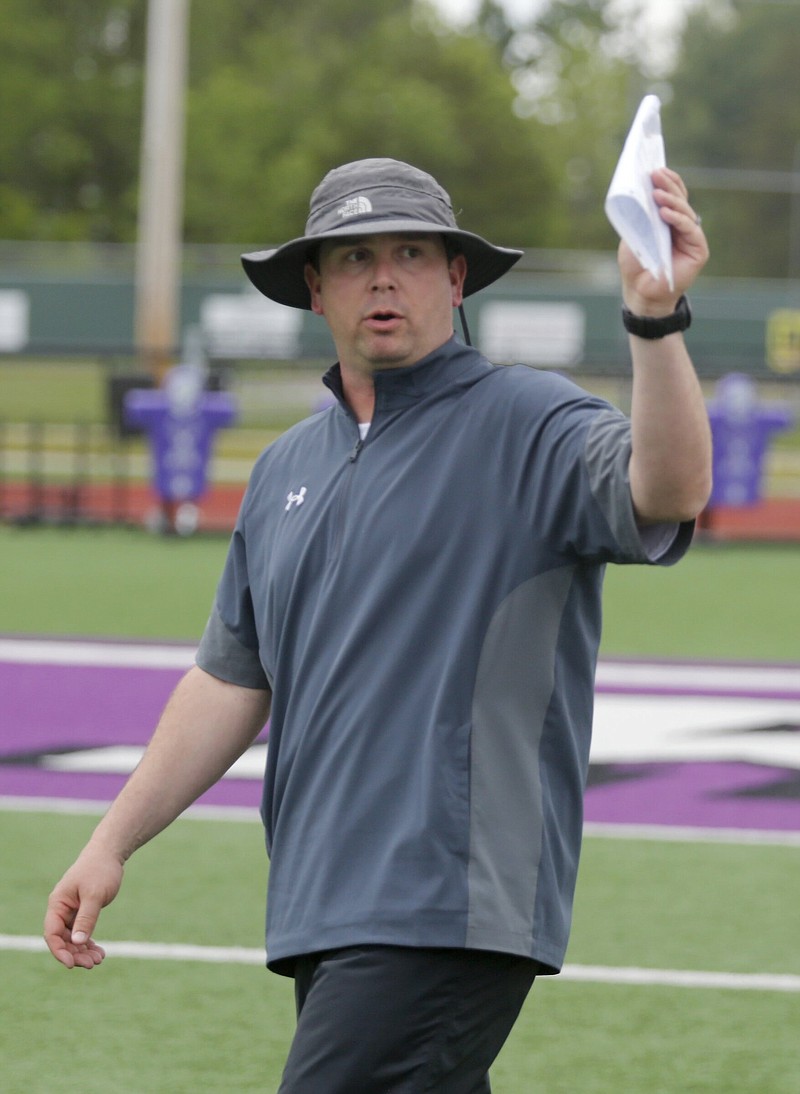 Elkins Coach Zach Watson said he “was happy to see some toughness from our team” even as it lost to Charleston last week. The Elks (2-1) enter 4A-1 Conference play this week with a home game against Gravette. (NWA Democrat-Gazette/David Gottschalk)

Harrison Coach Chris Keylon's message to his team since its last game is simply "focus and finish" as the Goblins begin 5A-West Conference play with a home game Friday against Farmington.

Harrison (2-1) returns to action after closing out nonconference play on Sept. 9 with a 25-24 overtime loss against Batesville in a game where the Goblins owned a 17-6 lead and didn't maintain it. The Pioneers later tied the game at 17, then won the game on a two-point conversion after a touchdown.

"We're upset about that loss," Keylon said. "We didn't show up mentally, and we were not ready to play. That's the first time we've done that all year. I think our players learned a lesson from it, and they won't let it happen again.

"Our focus this week has been not finishing, and we've spent a lot of time on it. We have a game plan for Farmington, and I think it's a good game plan. But we have been focused on us and being able to finish because Farmington isn't going to quit, no matter what the score is."

If the Goblins need another reminder, all they have to do is review last year's game against the Cardinals (2-1). Harrison had a 35-10 lead at one point, only to see Farmington score 26 straight points and claim a 36-35 victory, ending the Goblins' long win streak in conference play.

Keylon wasn't there to witness what happened, but he's made sure to give his team a reminder about it.

"We thought we had the game won at halftime," Keylon said. "But the thing I keep telling them about it to remember that Farmington is not going to give up. They will stay it and try to find a way to come back and win the game. They are that type of team. That's another reminder of what happens when we don't finish."

Elkins coach Zach Watson said the reason behind his team's nonconference schedule was to see how the Elks could perform against some tough, run-based offenses.

Elkins came away with wins over Pottsville and Clarksville and suffered a loss to Charleston, but Watson believes that will be beneficial as the Elks enter 4A-1 Conference play this week with a home game against Gravette.

"I was happy to see some toughness from our team," Watson said. "Charleston may have the best quarterback we'll see all year, and we had a little hiccup against Charleston. Other than that, I'm proud of our guys. We played some hard, tough football."

Watson said he has had plenty of contributors on both sides of the ball through the first three games, but Ja'Quae Waldon is one who has caught his eye in the early stages. Walden, a sophomore who serves as the Elks' backup tailback and outside linebacker, drew a start against Clarksville and was asked to take on the Panthers' pulling guards.

"Here he is at 165 pounds, and he's taking on guys around 210 or so," Watson said. "But he's out there playing with reckless abandon, and he just blew them up. And every time we've had him run the ball, he's out there running hard and not turning it over."

Watson said several young players have been impressive so far during the three nonconference games, and he likes what he has seen out of receiver Stone Dean, who splits his time between H-back and receiver and is the twin brother of Elks quarterback Dizzy Dean.

"He's one of the guys who's out there blocking on the edges in our running game," Watson said. "He's also been the one who has come up with some big third-down catches as well."

Lincoln returns to conference play as a Class 4A school for the first time in two years Friday night as the Wolves host Green Forest in a 4A-1 Conference showdown.

The approach to this conference game won't be any different than it's been when Lincoln (2-1) prepared for teams in the 3A-1 Conference the past two years, according to Lincoln coach Reed Mendoza.

"We're still going to have a lot of players going both ways," Mendoza said. "There are some areas where we will platoon some players. If anything, that are a couple of players that we want to refrain from having to play both sides, and there are some weeks when we'll turn them loose and let them play both ways. There also might be a slight tweak here and there."

Several players have caught Mendoza's eyes through nonconference play. Sophomore tailback Kale Jones continues to impress and do things he did last year, and quarterback Drew Moore "has taken a huge step forward" in running Lincoln's offense and taking care of the ball with close to 1,000 yards and 10 touchdowns passing.

Jace Birkes has about 400 yards and 5 TDs receiving, while Kellar Price has been steady on both sides of the field. Price had 12 1/2 tackles and added nine receptions for 78 yards in Lincoln's game against Mena.

"What the kids have done this year might have surprised others, but it hasn't surprised me," Mendoza said. "Last year, we were so young and didn't have a lot of players with Friday night experience, but the maturity they gained from last year has really helped.

"From the start of our first game this year, we were really comfortable in what we were trying to do and executed our plan very well."

A familiar opponent gets to be the one to welcome Prairie Grove into 5A-West Conference play Friday night when the Tigers travel to Pea Ridge.

The two teams have played on a regular basis since 2004 when they became conference rivals. The two teams have also continued playing over the past two years when Pea Ridge left the 4A-1 for the 5A-West, and Prairie Grove (2-1) currently owns an 11-5 series advantage.

"It helps to play somebody like that," Prairie Grove coach Danny Abshier said. "You're familiar with their coach and what they have done in the past. I've never played a game on Harrison's field or on Alma's field.

"Huntsville's been there before, and I was able to talk to them and learn of a few things that have happened to them."

Prairie Grove closed out its nonconference scheduled last week with a 41-21 loss to what Abshier called a "very athletic" Tulsa Metro Christian team, despite Connor Hubbs' 87-yard kickoff return for a touchdown to start the game.

"The biggest lesson I've learned about our team is about the offensive line," Abshier said. "We have great flexibility in the line, but they want to do more than their assignments.

"After they get their block, they want to go and get another block. But if the first person gets up, it hurts what we're trying to do. But I've learned they want to be successful. We're down after that loss, but we're not out."

Abshier said that wingback/linebacker Joe Sims suffered an injury against Metro Christian and will miss Friday's game. Asher Linn, Hubbs and Justin Bryars will split the duties in Sims' absence.