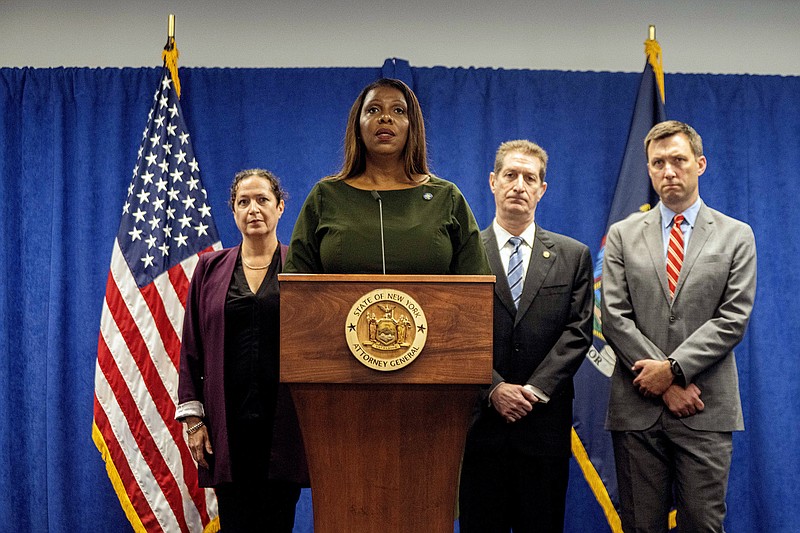 New York Attorney General Letitia James said Wednesday that her office’s investigation found that former President Donald Trump “engaged in years of illegal conduct to inflate his net worth, to deceive banks and the people of the great state of New York.” (The New York Times/Hiroko Masuike)

Donald Trump, his family business and three of his children lied to lenders and insurers for more than a decade, according to New York Attorney General Letitia James, who accused him of fraudulently overvaluing his assets by billions of dollars in a sprawling scheme. She is seeking to bar the Trumps from ever running a business in the state again.

James concluded in a sweeping lawsuit filed Wednesday that Trump and his family business violated several state criminal laws and "plausibly" broke federal criminal laws as well. Her office, which in this case lacks authority to file criminal charges, referred the findings to federal prosecutors in New York City's Manhattan borough. It was not immediately clear whether the U.S. attorney would investigate.

James dubbed it: "The art of the steal."

The 222-page lawsuit, filed in New York State Supreme Court, lays out in new detail how, according to James, Trump's annual financial statements were a compendium of lies. The statements, yearly records that include the company's estimated value of his holdings and debts, wildly inflated the worth of nearly every one of his marquee properties -- from Mar-a-Lago in Florida to Trump Tower and 40 Wall Street in Manhattan, according to the lawsuit.

The company also routinely spurned the assessments of outside experts: After a bank ordered an appraisal that found 40 Wall Street was worth $200 million, the Trumps promptly valued it at well over twice that number. Overall, the lawsuit said that 11 of Trump's annual financial statements included more than 200 false and misleading asset valuations.

"The number of grossly inflated asset values is staggering, affecting most if not all of the real estate holdings in any given year," according to the lawsuit. James, a Democrat who is running for reelection, filed the lawsuit, which comes just weeks after the former president refused to answer hundreds of questions under oath in an interview with James' office.

"This investigation revealed that Donald Trump engaged in years of illegal conduct to inflate his net worth, to deceive banks and the people of the great state of New York," James said at a news conference.

"Claiming you have money that you do not have does not amount to the art of the deal. It's the art of the steal," she said, referring to the title of Trump's 1987 memoir, "The Art of the Deal."

Trump, in a post to his Truth Social platform, decried the lawsuit as "Another Witch Hunt" and denounced James as "a fraud who campaigned on a 'get Trump' platform."

Trump's lawyer, Alina Habba, said the allegations are "meritless" and that the lawsuit "is neither focused on the facts nor the law -- rather, it is solely focused on advancing the attorney general's political agenda."

Trump has long used his net worth to construct a public persona as a self-made billionaire, an image that underpinned his initial run for the White House. But, according to James, he had a financial motivation for inflating his property values.

His company, the Trump Organization, provided the fraudulent financial statements to lenders and insurers, her suit said, "to obtain beneficial financial terms," including lower interest rates and lower premiums. All told, James said, he was able to obtain a quarter of a billion dollars in ill-gotten gains, money that she now wants the company to forfeit.

In a statement, the Trump Organization noted that the company's lenders "profited handsomely -- to the tune of hundreds of millions of dollars in interest and fees" from their dealings with the company. The statement also attributed James' action to "politics, pure and simple," arguing that she "put her own political ambitions ahead of the safety of New Yorkers," calling it "an abhorrent abuse of power, waste of valuable resources and tens of millions of taxpayer dollars."

Habba called the lawsuit "an abuse of authority" and said "we look forward to defending our client against each and every one of the attorney general's meritless claims."

Alan S. Futerfas, a lawyer for Ivanka Trump and Donald Trump Jr., did not immediately comment. But on Twitter, Donald Trump Jr. wrote that James was "weaponizing her office to go after her political opponents!"

James' lawsuit asks a judge to appoint an independent monitor to oversee the company's financial practices, while ousting the Trumps from the leadership of their own family business. James is also seeking to prevent the family from acquiring real estate in New York for five years in the event the company reinvents itself in Florida or elsewhere.

If she is successful, Trump and his children who are named as defendants -- Eric, Ivanka and Donald Trump Jr. -- will also be permanently barred from serving as officers or directors in any New York company, essentially chasing them out of the state. While James stopped short of trying to dissolve the Trump Organization altogether, she wants to shut down at least some of his New York operations.

Yet her case against him could be difficult to prove. Property valuations are often subjective, and the financial statements include a disclaimer stating that they have not been audited. And if there were a trial, his lawyers would most likely emphasize that Deutsche Bank and Trump's other lenders were hardly victims; all of his loans are either current or were paid off, some early.

Trump also famously does not use email, so any instructions he might have given his employees about the company's financial statements might not be in writing. The lack of a damning email -- or a witness inside his company willing to testify against him -- might complicate her effort to show that he intentionally used his financial statements to defraud lenders and insurers.

While James' lawsuit is being pursued in civil court, Manhattan District Attorney Alvin Bragg has been working with James' office on a parallel criminal investigation.

Trump cited fear of prosecution in August when he refused to answer questions in a deposition with James, invoking his Fifth Amendment protection against self-incrimination more than 400 times.

The odds of a criminal prosecution have been seen as falling in recent months after Bragg allowed a grand jury to disband without bringing charges. Bragg said again Wednesday, though, that the criminal investigation was "active and ongoing."

A criminal prosecution would have a far higher burden of proof than a civil lawsuit. And in a criminal case, prosecutors would have to prove that Trump intended to break the law, something not necessarily required in a civil case.

"Generally in criminal cases you have to prove intent. In civil cases, just negligence or intentional misrepresentation give rise to liability," said Neama Rahmani, a former federal prosecutor in San Diego who now practices law at a Los Angeles firm.

While Trump has often leveraged law enforcement scrutiny to portray himself as a political underdog and to raise money from his supporters, James' lawsuit challenges this image. Its detailed dissection of Trump's financial statements suggests that the success he has attributed to financial savvy and business acumen are instead the product of fraud and chicanery.

There was the Westchester County golf club that was valued as if it had charged hefty initiation fees that were never actually collected, the "cash" that Trump counted as his own even though it belonged to one of his partners in a commercial real estate venture, and the pretense that his Mar-a-Lago club and home and his golf course in Scotland could make money from lucrative residential development, even though Trump and his family business had entered agreements limiting their ability to do so.

In another example cited in the case, the Trump Organization starkly overvalued a group of rent-stabilized apartments in its building on Park Avenue in Manhattan that Donald Trump Jr. once described as being "the bane" of his existence. Instead of acknowledging that the value of some apartments was capped in the building, Trump Park, the company listed the overall residential units as worth $292 million, multiplying by six the figure that appraisers had assigned to the building's residential units and storage spaces.

Trump has cast each inquiry as part of a never-ending "witch hunt" and denied all wrongdoing. It is unclear whether he will be criminally charged as a result of any of them.

Early this year, James outlined the contours of her case in court papers, and disclosed in one filing that Trump's longtime accounting firm cut ties with the former president and essentially retracted a decade's worth of his financial statements. The firm, Mazars USA, compiled the financial statements based on information from Trump and his company, which "engaged in conduct intended to mislead Mazars in connection with its work compiling the statements, including by concealing important information," the lawsuit contends.

Trump's lead accountant testified under oath in a deposition that he was "shocked by the size of the discrepancy" between the value for the rent stabilized units at Trump Park listed in a 2010 outside appraisal and the value the Trump Organization assigned to the units. He also testified that he would not have issued the statements with the asset values the company provided for the building if he had been told about the 2010 appraisal, as well as one in 2020, or the fact that several units were rent stabilized.

In some years, Trump's financial statements contained clear contradictions, according to the lawsuit. His golf clubs, for example, derived some of their value from Trump's "brand premium" -- despite the annual statement "expressly advising" that the worth of his brand was not included in the figures.

In fighting the case, Trump's lawyers will likely point out the disclaimer in his financial statements saying that Mazars had not audited the valuations. They also would likely argue that the Trump Organization submitted the statements to sophisticated financial institutions that conducted their own due diligence and profited in their dealings with Trump.

Anticipating this defense, the lawsuit contends that Trump's valuations "cannot be brushed aside or excused as merely the result of exaggeration or good faith estimation about which reasonable real estate professionals may differ." Instead, the lawsuit argued, the Trumps used "objectively false assumptions and blatantly improper methodologies with the intent and purpose of falsely and fraudulently inflating Mr. Trump's net worth."

Trump's previous refusal to answer questions in testimony could be held against him if a lawsuit ever reaches a jury. In civil cases, courts are allowed to draw negative inference from such Fifth Amendment pleadings.

"If Trump wanted to argue that some accounting decision was harmless instead of malicious, he might have already passed up the opportunity when he decided to stay silent," said Will Thomas, an assistant professor of business law at the University of Michigan.

In a previous clash, James oversaw the closure of Trump's charity with contentions that it misused its assets to resolve business disputes and boost his run for the White House. A judge ordered Trump to pay $2 million to an array of charities to settle the matter.

James, who campaigned for office as a Trump critic and watchdog, started scrutinizing his business practices in March 2019 after his former personal lawyer Michael Cohen testified to Congress that Trump exaggerated his wealth on financial statements provided to Deutsche Bank while trying to obtain financing to buy the NFL's Buffalo Bills.