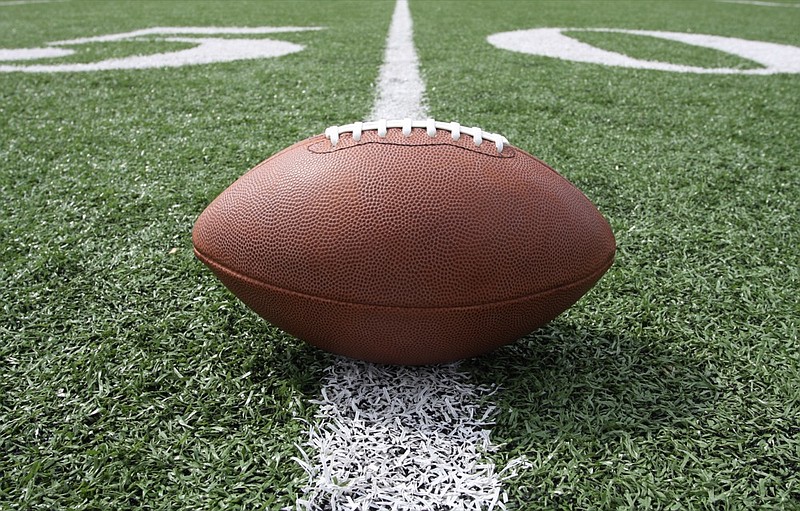 "I think so," Lavaca Coach Mark Headley said. "We've been blessed with some speed this year, and on turf, they looked pretty fast."

Lavaca christened its new artificial turf field with a 404-yard offensive performance in a 43-13 win over Mount Ida.

"It was a huge night, a historical night, with a huge crowd here," Headley said. "Our kids came out and played, and that was the most important thing."

Maddox Noel threw for 125 yards and a touchdown pass to Jimmy Barron for the game's first touchdown and ran for 129 yards and touchdowns of 7, 1 and 43 yards so the senior quarterback definitely enjoyed the opening night on the turf.

Noel also said he even felt a little faster.

Senior running back Dakota Hartsfield added 98 yards on the ground and a 36-yard touchdown run that had Lavaca up, 20-0, at the half.

"It definitely felt better than the old field," Hartsfield said. "It's nice to play on a field that's not bumpy with potholes in it. You definitely get a little bit of a bounce on it, so I did feel a little faster."

Lavaca (3-0) imposed the Arkansas Activities Association's Sportsmanship Rule on two touchdown runs by Noel in the third quarter that pushed the lead to 36-0.

Lavaca's defense also played fast on Friday, limiting Mount Ida, under the return of veteran Coach Mike White, to just 182 yards on the ground on 33 attempts and no passing yards.

"Coach White has won two state championships there and we've played each other a long time," Headley said. "I knew one of the keys was going to be matching their physicality. Every year, they're in a split-back veer and they're coming right at you. Our guys played lights out. I was super proud of our defense. They set the tone as far as being physical."

This week the Arrows tangle with Cedarville, where the Pirates have won the last three meetings. Like Mount Ida, Cedarville features a run-heavy physical running attack.

"They're going to Wing-T it and come right at you," Headley said. "It's going to be very important on the defensive side of the ball to play downhill and physical."

Senior Eli Smithson led Lavaca's defense that shut down Mount Ida's run game with 10 tackles, including four solos. Fischer Martin was in on six tackles and had a tackle for loss. Michael Barwick and Spencer Giles were each in on five tackles.

Lavaca was 6-for-8 on third downs and converted 1-of-2 fourth-down tries. The Golden Arrows will need the same type of efficiency to end the three-year losing streak to Cedarville.

After Friday, Lavaca will play four of its six 3A-1 Conference games at home but close with heavyweights Booneville and Charleston.

"It's a super conference," Headley said. "You look at everybody's record and what they did in nonconference, and now we're going start playing each other. It's going to be one of the most competitive 3A leagues in the state."

The Bulldogs may have played the most perfect quarter in their history on Friday night in a 61-7 win at Siloam Springs.

Greenwood scored on five possessions in the first quarter with 21 offensive plays for 261 yards.

"It was nuts," Greenwood coach Chris Young said. "It was the perfect storm. We were efficient on offense and were able to take advantage of some shots."

Senior quarterback Hunter Houston was 13-of-16 passing for 166 yards and four touchdown passes in the first 10 minutes, including the first two to Grant Karnes of 32 yards on Greenwood's fourth play and 5 yards on Greenwood's seventh play for a 13-0 lead with 7:35 left. Houston then hit L.J. Robins on an 11-yard touchdown pass to cap a seven-play for a 20-0 lead with 5:12 left and Peyton Presson with a 26-yard scoring pass for a 27-0 lead with 2:21 left in the quarter.

"It all starts with our quarterback," Young said. "I wouldn't trade him for anybody. He can make all the throws, and he's showing that. He's been consistent. He's been incredibly accurate."

Houston also has the arm strength, almost knocking Presson down with a dart in the first quarter.

"We were messing with Presson in here when we were watching film," Young said. "Presson is claiming the ball got tipped, and that's what threw him off. He saw that missile coming at him and was trying to get out of the way."

Greenwood will also welcome the return of former coach Ronnie Peacock to Smith-Robinson Stadium on Friday for a players' reunion. An area will be set up on the track for former players to visit with Peacock, beginning at 6 p.m.

The Airedales won three nonconference games in impressive fashion but still had plenty to work on during their open week before starting 5A-West play.

"We sat down as a staff and took those three weeks," Alma coach Rusty Bush said. "At the top of the list, we were 3-0. That's the most important thing. Then as we progressed through all three games, what did, what we did that was good and what do we need to work on from here."

Alma's defense was very stingy in wins over Van Buren, Siloam Springs and Pryor, Okla., especially against the run, allowing just 81 yards per game on the ground.

That will be severely challenged on Friday when the Airedales open 5A-West play against Clarksville's run-oriented ground attack.

"We're getting ready for the Single-Wing," Bush said. "There's a lot of difficulty there. You try to stay as normal defensively as you possibly can but you also have to do some things a little bit differently than you're used because of the unorthodox offense that you're facing."

Alma is trying for its first 4-0 start since 2004 when the Airedales recorded an undefeated regular season.

Paris was enjoying the open week after playing in the first three weeks of the season when the Eagles discovered they would also get another open week later this season.

Danville, a 3A-4 foe, canceled the remainder of its season last week due to low numbers.

Paris was scheduled to travel to Danville on the final Friday night of the season, and will not try to schedule a nonconference opponent.

"It's disappointing to lose a game and find out you're a game short in the middle of the season," Paris coach Jeff Weaver said. "We're not actively searching for another game that week. If we make it to the playoffs, we'll treat it as a bye week and heal up for the playoffs."

"Our situation, we played a pretty tough nonconference schedule," Weaver said. "We're really inexperienced. I feel like we're getting better."

Paris lost to Waldron, Mansfield and West Fork in consecutive weeks before the open week. Those three teams are a combined 8-2.

Also, the players on the team are dealing with the loss of a former player. George Poole, a quarterback on the 2018 team, was found shot to death at the Paris Sonic on Monday where he worked.

"They knew George, and one of our seniors works at Sonic," Weaver said. "They would have been in early junior high when George was a senior. A couple of the coaches coached him, so they're upset as well."

Paris hosts Glen Rose on Friday to open 3A-4 play before traveling to Bismarck the next week.

Junior lineman Mathew Crosby knew the quality of opponent on Friday night in Harding Academy would suit the Bearcats well down the road.

"After playing these guys, we're prepared for everybody that we're going to face," Crosby said. "Overall, we have to be better."

"We for sure have to learn how to hold on to the ball in tough situations like that," Crosby said. "We've got to get better conditioning as well."

Booneville still managed to rack up 267 yards on 46 carries but had trouble slowing down Harding Academy and lost, 44-14.

Booneville travels to Hackett in the 3A-1 opener on Friday.