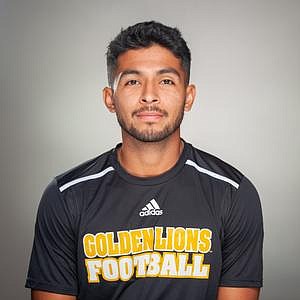 A year ago Cristofer Thompson was an Alcorn State University Brave.

Thompson converted 3 of 4 extra points as the Braves stormed from two 19-point deficits on the road to shock the University of Arkansas at Pine Bluff 39-38 in front of a national-TV audience. It was the last of four games in 2021 in which he played.

"I was just sitting the bench and I felt like I could be playing somewhere," Thompson said, adding he was not injured.

Thompson then put his name in the NCAA transfer portal and received a call from UAPB in August. He traded in Alcorn purple and gold for Pine Bluff black and gold and will voyage with the Golden Lions back to Lorman, Miss., some 40 miles north of his home in Natchez, to begin Southwestern Athletic Conference play Saturday.

"I thought I could play somewhere, and I just wasn't getting those reps at Alcorn," Thompson said. "That's when I decided to enter the portal."

He was an all-state punter and kicker at Adams County Christian School, according to his Alcorn bio, and started his college career at Mississippi's Jones College. As a freshman, he was the third-leading scorer in the NJCAA after making 11 of 15 field goals and 78 of 81 extra points. He helped Jones reach a postseason bowl and was named that game's MVP.

Alcorn did not play the spring 2021 season the SWAC organized to make up for the fall 2020 season lost to the covid-19 pandemic. The following fall, Thompson went only for 2 for 5 on field goals but was 9 for 10 on points-after-touchdowns.

Three games into 2022, Thompson is already 3 for 5 from the field with a long of 37 yards and 13 for 13 on PATs. Last Saturday he had a field goal from 39 yards out blocked that was scooped up and taken back the other way for an Oklahoma State University touchdown, but he made his only PAT try in a 63-7 loss.

He won the job after a fierce preseason camp battle with All-SWAC punter Josh Sanchez and true freshman Trey Glymph, one that went right down to the week of the season opener against Lane College.

"Just like any other position, it's competition," Thompson said. "I'm here to compete. The guy for the job will get the job done. Every day was a battle. Coach is going to play who he thinks is fit for it, but at the end of the day, it's competition."

Glymph, of Alpharetta, Ga., has gotten into the scoring column as well. He made his only field goal attempt from 27 yards out and was 3 for 3 on PATs against North American University on Sept. 3.

"I was excited," Glymph said. "Obviously everybody wants to play but Coach Gamble told me he has confidence in me. I just went out there and did my job."

Glymph enjoys kicking with Thompson and Sanchez in practice -- although Sanchez has only handled punting duties in games this year -- and has learned from them how they mentally prepare.

"I feel like I learned a lot in that area, and also the little things," he said. "They've been kicking for a while, and they're technically stout kickers. Anything I can pull away from them to help me is huge."

Glymph, who also punted in high school, came to UAPB with the credential of making a game-winning field goal with no time left in a high school playoff game. He was orally committed to Jackson State University, but then-Grambling State University assistant coach Kendrick Nord established a relationship with Glymph on the recruiting trail that carried over into Nord's hire as UAPB quarterbacks coach last year.

That, and the fact UAPB alumnus and New York Giants punter Jamie Gillan has built a successful NFL career, were key in Glymph's decision to pass up destiny with Deion Sanders at J-State.

Aside from invitations to the Golden Lions' den, both Glymph and Thompson might still be kickers in Mississippi. Instead, first-stringer Thompson may have a shot to help UAPB exact revenge on his old team this Saturday.

"I have nothing but love for my former teammates over there [at Alcorn], but at the same time, I'm wearing the black-and-gold, and that's where my head and heart are at," Thompson said. "I'm on this side of the field this time." 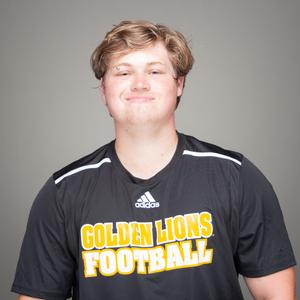 What: SWAC opener for both teams