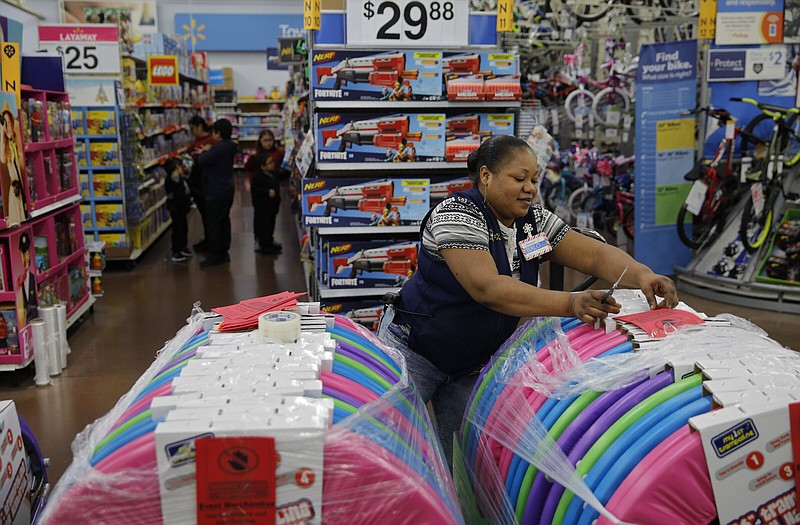 A Walmart employee labels items in preparation for a sale at a Walmart Supercenter in Las Vegas in this file photo. (AP)

Walmart Inc. said Wednesday that it plans to hire 40,000 store workers and truck drivers for the Christmas shopping season this year, well below the 150,000 it hired last year.

Walmart spokesman Nick DeMoss said the company's staffing level overall is stronger heading into the season than it was last year, so fewer extra workers are needed.

And as usual, current Walmart employees will have a chance to sign up for additional hours if they wish, before more workers are added.

"From there, we'll strategically hire any seasonal associates to help with the busy holiday season -- and that number will vary from store to store, depending on each store's individual needs," DeMoss said.

"It could easily link to advancements in innovation and automation," Spieckerman said. "Walmart has expanded self-checkout and any number of store-level process improvements that optimize employee tasks."

Spieckerman said the company's retention efforts may also be paying off and reducing "churn."

The seasonal jobs include working in-store, for home delivery services and for customer call centers.

The 40,000 jobs also include more than 1,000 permanent truck driver positions in Walmart's private truck fleet, which already has about 12,000 drivers.

Walmart is already the nation's largest private employer, with about 1.6 million workers.

As of Wednesday, neither e-commerce giant Amazon.com nor national retailers such as Target or Best Buy had revealed their hiring plans for the biggest shopping season of the year.

Danelle McCusker Rees, president of human relations at UPS, which has said it plans to hire more than 100,000 holiday workers, said this year's job market remains just as competitive as last year's.

Accounting services firm Deloitte forecasts a 4% to 6% increase in Christmas sales this year over last year.

Deloitte also expects e-commerce sales during the period to grow between 12.8% to 14.3% over the same period last year.

Walmart said in another news release Wednesday that it plans rollbacks on popular gift items such as toys, electronics and home decor and has expanded its returns window for eligible purchases made on or after Oct. 1 through Jan. 31.

In addition, curbside returns will be offered in a few stores the first week in October and expand to more stores over the next few months.

Walmart Plus members can also schedule a return on Walmart's app and hand off the item to delivery drivers.

Finally, Walmart has created Spark Good as a way for its customers to support causes they care about.

Spark Good Round-up lets customers using Walmart.com or the Walmart app round up their purchase total and donate the change to a charity of their choice at checkout.

Information for this article was contributed by Anne D'Innocenzio of The Associated Press.