Activists move against increase of vote threshold in Arkansas, saying it stifles power 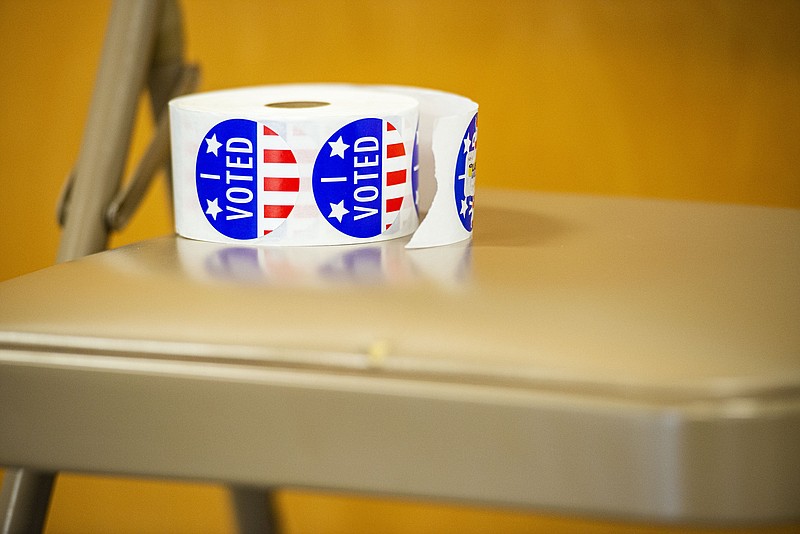 A roll of voting stickers is seen on Election Day, Tuesday, May 24, 2022, at the Elm Grove Community Center at Martin Luther King Jr. Park in Fort Smith. Voters in Sebastian County cast their ballots for several primary, county, city and school board races, as well as special tax elections. (NWA Democrat-Gazette/Hank Layton)

Activists are beginning a campaign against a ballot question that would increase the percentage threshold needed for Arkansas voters to approve an amendment to the state's constitution.

Abdul-Bey cited policy changes that have come through constitutional amendments put to voters, including repeal of Arkansas' poll tax and adoption of a minimum wage.

Constitutional amendments approved via referendum have been a staple of Arkansas politics for more than a century, according to CALS Encyclopedia of Arkansas. Major changes such as term limits for lawmakers and legalized medical marijuana were adopted through the referendum process.

But state Rep. David Ray, R-Maumelle, said the referendum process has been abused and become vulnerable to influence by out-of-state groups. Ray said his proposed change would ensure there is more "consensus" from voters when major political changes are proposed.

"This is not going to make it impossible to make change," Ray said. "What this is going to do is ensure there is a guardrail so things that are adopted have genuine consensus."

Ray said the state's referendum process is supposed to be about amending the constitution, but it has become more like a law-making procedure citing how Arkansas' constitution has 102 amendments while the U.S. Constitution has only 27.

"Our state constitution is Arkansas' charter document and it should only be amended when there is genuine consensus among voters," Ray said. "Issue 2 provides a much-needed guardrail so big money out-of-state special interests quit trying to hijack our constitution and ballot initiative process."

For Abdul-Bey, lawmaking isn't just for legislators. He said citizens through a ballot petition and referendum should have equal rights to change the law as members of the General Assembly.

"What is happening is that one body of democracy, the representative democracy, is attempting to impose a stricter burden on passing laws upon the other -- direct democracy," Abdul-Bey said.

The state legislature can refer constitutional amendments or statute to the ballots through a simple majority in both the House of Representatives and Senate.

Along with changing the threshold percent threshold needed for constitutional amendments to pass, voters will get a chance to weigh in on recreational marijuana legalization, religious liberty and whether the General Assembly should be able to call itself into special session.