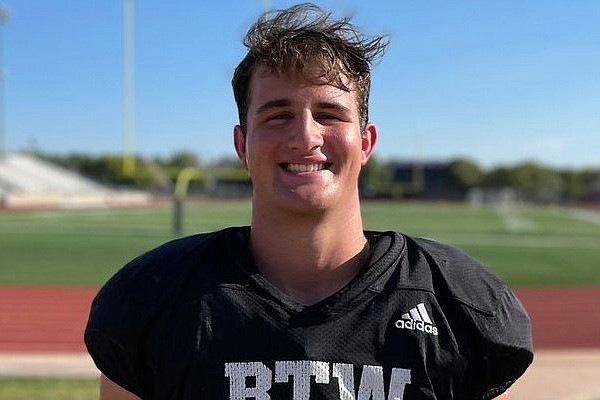 CARROLLTON, Texas — Arkansas’ success at linebacker has future linebacker Carson Dean fired up about playing the position as a Razorback.

Dean has started the season strong with 32 tackles, 9 tackles for loss, 2 interceptions, 1 sack, 2 pass breakups and 2 blocked kicks in 3 games.

Dean, 6-4, 232 pounds, of Carrollton (Texas) Hebron, had scholarship offers from Texas, TCU, Ole Miss, LSU, Baylor, Missouri, Colorado, Nebraska, Indiana and other programs before pledging to the Razorbacks in March.

Seeing Arkansas have three linebackers with 100 tackles or more last year and also having senior Bumper Pool and junior Drew Sanders at No. 3 and No. 5 in the SEC in tackles is motivation for Dean.

“I don’t know a duo in the the country better than them,” Dean said of Pool and Sanders, an Alabama transfer. “Nobody is putting up numbers like they are. It means a lot just knowing I’ll be coached by the same dudes, and me and Drew will be doing the same kind of things. That’s really good to look forward to.”

“He’s my guy,” Dean said. “It means a lot knowing he’ll be watching me play for the first time in person because he’s only seen film of practice. When it’s game speed, it’s a whole different atmosphere. I just have to do what I do every Friday night.”

He recorded 86 tackles, 10 sacks, 5 pass breakups, 2 forced fumbles and 1 interception that was returned for a touchdown as a junior in large part because of his speed.

Scherer and Dean have a strong connection.

“He’s just a very likable person, he’s young, he’s played (college),” Dean said. “He didn’t play too long ago, so he has that connection. He knows how to connect with players. He’s just chill and laid back.”

Their conversations often focus on their favorite Mexican restaurants.

“Probably eating and places to eat,” Dean said of their talks. “That’s what we’re always talking about. He likes Mi Cocina and I like Torchy’s.”