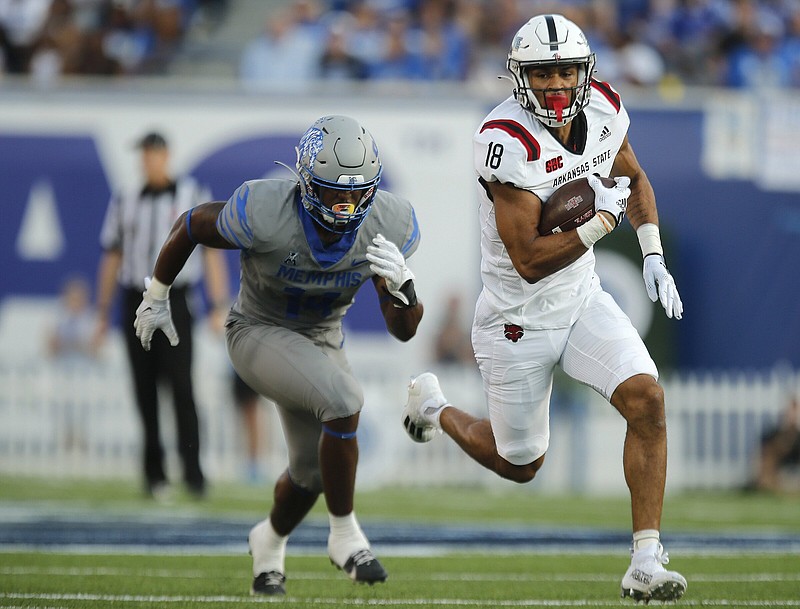 Arkansas State tight end Seydou Traore has developed as a key member of the Red Wolves’ passing game. He had six catches for 120 yards and a 51-yard touchdown in Saturday’s loss to Memphis. (Arkansas Democrat-Gazette/Thomas Metthe)

On a field in London -- its soccer markings faded but present -- a shirtless Seydou Traore faked to the right, then cut back to his left. Traore sprinted seven steps before fading left toward the camera.

He leapt off his right foot, extending his right arm well above his 6-4 frame and hauled in a pass with one hand.

The Twitter clip traveled an ocean and nearly 4,500 miles to the west coast of Florida. Chinchar saw "a freak," but also a player who didn't know what he was doing.

Although it was late in the summer with the 2020 season only a few weeks away, the timing couldn't have been better. Clearwater International needed another receiver. Traore's NFL Academy team wasn't going to be able to play games that fall because of covid-19.

Bringing Traore to the United States was a relative no-brainer, even if it was going to take a few weeks of adjustment in what would be his only season at Clearwater.

"From the point of connections and getting to know everyone, it took me a while," Traore told the Arkansas Democrat-Gazette this week. "But in terms of playing it was really like, 'Hey, this is your opportunity. Go make plays.' "

That opportunity turned into a scholarship at Arkansas State, albeit at tight end, not wide receiver -- something that took a little selling from Coach Butch Jones. On Saturday, Traore will share the field in Norfolk, Va., with Old Dominion's Zack Kuntz, a preseason all-Sun Belt Conference honoree at tight end and a potential 2023 NFL Draft selection.

It's all the more timely following, by far, the best game of Traore's brief career -- with six catches for 120 yards and a 51-yard touchdown at Memphis -- and his emerging presence as an integral part of the Red Wolves' passing game.

The face-off, while not head-to-head, is yet another opportunity. Traore said he knows something about not letting them slip through his grasp.

"If I can show out and have a better game than him, what does that say about me?" Traore said.

When Jones spoke about Traore on signing day in February 2021, he had lofty praise for a prospect who'd only played in eight games.

Before that, Traore had never experienced football in pads. He'd always loved throwing a football around with his friends and had played flag football and 9v9, yet soccer was his main sport.

"If you look at Travis, his growth and development, he didn't really become Travis Kelce until his senior year," said Jones, who coached the future six-time All-Pro tight end at Cincinnati in 2010-12. "We knew what Travis could do, but you never saw the wide variety of skill sets that Travis possessed really come out."

Chinchar had the likes of Tennessee and Iowa State eyeing Traore as a wide receiver at the college level.

But Jones and ASU called him one day and asked about Clearwater's tight end. Chinchar started to detail a different prospect, only for the Red Wolves to clarify that they were asking about Traore.

It wasn't the easiest sell to Traore, who'd envisioned himself a wideout. But ASU saw a player who was barely scratching the surface of his potential.

The Red Wolves wanted him as part of a larger plan. ASU had already gotten a commitment from future classmate and fellow tight end Emmanual Stevenson. It would, a few months later, add Miller McCrumby, another wide receiver-turned-tight end, in its 2022 recruiting class.

"Being able to find an individual that possesses [blocking and receiving] traits is very difficult," Jones said of the challenge in recruiting tight ends. "But if they have them, obviously, they're very sought after."

A similar diversity of skills was among the reasons Old Dominion Coach Ricky Rahne wanted Kuntz after being hired by the Monarchs in December 2019.

Over six seasons as an offensive assistant at Penn State, Rahne had the talents of future NFL tight ends Jesse James, Mike Gesicki and Pat Freiermuth at his disposal. The 6-8, 245-pound Kuntz joined that line with the Nittany Lions but caught just three passes in as many years from 2018-20.

"He's a hard worker. ... He's very talented, he's fast, he's big," Rahne said of Kuntz on the Sun Belt's weekly teleconference. "Like anything else on offense, you're just trying to create as many matchup problems as you possibly can, and having a dynamic tight end certainly does that."

At 6-5 and 250 pounds, Kelce's probably a better comparison for Kuntz than Traore.

Traore sees more of himself in Atlanta Falcons tight end Kyle Pitts. An elite, athletic pass-catcher with room to grow as a blocker at Florida, Pitts was selected fourth in the 2021 NFL Draft and has already established himself among the upper echelon of the position.

To expect Traore to flash that kind of potential this quickly is probably unreasonable. It was barely two years ago that Traore put pads on for the first time, and during that initial game, Chinchar said he remembers Traore's eyes being "as wide as dinner plates."

But the sophomore said he knows there's another level to be reached as the game continues to slow down.

"I set high expectations for myself," Traore said. "So when I hit those types of goals and accomplishments, I'm like, 'Cool, let's go to the next step.' Because I won't allow that kind of stuff to get to my head."