‘Avatar’ gets a rerelease before sequel 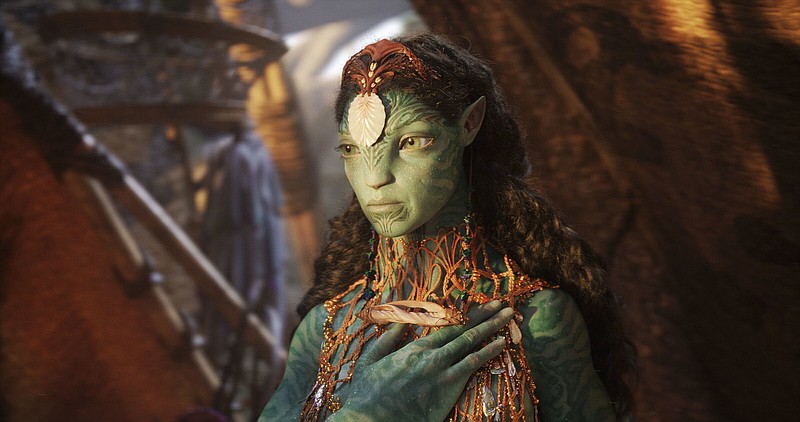 Princess Neytiri te Tskaha Mo’at’ite (voiced by Zoe Saldana) saves Jake Sully — an earthling spying on her people for a force trying to drive them off their land in order to steal their unobtanium — from a pack of viperwolves and trains him in the ways of the Na’vi in James Cameron’s “Avatar,” which is returning to theaters this week.

In anticipation of the release of "Avatar: The Way of Water," the first of three planned sequels to James Cameron's 2009 science fiction epic "Avatar" in December, the original film is being re-released into theaters this week.

That's a savvy move, given that almost no one seems to remember much about "Avatar." It won three Oscars and is usually cited as the highest grossing film of all time, having raked in more than $2.8 billion worldwide.

"Avengers: Endgame" (2019) is a close second and Cameron's "Titanic" is third with $2.2 billion, but we should keep in mind that if we were adjusting these figures for inflation, "Gone With the Wind" would still be the all-time box-office leader with more than $6 billion in ticket sales in today's dollars. More people saw "Titanic" in a theater than saw "Avatar"; far more saw "Gone With the Wind."

I can't imagine anyone being all that het up to see "Avatar: The Way of Water," but William Goldman had it right when he wrote in his 1983 book "Adventures in the Screen Trade" that "Nobody knows anything ... . Not one person in the entire motion picture field knows for a certainty what's going to work. Every time out it's a guess and, if you're lucky, an educated one."

Maybe the educated play is to bet on James Cameron. But that's only if your primary concern is making a successful movie.

I wrote a piece about "Avatar" a few weeks after it came out. Since Cameron is re-releasing his own work this week, I thought I'd emulate the master and re-run the best parts of my piece which, all fake humility aside, got more than a little reaction.

It isn't a proper review, but a piece written after "Avatar" -- six weeks after it was released -- officially replaced "Titanic" as the biggest movie of all time:

"Most people didn't think 'Avatar' would come close to this kind of box office. Maybe Cameron did, maybe he's not surprised that he has done it again, but you can count me among those who thought a science fiction eco-fable featuring computer-generated warrior fairies would probably have less broad appeal than a romance centered on a famous disaster. After all, my mom liked 'Titanic.' I don't think she cares much about the plight of the Na'vi.

"From my point of view, Cameron's success is annoying to the extent that people expect me to have some theory on the movie -- on its success, on its "message." I don't. I think it's a brilliantly realized, technically superior movie.

"I don't hate it: I think it's pretty obvious, a dumb story with simply awful dialogue, but in the end it's probably worth watching once for the innovation. We've been talking about the eventual obsolescence of motion picture actors for 20 years now -- Cameron's "performance capture" rig has brought us to the brink of that particular abyss. It's something worth thinking about.

"What worries me is how everyone -- from right-wing ideologues to the Vatican -- seems to have so much to say about the movie's 'ideas' and Cameron's cosmology. While Cameron's obviously not a dumb guy, the point of 'Avatar' is to make a whole lot of money -- more money than any other filmmaker has ever made. It's a pop product, not a work of sustained coherency. Do you see Vedic references in the movie? Maybe Cameron planted them just for you. He made the Na'vi the color of Sri Krishna!

"And sure, it's a metaphor for colonial imperialism and you can, if you want to, see the bellicose earthlings as stand-ins for Crusader Nation. There's nothing subtle or surprising about Jake Sully's character arc in "Avatar" -- he's an infiltrator who ends up going native.

"He falls in love with a princess. He undergoes an apotheosis reminiscent of Jesus Christ. What passes for philosophy in the film is a cafeteria plan featuring tidbits of New Age, American Indian and Christian theologies.

"Which is perfectly all right for a big dumb movie built to make money but hardly worthy of serious examination. 'Avatar' isn't only critic-proof, it resists serious criticism. You might as well analyze a beach ball.

"So understand, I'm all right with 'Avatar'; it's OK if you like it, if you want to go see it again and again. It's your (or your parents') money. I don't even care if you want to go online and pretend that you're a Na'vi, if you write little poems in your little language or Photoshop yourself into a cyan-skinned cat person -- lots of people go down lots of online rabbit holes without incurring ridicule.

"But please understand this -- I'm not interested. I don't really care how your Na'vi fantasy team is doing any more than I care about that Hogwarts gang or any of those bloody elves. 'Avatar' is a movie, and though I recognize it's a very accomplished one, it's not a great one, and it's honestly depressing to hear people who ought to know better discuss it like it's got something meaningful to tell us.

"The chief importance of 'Avatar' is that it's yet another signifier of the infantilization of our culture. We shout and bray at each other, and consider thoughtfulness a weakness. We are entertained by crude spectacles and bored by adult conversation. We are mostly children these days, petulant and rude and convinced of our own specialness.

"Cameron is not to blame for this. He may have created Pandora, but not our current troubles, or our smug self-regarding softness. He just found a very lucrative way to exploit them."

Print Headline: ‘Avatar’ gets a rerelease before sequel