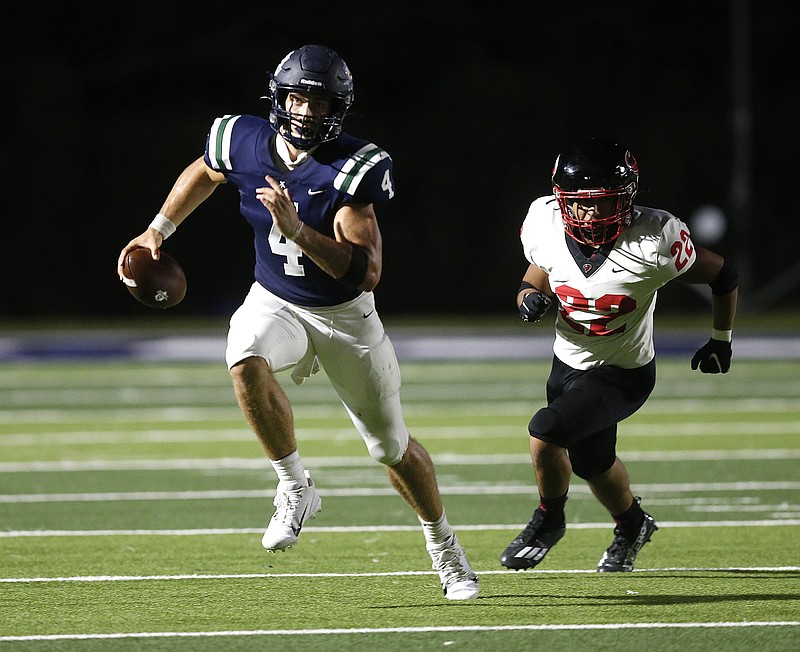 Pulaski Academy vs. Little Rock Christian has become one of the premier rivalries in the state over the past decade.

This year, the No. 9-ranked Warriors will make the 6-mile trek to face the undefeated No. 3 Bruins with both squads looking for a second conference win.

The Warriors (3-1, 6A-West 1-1) and Bruins (3-0, 1-0) have combined to win the previous eight Class 5A titles, including three straight meetings in the final from 2018-20. They have met 12 times in the past 10 years, and that familiarity should carry over to a raucous setting tonight.

"Our campuses are so close. A lot of the kids know each other from their neighborhoods, their churches," Little Rock Christian Coach Eric Cohu said. "I think just because of the proximity nature of the two schools, and the relationship of so many players knowing each other, it certainly makes for a big atmosphere."

Pulaski Academy's prolific offense hasn't taken a step back this season, despite the losses of Arkansas Democrat-Gazette All-Arkansas Preos Player of the Year Joe Himon at running back and quarterback Charlie Fiser. In their places this season are junior Kel Busby and senior Kenny Jordan, respectively.

Jordan has done well in place of Himon, something he did in 2021 when the latter dealt with injuries. Jordan continues to give the Bruins a weapon in the running and passing game out of the backfield, totaling 508 yards and six touchdowns.

The calling card of Pulaski Academy's offense is its passing threat, and that hasn't changed with Busby behind center.

Pulaski Academy's has four receivers with more than 100 yards receiving each, led by senior wideout Jaylin McKinney's 28 receptions for 558 yards.

The Little Rock Christian defense figures to have its hands full, but the unit has been strong in its first three tests, holding opponents to 17 points per game.

The Warriors are led by junior quarterback Walker White -- the No. 1 junior in Arkansas according to 247Sports. He holds 15 Division I scholarship offers, including ones from the University of Arkansas, Ole Miss and Florida.

Cohu said the stakes of playing Pulaski Academy are always high but will be especially so with postseason seeding on the line this early in the season.

"We certainly would like to be 2-0 right now instead of 1-1 in conference [play]," Cohu said. "What that does is, it just elevates each game as we go from here on out we'll be fighting for seeding. A win against Pulaski [Academy] would really put us back in the hunt for bye Round 1 and control our own destiny and maybe even be in the hunt for the conference title."

Pulaski Academy has won the previous four meetings with Little Rock Christian by an average of 40 points. Last season, the Bruins won 63-14, s the most lopsided loss of Cohu's tenure with the Warriors.

With all of the moving parts on both teams, Cohu said he's looking for his team to put on a better showing.

"Each team and each year brings a new dynamic. Things aren't static. They don't stay the same," he said. "Last year especially, we just didn't compete at all. It's very important in the game of football to compete at your highest level. It's real important for us to compete at a very high level [tonight].

"Each year we have a little bit of a different DNA of the team. And so you want to put your best foot forward from a football standpoint, and try to minimize their strengths, and attack their weaknesses and they'll do the same to us."

NO. 9 LITTLE ROCK CHRISTIAN AT NO. 3 PULASKI ACADEMY