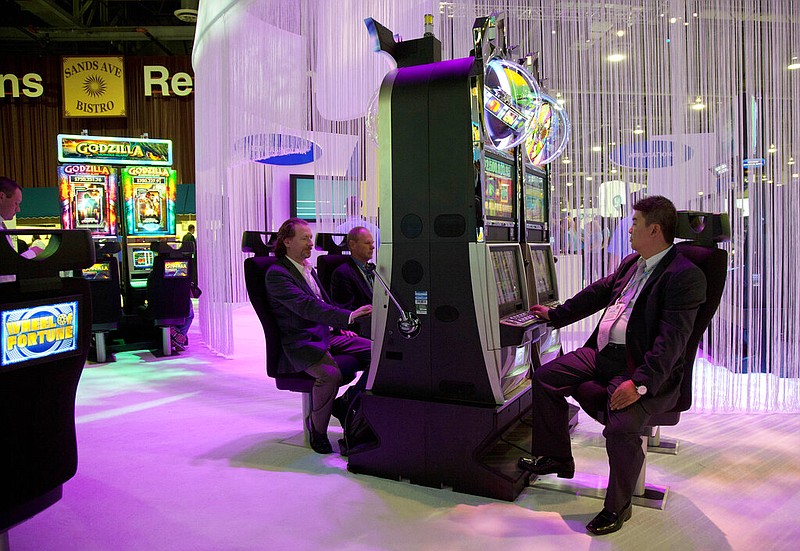 Casino industry representatives play on Wheel of Fortune slot machines at the International Game Technology exhibit during an industry conference in Las Vegas in this Oct. 4, 2011 file photo. (AP/Julie Jacobson)

The commission's action clears the way for the Saracen Casino Resort in Pine Bluff to contract with IGT for the multijurisdictional wide area progressive system MegaJackpots.

"They are slot machines that are linked to other states' slot machines, and you get the larger jackpots at the top and the vendor is responsible for the large jackpot, provided it is hit here," she said.

Saracen Casino Resort plans to "bring in primarily the Wheel of Fortune product, which is far and away the most popular product," said Carlton Saffa, chief market officer for Saracen Casino Resort. The IGT platform is considered to be the industry standard, he said.

"We will begin to tell Arkansas as soon as we can get the machines in, assuming you all approve this, that our machines quite literally will be linked to the Las Vegas strip," he told the racing commission. "That's what Amendment 100 [to the Arkansas Constitution] has allowed us to do."

Afterward, Saffa said he's confident the casino's machines will be linked to the slot machines on the Las Vegas strip by the end of this year.

System links will be installed to the Money Mania game, which has a primary reset amount of $100,000, and three separate Wheel of Fortune games with primary reset amounts of $200,000, $500,000 and $1 million, respectively, an IGT official said in a letter to Campbell. The games range from a penny-based game to a $5 game.

"We haven't made a decision on No. 1," he said, referring to a question about whether Southland plans to contract with a company that offers multi-state, progressive jackpot games on slot machines.

A spokesperson for Oaklawn Racing and Gaming didn't respond by early Thursday night to questions about the largest jackpot paid by Oaklawn and whether Oaklawn plans to contract with a company that offers multi-state, progressive games on slot machines.

The licenses are authorized for expanding gambling operations at Oaklawn Racing and Gaming in Hot Springs and Southland Casino Racing in West Memphis, and for casinos in Jefferson and Pope counties with the endorsement of local officials.

Last November, the Pope County casino license was handed to Cherokee Nation Businesses to build Legends Resort & Casino after the Arkansas Racing Commission ruled to nullify the license previously awarded to Gulfside Casino Partnership. The Pope County casino license has long been a source of turmoil for the county and the state, resulting in numerous court cases. On July 11, the Russellville Planning Commission approved the proposed project.

In August, the state Board of Election Commissioners declined to certify the popular name and ballot title for the Fair Play for Arkansas 2022 proposed constitutional amendment. The board approved a motion by board member Bilenda Harris-Ritter not to certify the ballot title for the proposed ballot measure because it didn't refer to the existing casino license in Pope County and is misleading.