Deep in the heart: Pool, Sanders lead Hogs back home 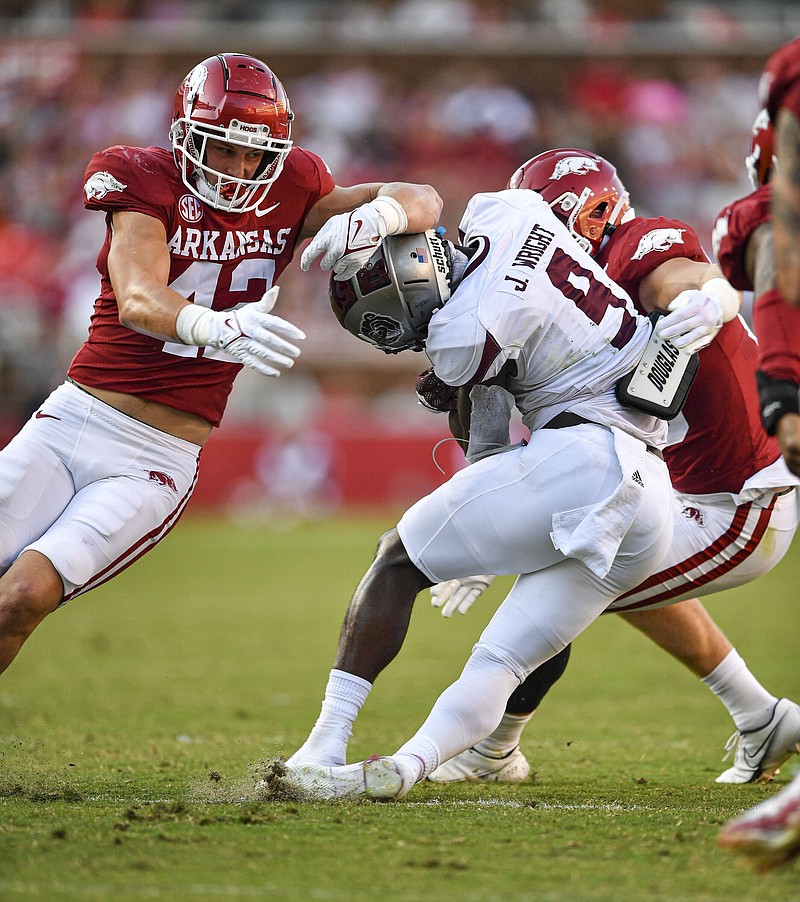 Arkansas linebackers Drew Sanders (left) and Bumper Pool tackle Missouri State running back Jacardia Wright during last Saturday’s game. Sanders and Pool, both Dallas-area products, have combined to become a dominant duo for the Arkansas defense as the Razorbacks get set for Saturday’s matchup against Texas A&M at Arlington, Texas. (NWA Democrat-Gazette/Hank Layton)

FAYETTEVILLE -- A couple of high school products from the Dallas Metroplex who have risen to star status at the University of Arkansas will line up at linebacker for the No. 10 Razorbacks in the Southwest Classic on Saturday.

Bumper Pool and Drew Sanders will have huge responsibilities for the Razorbacks (3-0, 1-0 SEC) as they take on No. 23 Texas A&M (2-1) in the Aggies' conference opener at AT&T Stadium in Arlington, Texas.

The pair, who rank 1-2 in tackles for Arkansas, have bonded quickly.

Sanders, who worked as an edge rusher during his two seasons at Alabama, studied from Pool throughout the spring and leading into the season to pick up the intricacies of inside linebacker play.

"Especially for me, coming from a new position, having a guy with experience like that allowing me to watch him and learn from him and he can help me correct my mistakes, it's huge," Sanders said on Coach Sam Pittman's radio show Wednesday. "It gives me a step forward."

Both players are in the process of attacking record books.

Pool is within shouting distance of the Razorbacks' all-time tackle record held by Tony Bua, who will serve as the Hogs' honorary captain for the game. Pool has maintained a steady rise up the tackle chart, from his first game as injury replacement for Dre Greenlaw, through a nearly full season while playing with broken ribs in 2020, to a 125-tackle campaign a year ago while making one start in a group with veterans Grant Morgan and Hayden Henry.

Sanders has been an instant sensation as a hard-hitting, pass-rushing dynamo in his first season at Arkansas. The 6-5, 233-pounder from Denton Ryan High School is second in the country with five sacks as part of Arkansas' FBS-best 17 sacks through three games.

Pool earned team captain status in his return for a fifth season, granted by the NCAA due to the covid-19 crisis of 2020.

The 6-2, 232-pounder from Lucas Lovejoy High School on the eastern side of the Metroplex, has 378 tackles to rank fourth on UA's career tackles chart. That's 30 tackles shy of Bua's record of 408, with Jerry Franklin (382) and Ken Hamlin (381) in immediate striking distance.

Pool is averaging 9.67 tackles per game this season. If he keeps that pace, the road game at BYU on Oct. 15 would loom as the date he could overtake Bua.

"You know, I know it would mean everything to him if he could break that record," Pittman said Wednesday. "I know it would. To be perfectly honest with you, I think that was a big part of how we got him to come back.

"I told him when I was talking to him today there's only one guy in the world who can say they have the most tackles in the history of Arkansas football. There's not many of those things in life. If he could get it, how long he could keep it? I don't know. He's such a good person and good kid. I hope he can get that record. I think it would mean a lot to him."

Coach Jimbo Fisher has seen Pool in action each year he's been Texas A&m. Last year Pool tipped a Zach Calzada pass that also hit off the helmet of an Aggies lineman before setting into the outstretched arms of Montaric Brown. The Razorbacks turned that takeaway into a field goal drive that extended their seven-point lead into a 20-10 margin in the fourth quarter.

"Bumper Pool, I mean like he just might be a sixth year, I think maybe," Fisher said Monday of the fifth-year Razorback. "It seems like he's been there forever, and he's a really good player up front."

On Wednesday, Fisher spoke about the work of Pool and Sanders and complimented Arkansas defensive coordinator Barry Odom to start.

"His scheme, the foundation of it is the same, but Barry knows how to use his people and he moves them around. He gets them in things. I have a lot of respect for Barry as a coach. He does a great job and he puts those guys in position to make a lot of plays, and they do."

Odom got a good sense of how Sanders would fit into the Razorback schemes and molded them to highlight his strengths. Sanders' swim move was the talk of spring ball and he's used that, a bull rush and other pass-rush methods to notch his six sacks.

Sanders said Odom's schemes are playing into his strengths.

"We've got a lot of ways to get after a team and especially impact the quarterback," Sanders said last Saturday after having two of the Hogs' eight sacks against Missouri State. "Just how Coach Odom is scheming up everything, it's fun to play in, and it provides a lot of opportunities. It's our job to take advantage of it."

Speaking on the radio show Wednesday, Sanders said he's enjoying his time as a Razorback.

"It's been a good time," Sanders said. "It's a fun defense to play for. I love my coaches, love my teammates. It's been a great environment."

Sanders, who played with his hand on the ground a lot at Alabama, said he really wanted to go back to playing on his feet in choosing Arkansas as his transfer destination. He also specifically addressed how the Razorbacks are capitalizing on his skills.

"Most downs I'm in the middle, which is a lot different from where I was on the edge," he said on the radio show. "On some of those third downs, they'll put me on the edge and rush the passer and not let those two years go to waste from what I learned."

Pool comes from a Razorback family with his father, Jeff, attending school in Fayetteville, along with other family members, including sister Maddie, a member of the football staff.

Sanders, the son of a coach, was sitting in football meeting rooms by the age of 3, served as a ball boy and wound up "eating, sleeping and drinking football" he said on the Pittman radio show. He was a 5-star recruit who ranked as the No. 1 player in Texas by 247Sports as a senior.

"I played a bunch of positions and was really just labeled an 'athlete,'" Sanders said. "I ended up wanting to play defense and to be the hammer instead of the nail a little bit."

Print Headline: Deep in the heart