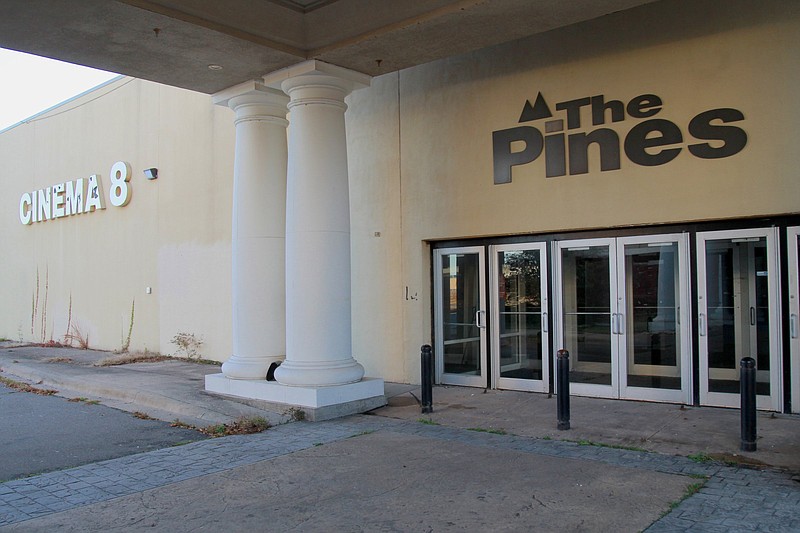 Saracen Cinema 8 sits just inside this south facing entrance at The Pines shopping mall, once a mecca for shoppers throughout the region, now all but deserted. (Pine Bluff Commercial file photo)

The Arkansas Court of Appeals on Wednesday affirmed a Jefferson County Circuit Court ruling to stave off an injunction it had previously issued against the owners of The Pines mall that would have allowed owners of a movie theater there to gain access.

Rain Investments LLC, owners of the Saracen Cinema 8 at the defunct mall, was granted a permanent injunction order on June 4, 2020, requiring James Vu, Thuytien Vu, John Vu, Theresa Vu and Cameron Appraisal Group of Highland Village, Texas, to "cease and desist" from evicting Rain Investments and collecting rent from the company on the theater. In addition, the Vus and Cameron were ordered to turn on the heating, ventilation and air conditioning system and electricity; make sure all systems were operating properly and give Rain Investments keys to the theater, mall, roof, storage and common areas.

Rain Investments, with Steven Mays Jr. and Okorie Ezieme as partners, was denied default judgment after alleging the Vus failed to answer to a summons. Rain Investments, however, was granted summary judgment for breach-of-contract claims on Jan. 19, 2021, but the trial court set aside the injunction against the Vus, and Mays and Ezieme then filed a motion for clarification, receiving a partial appeal Feb. 12, 2021.

"In our previous order, we held that we lacked jurisdiction to address several of Rain Investments' arguments because the issues were not eligible for interlocutory appeal," Appellate Judge Larry Vaught wrote in his decision released Wednesday. "We also held that, while Rain Investments' challenge to the dissolution of the injunction was properly before us on interlocutory appeal, its record and addendum failed to comply with our rules."

Vaught also wrote that Rain Investments has remedied the problem and filed a revised appeal, challenging the injunction. Judges Waymond Brown and Mike Murphy agreed with the decision.

Mays believes the removal of the injunction has kept him and Ezieme from giving Pine Bluff residents a functional movie theater.

"We had an opportunity to remain open in 2021," Mays said Wednesday. "Nobody agreed that we needed to move within 30 days. Everybody has been asking me for the last three years, what will we do with the mall as a whole?"

The Pines has been closed since 2020, according to Judy Vu, who was not listed in court documents but identified herself as a mall owner in a Feb. 25 Commercial article, 15 days after an overnight fire destroyed the mall manager's office. The Court of Appeals remanded Rain Investments' request for default and summary judgment at the time.

"The next step is to go to trial and then see what happens after the trial," Mays said, adding he was not sure of a trial date.

A message left at Cameron's office was not returned. Contact information was not available for the Vus, and it was not clear who represented them.