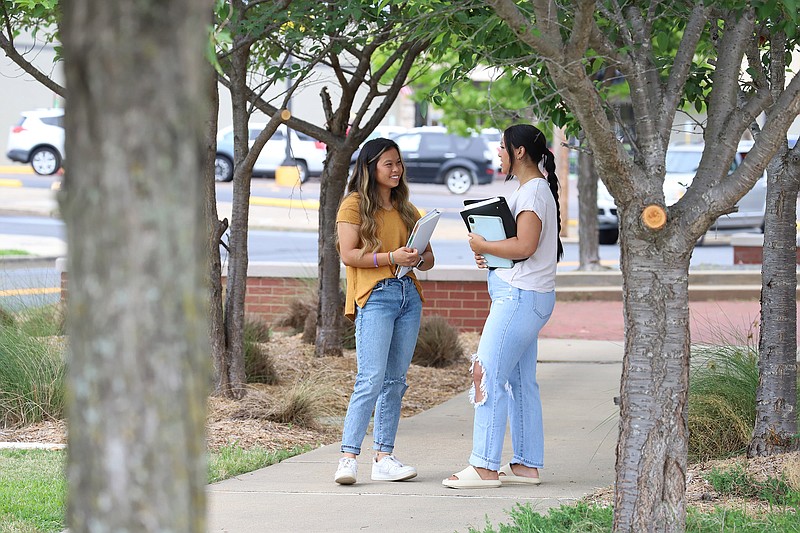 Students on campus at SouthArk this fall. By way of a vote of the board last night, the college is proceeding with plans to remove the word “community” from its name, becoming South Arkansas College by next summer. (Courtesy of Heath Waldrop/Special to the News-Times)

South Arkansas Community College won't be known by that name for much longer.

On Tuesday afternoon, the college's Board of Trustees voted unanimously to approve a plan to change the school's name to South Arkansas College.

"The idea has been around for a long time. Some of the folks who have been around a long time said it first came up 15 years ago... and it's really been front of mind for the folks at SouthArk for the past couple of years," college President Bentley Wallace said Wednesday. "We felt like finally the time was right to make the change."

Dropping "community" from the name is a reflection of how the college is changing and will continue to evolve in the coming years, Wallace said.

"It's reflecting our current and our future -- the comprehensive nature of the college... We feel that the name 'community' is perhaps a little bit limiting for future students or partners. We don't want our name to be a barrier," he said. "We think the name change better reflects where we're going... We're evolving as a college. We do have a broader approach and appeal as a college than we've had in the past."

Over the past few years, the college has made numerous changes that have helped to draw in students from a larger area, Wallace said, noting the addition of an athletic program that includes men's and women's basketball, softball and baseball; the introduction of new academic programs, including two grant-funded programs in forestry tech and medium and heavy truck tech, the latter of which will be offered starting next year; and improvements in the student experience, like the introduction of the student center at the McWilliams House.

A press release states that the college plans to continue collaborations with area and regional employers and other entities and enhance the student experience at the college in the coming years.

"Because of the vital role that the college plays in workforce and education, our reach continues to expand with employers and university partners locally, regionally and nationally," Wallace said in the release. "This move adapts the college's name to better reflect our current mission, role, and scope as a comprehensive two-year college, and future strategic initiatives."

The target date for completing the name change is June 2023, according to the press release.

"There's a lot of agencies that we'll have to work with to get the name changed... When the college was created, legislation was enacted to allow the college to form, so that will have to be changed," Wallace said. "We've already started working on a list of all our partners... You think about the IRS, the Department of Labor, all of our payroll transactions, our accrediting body, all of our vendors, partners -- everybody we do business with will have to be notified."

Wallace said the college will likely begin referring to itself as South Arkansas College around the start of the new year next January. The rest of the college's branding won't change, he added.

"When you see the new logo, it will be just that it has South Arkansas College on it, not South Arkansas Community College. The 'Stars' theme we've been building, that won't change; our website, emails, those won't change," Wallace said. "Colleges changing their names doesn't happen every day, but it's not uncommon."