The best films, performances of Toronto 2022 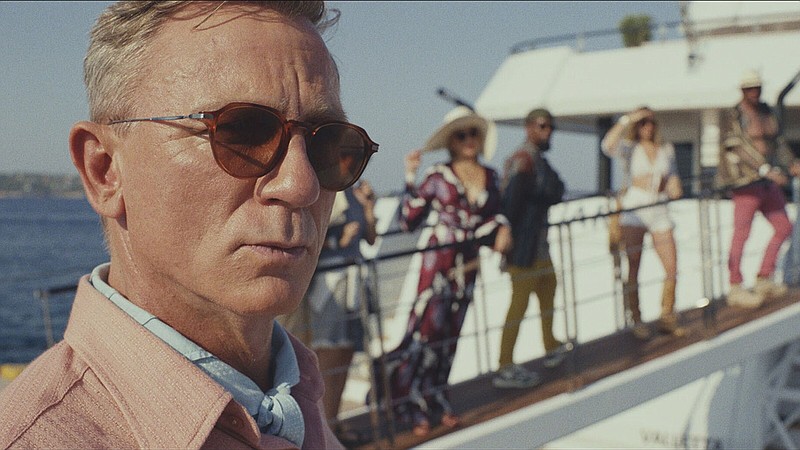 The Hockey Hall of Fame is situated in Toronto, which isn't surprising given the countrywide madness for the sport. What is less expected is the nature of the building itself, sitting on the northwest corner of Yonge and Front streets. The building is older, ornate, almost baroque in fact (possibly Palladinian, but don't quote me on that), with faux battlements and a kind of fancied ornamental presentation that you might expect for a rectory, or international consulate.

That such a building houses the heroes of a sport historically so rough-and-tumble, teams regularly employed brutish thugs as "enforcers" in order to protect the skilled players from getting their helmetless domes bashed in, offers an interesting juxtaposition for one of the city's other best-known attractions, the Toronto International Film Festival (TIFF). For all its glamour, and celebrity sightings, and booze-fueled chic parties that last into the wee hours, the nuts and bolts of the event are the movies themselves, the jarring, often desultory selection of some 300+ features culled from all over the world, set before audiences and critics, to be devoured, evaluated, critiqued and either celebrated or neglected, as the case may be.

As I mentioned before in previewing this year's festival, Toronto International Film Festival '22 might be my last go-round with the festival, depending on my employment situation at the beginning of the school year in 2023, so I approached this year's installment with a bit more wistfulness and reverence than usual. As always, there was a tremendous amount to take in -- beyond the 25 films I got to see, there were endless discussions with fellow critics, and patrons, and the sheer pace of the event, which often leaves you running all over the Entertainment District, from screening to screening -- and a lot of things to evaluate. So, for possibly one last time, let's revisit the superlatives for the festival and see how we ended up.

Most Unlucky Moment: R.I.P. Airpod Pro. On my first day of the festival, I was in the elevator of the apartment building I was staying in. Right before I got to the ground floor, I thought to take out my Airpods and pop them in. Unfortunately, one squirted out of my fingers, and I watched in horror as it hit the floor and skittered away from me, just as the elevator doors were opening, creating a gap between the lip and the floor edge which the airpod promptly fell through. Not an auspicious beginning.

Most Irritating Ad Bumper: "The Search for Wonder" Bulgari (sorry, Bvlgari!). Each year, before every public screening, the festival runs a series of sponsor ads (including RBC, Bell, and others), which repeat for each screening without much variation. Easily this year's most irritating entry was a "film by Paolo Sorrentino" for the luxe jewelry brand Bvlgari, that features Anne Hathaway and Zendaya as they pretend to enjoy each other's company, dancing in a fancy hotel room as a bunch of pretty flowers rise up into the sky. All of it is annoying, but no single element was as blithely idiotic as the opening voice-over, breathlessly spoken by one of the models: "In the search for wonder, there are no endings, only new beginnings." This ... doesn't mean anything, but is designed to sound super-deep.

Best Represented Thematic Element: Fathers and daughters. They figured prominently, in various guises -- a plaintive woman trying to save her doomed padre in Ariel Escalante's "Domingo y la niebla"; an angry teenage girl lashing out against her morbidly obese father in Darren Aronofsky's "The Whale"; and, most devastatingly in "Aftersun," a grown woman reminiscing about a vacation on a Greek resort she spent with her father some decades before -- with a single reversal of trope: Instead of the fathers doing the protecting, it's the children trying to keep them safe.

Most Cruelly Amusing Scene: A scene from "Triangle of Sadness." Ruben Ostlund's wickedly funny takedown of the rich and pompous features a bunch of outrageous moments, but none more perfectly mean-spirited than a shot of one helpless patron on a luxury cruise ship during a heady gale, who helplessly slides back and forth on the filthy floor of her ruined bathroom, trying to time it right so she can throw up into the toilet as she passes in front of it before slamming into the wall.

Most Irritating Common Element: Overly theatrical emoting/staging. One unfortunate outcome of adapting a play to the screen that's all too common: Carrying over these cliched dramatic devices from a medium in which bigger emotion is welcomed, to one in which more lifelike subtlety is the preferred currency. To wit, the classic "character laughing uproariously at an inappropriate time" bit (found here in Sarah Polley's "Women Talking," an otherwise strong chamber piece); and "character runs the spectrum of extreme emotion through one short conversation" gambit (occuring in "The Whale," in which a female character appears before the protagonist and goes from being kind and caring to furious and bitter and back again in a single, stagey interaction). Going big can work nicely on the stage; on the screen, it often comes off as hackneyed.

Worst Food Experience: Hardened egg shards. Regular readers of this annual piece have perhaps come to notice I often lambast the food available in the Entertainment District of Toronto. My usual disclaimer: I'm sure there's wonderful cuisine in the city, but very little of it appears to exist near the festival. Among a host of other unpleasant culinary experiences, whatever one nearby cafe referred to as "scrambled eggs" was easily the worst: Greasy shards of rubbery eggs that tasted of stale oil and failure. I couldn't even reverse engineer how such a horrid dish was created.

Best Food Experience: Pasta Arrabiata at Jz's Pizza. However, on my last night, one of my roomies and I dined at an unassuming little pizza/pasta place a short walk from the theaters. It was exceedingly good, even by snooty Philadelphia standards for pasta. All hope is not lost, Toronto! We have something to work with here.

Craftiest Screenplay: "Glass Onion: A Knives Out Mystery." Fans of Rian Johnson's brilliantly clever "Knives Out" should be more than satisfied by the sequel -- which pits uber-detective Benoit Blanc (Daniel Craig) against a tech-giant wunderkind (Edward Norton) on a remote Greek isle with a bunch of his friends -- as it's every bit as twisty and sharp as its predecessor. Under the circumstances, following up a monster hit that everyone loved with another whodunnit that has to fool an audience absolutely ready to pounce on any tip-off, would seem a daunting task to say the least, but Johnson, whose love of Agatha Christie-style mysteries is well-known at this point, doesn't flinch, and the film comes through in all the ways you do (and don't) expect.

Most Enigmatic Ending: "R.M.N." I remain an unabashed fan of Romanian director Cristian Mungiu, and his new film, depicting the rising xenophobic tension in a small community in Transylvania after immigrants from Sri Lanka arrive to work at the local bakery, is very good. However, whether I was just wiped out in the midst of a five-film day (this was my last screening of the late eve) or, as other critics seemed to confirm with me, the ending -- which I won't describe for obvious reasons -- takes an odd and somewhat nonliteral bent (for a film that was otherwise pretty stolidly verite), that seemingly could be interpreted any number of ways, none of which made sense to me. It's not a complaint, exactly, but expect to feel more than a little out of the loop (unless you keenly observe elements I must have missed) by the end.

Best Dog: Louis, from "The Eternal Daughter." In a festival that seemed to have precious few animals that weren't being chased around for slaughter ("R.M.N.," "Joyland"), or bonked on the head with a rock ("Triangle of Sadness"), Louis, the adorable spaniel who trots around the murky, gloomy grounds of an old hotel, lies on his back for belly scratches, and curls up comfortably on the bed next to his people. The film is a sort of Gothic horror story -- albeit in atmosphere more than act -- but Louis, a good boy who never loses his verve or tail wag, keeps things from getting too dark.

Biggest Disappointment: "The Fabelmans." Steven Spielberg's autobiographical movie, about a young kid who becomes obsessed with filmmaking as his family life falls apart, was greeted rhapsodically by many members of the press after its world premiere (making a film about one's love of film tends to easily win over the cinephile crowd), but I found it overly sanitized and indulgent, glossing over any depth of emotion or sense of wound in favor of wish-fulfillment fantasy. It will doubtlessly be nominated for a slew of awards, but it was a significant misfire for me.

Best Actor(s): Eddie Redmayne, "The Good Nurse"; Brendan Fraser, "The Whale." I'm just going to have to cheat on this one and select two very different performances. Redmayne, playing real-life serial killer Charlie Cullen, is all gentleness and reserve, until near the end, in which the lid is finally pried off, revealing the churning chaos inside. It's a remarkably restrained (and terrifying) performance. Fraser has already gotten enormous acclaim for his role as a 600-pound online English professor (coincidentally, also called Charlie), still mourning the loss of his life partner, and deserves every bit of it. The movie is a bit of a mess, but his performance is absolutely sterling.

Best Actress: Tilda Swinton, "The Eternal Daughter." Hard to go against Swinton, who plays not only the main protagonist, a middle-aged documentary filmmaker, who takes her mum to a mysterious old hotel in hopes of bonding with her, in Joanna Hogg's esoteric drama, but the mum as well. It might seem a gimmick, but Hogg (Swinton's actual daughter, for the record) has something considerably deeper in mind, while realizing a command performance from her celebrated mother.

Best Film: "Aftersun." Charlotte Wells' extraordinary feature debut hits like a thunderclap directly over your head. Primarily, it's about a grown woman's reminiscence about a vacation taken with her father at a Greek resort in the mid-'90s, when she was 11, which utilizes video cam footage the two of them shot of each other, along with a series of oblique -- remarkably resonating -- metaphors that suggests the enormous emotional carriage the trip conveyed. The film digs deep into your subconscious, provoking your sensibilities until you're helpless to protect yourself. With humor, humanity and an astonishing eye for detail and nuance, it is easily one of the very best of the year, and a perfect note to end a wonderful run in Toronto.