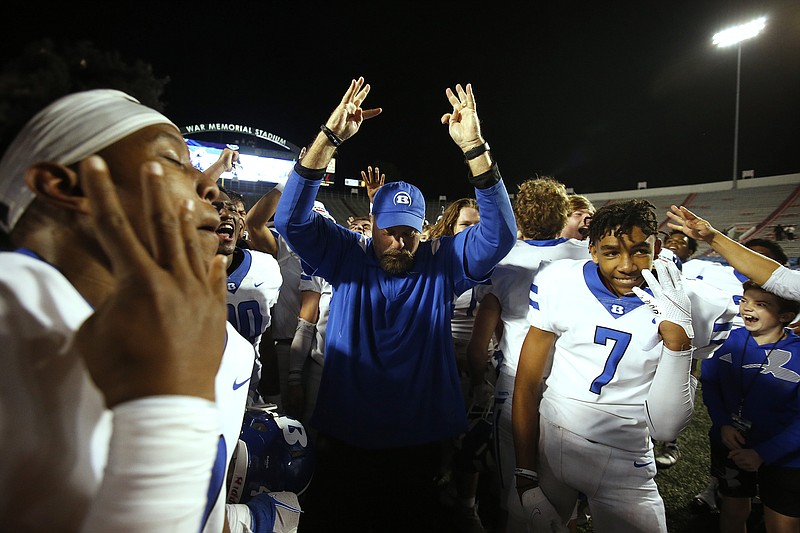 FORT SMITH NORTHSIDE AT NO. 1 BRYANT

NOTEWORTHY Bryant has won the past seven matchups against Fort Smith Northside. ... Bryant has won 43 straight games against in-state competition. Bryant beat Northside 42-10 in the second round of the Class 7A playoffs last season. ... Northside quarterback Dae'Marion Savoy has passed for 740 yards and six touchdowns. ... Bryant is allowing 13.5 points per game.

NO. 2 CONWAY AT LITTLE ROCK SOUTHWEST

NOTEWORTHY Conway won the only meeting between these two 62-0 in 2021. ... Little Rock Southwest took its second-ever victory Sept. 9 against Rogers Heritage. ... Conway has won nine of its past 11 conference games, with both losses coming to Bryant. ... Conway quarterback Donovyn Omolo has passed for 931 yards and 10 touchdowns this season.

NO. 9 LITTLE ROCK CHRISTIAN AT NO. 3 PULASKI ACADEMY

NOTEWORTHY Pulaski Academy has won the past four meetings by an average of 40 points, including 63-21 in the 2019 Class 5A state title game. ... The Bruins have won 32 straight in-state games since2019. ... Pulaski Academy's Jaylin McKinney leads the state in receiving yards with 558. PA's Kel Busby and Little Rock Christian's Walker White are second and 12th, respectively, in passing yards. These schools account for the past eight Class 5A state championships.

SPRINGDALE HAR-BER AT NO. 4 BENTONVILLE

JONESBORO AT NO. 5 CABOT

NOTEWORTHY This is the first time since 2015 that these two will play as conference foes. ... Cabot has won eight of the past 10 meetings. ... Both of Jonesboro's losses have come by seven points or less. ... Cabot running back Evion Jimmerson is averaging more than 100 yards rushing per game. He rushed for 53 yards on nine carries in a 47-27 Cabot win last season.

BENTONVILLE WEST AT NO. 6 FAYETTEVILLE

SILOAM SPRINGS AT NO. 7 LAKE HAMILTON

VAN BUREN AT NO. 10 GREENWOOD