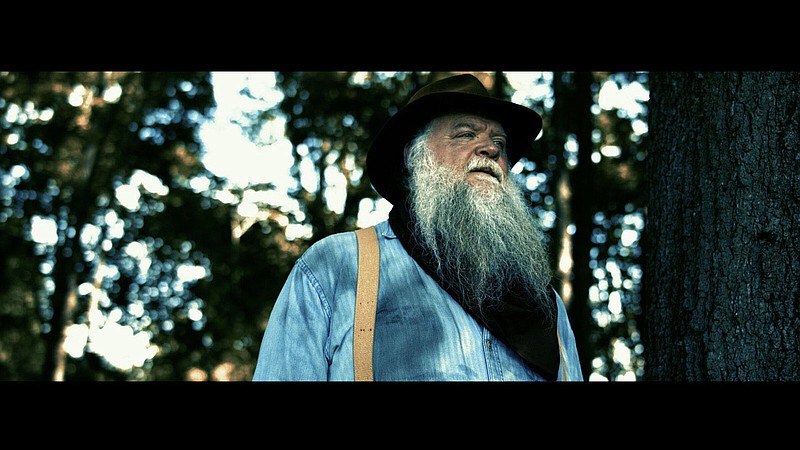 Veteran Arkansas character actor Mike Brabender gets a star turn in the short “Bloodlines,” which screened at the recent Firehouse Festival in Cabot.

When I think of the big filmmaking communities in Arkansas, I first think of Little Rock and Bentonville, both of which have had feature films shot there. Then I think of Conway, which has a film school. Then I think of Hot Springs, which has the documentary film festival. One town that I would never suspect of having its own filmmaking community is Cabot. In fact, I rarely think about Cabot at all, unless I'm happen to be passing by and am craving a David's burger. It's one of those Southern high school football towns.

So, when I heard the news that Cabot was going to be putting on the Firehouse Film Festival on Sept. 15, it piqued my interest. I pulled into downtown Cabot and was greeted with an array of food trucks. The smell of funnel cakes, barbecue, and street tacos permeated the air as the retro-rock sounds of Kenny Loggins blared over loudspeakers. I imagine this is what their Friday night tailgates look like during high school football season. Across the street nestled slightly out of my eyesight was the Cabot 8 VIP Cinema, one of the plethora of theaters that Matt Smith owns across the state.

The cinema's parking lot was packed with cars. People, mostly locals, lined up outside the doors waiting to take their seats at the one-night festival. As they entered, they were greeted by volunteers from the Cabot Foundation for Arts and Culture (CFAC). The inside was decked out in black and gold; the planning committee was definitely aiming for an Oscars ceremony-type vibe. Everyone was handed a personalized lanyard and was ushered to a photo booth station, decorated with top hats, sunglasses, and lots and lots of glitter. The glitz and glam was out in full force it was apparent that a lot of effort was put into this small-town festival.

This was actually the second year of operation for this particular little festival that has been dubbed the Firehouse Film Festival, which I have to admit is a peculiar name for a festival. As Becky Williams, the director, explained, the first film fest was held in a defunct firehouse in downtown Cabot in an attempt to bring more people and business to the area. She would have continued that tradition this year, but she explained that air flow in the firehouse was all but nonexistent and temperatures rose during the screenings to somewhere in the ballpark of 120 degrees, which might have made the filmgoing experience a bit uncomfortable. But despite the heat, last year's festival drew a packed venue, every seat taken, on the brink of breaking the fire code for occupation capacity, which I find quite ironic.

This year's festival had air conditioning, which is a big step up, but it is a shame that they lost the novelty of the fire station, because that aesthetic sounds pretty unique. This year, they screened five short films, all from members of the Cabot community. Williams claims that the purpose of the film festival is to "build community through art" by focusing on local artists. The first short of the evening -- "Sniffy Goes to the Movies" -- was a surprisingly traditional stop motion film created by teenager Thomas Williams. This micro short used well over 1,000 individual pictures of Legos to depict a Buster Keaton-esque narrative of a Lego character trying to get to the cinema.

Up next was "Bloodlines," directed by Charlie Brady. This was a 48 Hour Film Project short from last year starring Carmen Patterson and local character actor Mike Brabender in a quiet Western about two people with family secrets. It was the most cinematic-looking film of the night and it deservingly won best picture at the end of the festival. This was followed by Matthew Dyson's short "Animal Crackers," a kid-friendly comedy about a young girl snacking on some animal shaped crackers that turns her voice into a jungle. Next was "I Want Your Beans," a chaotic one-person production directed, shot, acted, and edited by teenager Abigale Williams. (All three Williamses are related.) As far as plots about a thief who steals cans of beans goes, this short had the entire audience laughing. But I was paying more attention to the fact that the way this short was shot showed that Abigale has really good potential as a filmmaker if she sticks with the craft.

Ending the night was a documentary shot by an entire fourth-grade class, "#Wheezy." This documentary focused on their fellow classmate Eloise Ann Owen, a young girl who was born with Hypoplastic Left Heart Syndrome, or in other words, she only had half a heart. The girl, nicknamed Wheezy, passed away a few years ago, and this fourth-grade class does an admirable job memorializing her. The whole festival of shorts lasted a little over an hour with little bronze firemen bobble heads given out as awards.

I've been to a lot of film festivals in this state, big and small. And at every festival there has always been an air of cynicism as filmmakers can always find something to complain about whether it be about the venue, the projectors, or the staff. Filmmakers even have the tendency of being overly competitive about awards. (Truth be told, I have been guilty of this in the past.)

But there was something special about everyone's attitude at the Firehouse Film Festival. Even though the films might not have been perfect, seeing an entire community coming together to praise and encourage young artists and their passions warms the cockles of my heart. I'd sum this festival up as being a wholesome experience. And in this day and age, wholesomeness is hard to come by.