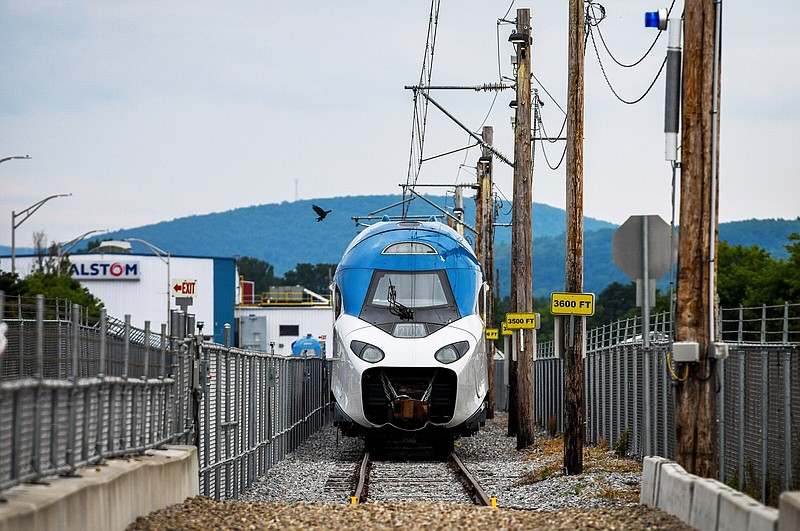 An Amtrak Acela power car and train sit on a test track at the Alstom production facility in Hornell, N.Y., in this file photo. (The Washington Post)

America's passenger railroad plans to achieve net-zero greenhouse gas emissions by 2045, Amtrak says, joining a growing list of transportation carriers and agencies that have made commitments to reduce their carbon footprints.

Amtrak said it also plans to reduce diesel fuel usage through improved technology and use carbon-free electricity by 2030. The carrier, which operates more than 300 trains serving more than 500 destinations daily, said it will invest in research in collaboration with states and experts to advance innovations in fuel cells, hydrogen, batteries and other zero-emission technologies.

"Not only are trains convenient and comfortable, they are also one of the most sustainable modes of transportation," Amtrak chief executive Stephen Gardner said in a statement. "With new equipment, modernized stations and net zero emissions, Amtrak can lead the drive toward sustainable transportation throughout the nation."

Domestic airlines have also recently announced measures to reduce their contributions to greenhouse gases and climate change, setting goals to bring emissions to net-zero within 30 years.

The transportation sector is the largest contributor of U.S. greenhouse gas emissions, accounting for about 27% in 2020, according to the Environmental Protection Agency. Most comes from burning fossil fuel for cars, trucks, ships, trains and planes. Rail contributes about 2% of the transportation-related greenhouse gas emissions, lower than aircraft (8%), trucks (27%) and personal cars (57%), according to EPA data.

"We congratulate Amtrak for this ambitious commitment to further reduce its carbon footprint, cementing its place as a leader in the clean transportation revolution," Transportation Secretary Pete Buttigieg said in a statement.

Amtrak is purchasing more fuel- and energy-efficient fleets, including dual-power locomotives that will run on electricity where possible, and hybrid train sets that can operate on battery power. The carrier last year announced a $7.3 billion plan to replace nearly 40% of its rail car fleet by 2031, including taking the oldest cars in Amtrak's fleet out of service.

The railroad's plans include replacing 30-year-old diesel power cars with more efficient cars that it says emit nearly 90% less of the pollutant nitrogen oxide. The Acela fleet set to enter service next fall will carry 25% more passengers and will be 20% more energy efficient.

Funding from last year's infrastructure law, which allocated $66 billion to rail, will help Amtrak in the effort, the railroad said.