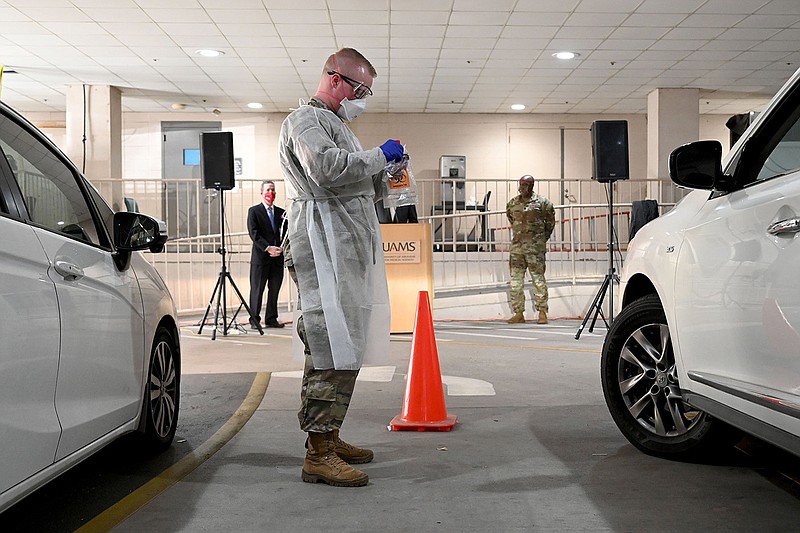 The number of people hospitalized with covid-19 in Arkansas fell for the third day in a row Friday as the state's count of cases rose by 446 -- the smallest daily increase on a Friday in almost four months.

Growing by double-digits for the fourth consecutive day, however, the state's death toll from the virus, as tracked by the state Department of Health, rose by 17, to 12,063.

Health Department spokeswoman Danyelle McNeill said eight of the deaths reported Friday happened within the past month, and the others were from early August.

Including the deaths reported Friday, a total of 80 deaths had been reported in the past week, the most over a seven-day span since the week ending March 29.

"I think we are still feeling the effects of this summer's surge," State Epidemiologist Mike Cima said in an emailed statement.

"While the number of deaths from this peak are far lower than previous peaks, it is a reminder that when we see increased cases and hospitalizations, it's fair to expect some increase in deaths to follow."

The number hospitalized, on the decline since it reached 296 on Tuesday, fell Friday by 14, to 272.

The number as of Friday was still up by seven compared with its level a week earlier, however, and by 14 from the two-month low it hit early last week.

The increase in cases was smaller by 329 than the rise on Thursday and by 214 than the one the previous Friday.

It was the smallest daily increase on a Friday since May 27.

"I think it's reflective of a downward trend that we have been seeing of late," Cima said.

He said he was glad to see the number of hospitalized patients drop, adding it "wasn't unexpected given what we have seen with our cases and test positivity."

He said he expects the number hospitalized and the state's new-case numbers to keep falling "for the time being."

Already at its lowest level since the week ending June 7, the average daily increase in the state's case count over a rolling seven-day period fell Friday to 534.

With recoveries outpacing new cases, the number of cases in the state that were considered active fell by 367, to 6,981. It was the first time the number had been below 7,000 since June 13.

After not changing a day earlier, the number of the state's virus patients who were in intensive care rose Friday by one, to 49.

The number on ventilators, which fell by three on Thursday, rose Friday by two, to 21.

At its hospitals in Little Rock and Springdale, Arkansas Children's had seven covid-19 patients on Friday, down from eight on Thursday and 14 the previous Friday, spokeswoman Hilary DeMillo said.

Also on Friday, McNeill, the Health Department spokeswoman, said information posted in a federal data system indicates that Arkansas will be able to "pre-order" up to 18,100 doses of a revamped Pfizer vaccine for children age 5-11 in advance of the vaccines' authorization for that age group.

The U.S. Food and Drug Administration on Aug. 31 authorized the vaccine for people 12 and older and a similarly updated Moderna vaccine for those 18 and older.

Both revamped vaccines, which were cleared for use as boosters for people whose last vaccine was at least two months ago, target the original coronavirus strain as well as two versions of the omicron variant that are now responsible for most infections.

Updated vaccines have not yet been authorized for children younger than 12, but Dr. Peter Marks, director of the FDA's Center for Biologics Evaluation and Research, said Tuesday that he expects them to be cleared for children 5-11 within "a matter of weeks," according to ABC News.

According to a planning document, dated Tuesday and posted on the U.S. Centers for Disease Control and Prevention's website, states are expected to be able to start placing pre-orders for the Pfizer vaccine for children age 5-11 on Monday.

The pre-orders are expected to continue until Oct. 5, the CDC said in the document. The doses would be shipped following authorization of the vaccine for the new age group by the FDA.

Moderna boosters for children age 6-17 would come from the same vials that are now being used for adults, with the dosage reduced for those under age 12, so pre-orders for that vaccine aren't necessary, according to the CDC document.

Providers wouldn't be able to start administering the updated boosters to the new age groups until the issuance of authorizations by the FDA and recommendations by the CDC.

Following such FDA authorizations, the CDC said it expects to issue its recommendations in "early to mid-October."

Meanwhile, some Arkansas pharmacies on Friday were able to replenish their supply of the updated Moderna vaccine now in use for adults for the first time in weeks, John Vinson, chief executive of the Arkansas Pharmacists Association, said.

Through the vaccination program coordinated by the state, Arkansas received an initial supply of 21,500 doses of Moderna and 24,900 doses of Pfizer vaccine earlier this month.

Since then, the state has continued to order and receive tens of thousands of additional doses of Pfizer, but it hadn't been able to order more Moderna until this week.

McNeill said the state placed a new Moderna order on Thursday, resulting in the delivery of 19,600 more doses as of Friday.

Kavanaugh Pharmacy, which serves as a vaccine distribution hub for other providers, received a shipment of 2,000 doses of the updated Moderna vaccine on Friday, co-owner Scott Pace said.

It was the first shipment the Little Rock store had received since it received an initial supply of 2,000 doses on Sept. 2, he said.

About a third of the doses from the latest shipment had already been redistributed to other pharmacies as of Friday afternoon.

"We were down to like our last two vials at my pharmacy, but I know that everybody else had pretty much gotten to the end of their supply, as well," Pace said.

While the updated Pfizer vaccine had remained plentiful, Vinson said some pharmacies prefer Moderna because it's easier to store and many of their customers received Moderna in the past.

"There's a significant number of patients that want to stick with whatever they started with," Vinson said.

The Washington Post reported this week that the federal government was releasing more than 10 million Moderna doses that had been held back due to concerns identified during an inspection at an Indiana packaging plant.

The FDA authorized the doses for distribution after concluding that they "met all applicable specifications," an agency spokesman said in a statement to the Post, adding that the FDA had "no concerns with the safety, effectiveness or quality of these batches."

The FDA found no safety issues at a second plant that is also helping to finish Moderna vaccines for U.S. distribution, the Post reported.

Providers had reported administering the updated Pfizer and Moderna boosters to 31,329 Arkansans as of Thursday, McNeill said.