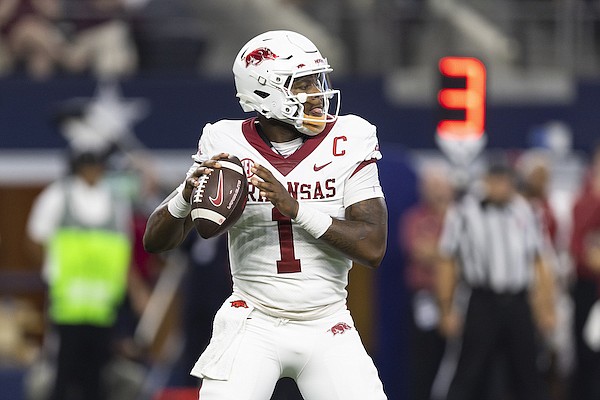 Arkansas quarterback KJ Jefferson (1) looks for an open receiver during the first half of the team's NCAA college football game against Texas A&M on Saturday, Sept. 24, 2022, in Arlington, Texas. (AP Photo/Brandon Wade)

Arkansas kicker Cam Little missed a 42-yard field goal attempt off the right upright with 1:30 remaining. The Razorbacks had driven to the Aggies’ 16, but a bad snap from center Ricky Stromberg to quarterback KJ Jefferson resulted in a loss of nine yards on second down.

Jefferson ran for 1 yard to the Texas A&M 24 on a third-and-14. That created a long attempt off the left hashmark for Little, whose attempt bounced off the top of the upright.

Texas A&M (3-1, 1-0 SEC) won the Southwest Classic for the 10th time in 11 seasons with an all-too-familiar comeback. It was the third time since 2014 that Arkansas blew a 14-point lead to the Aggies inside the home of the Dallas Cowboys.

With the Razorbacks leading 14-7, the game turned when Jefferson fumbled trying to dive into the end zone from around the 4-yard line on a first-and-goal play late in the second quarter. Tyreek Chappell recovered the fumble and returned it 15 yards before his teammate Demani Richardson took it away from him and ran 82 yards to complete a 97-yard touchdown return.

The extra-point attempt was botched and Arkansas led 14-13 at halftime.

Texas A&M took a 20-14 when Devon Achane ran for a 9-yard touchdown to cap a 6-play, 70-yard drive on the Aggies' first second-half possession. Randy Bond connected on a 31-yard field goal late in the third quarter to extend the Aggies’ lead to 23-14.

Bond missed a 53-yard field goal with 6:30 remaining to give the Razorbacks possession at their own 36. Jefferson had a 19-yard pass to Matt Landers before consecutive runs of 10 yards by Raheim Sanders and Jefferson to quickly put Arkansas near the red zone.

Jefferson was sharp early as the Razorbacks built a 14-0 lead. He had first-quarter touchdown passes for 32 yards to Ketron Jackson and 56 yards to Warren Thompson.

Achane broke a 61-yard run deep into Arkansas territory to set up the Aggies’ first touchdown, a 10-yard touchdown reception by Evan Stewart on a third-down pass from Max Johnson under duress.

Achane led the Aggies with 19 carries for 159 yards.

Jefferson completed 12 of 19 passes for 171 yards, rushed 18 times for 105 yards and accounted for all of Arkansas’ touchdowns.

The Aggies held Sanders to 68 yards on 17 carries. Sanders had rushed for over 100 yards in each of the Razorbacks’ first three games.

Arkansas is scheduled to host No. 2 Alabama next Saturday at 2:30 p.m. in Fayetteville.