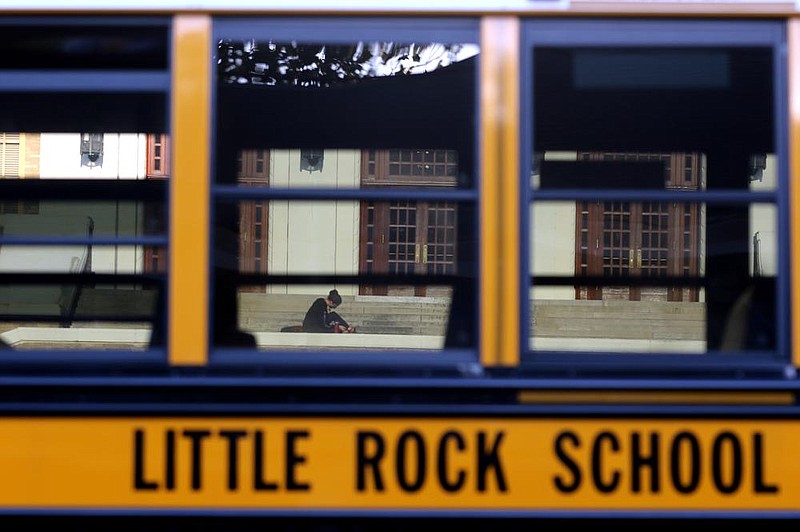 A school bus passes as students head into the building for the first day of school at Little Rock Central High School on Monday, Aug. 24, 2020. (Arkansas Democrat-Gazette/Thomas Metthe)

Little Rock School Board members in a series of hard-fought votes late Thursday established parameters for their individual visits to school campuses.

The newly approved policy -- offered by School Board President Greg Adams and ultimately adopted in a 4-3 vote -- was the strictest of three options considered by the board and the only one that carries consequences for violating the policy.

"A school board member who is on a school campus outside the guidelines ... will be considered an unauthorized visitor and asked to leave the campus," the newly approved policy concludes.

The policy cites the legal responsibility of a board member to visit schools while students are in attendance and states that the obligation may be met in one of several listed ways:

• Participating in a scheduled school tour.

• Attending events open to members of the public such as athletic competitions.

• Serving as a volunteer in coordination with the school's administration.

• Meeting with the superintendent or designee.

• Attending to official school board or strict-related business.

• Relating to a board member's own child in the school.

"With the exception of being on campus related to a valid reason as parent of a student in a district school and attendance of events open to members of the public, school board members will inform or consult with the superintendent before visiting a school or district building," the new policy states.

"When visiting a school, a school board member will follow guidelines and procedures required of other visitors such as signing in, checking in with the administrative office, and utilizing doors designated for visitors," it also says.

Board members Vicki Hatter and Ali Noland had also proposed draft policies. Both were defeated by the board before the approval of the Adams proposal. Voting for the Adams policy were Adams, Evelyn Callaway, Michael Mason and Norma Johnson.

Hatter's proposal repeated the language of Arkansas Code Annotated 6-13-620 that lists the duties of a school board member. The listed duties, in part, direct that board members "Visit district schools and classrooms when students are present no less than annually and attend some events and functions."

Noland said her proposal was a balance between the Adams and Hatter proposals. Noland said she agreed that the board needs established boundaries for making visits to schools and fulfilling general oversight responsibilities, but she called the Adams proposal "too restrictive."

Hatter called the Adams and Noland proposals reactionary responses to "unsubstantiated" complaints. She said state law calling for school board members to have oversight of schools can't be trumped by district policy.

"You are pushing fear," Hatter told her board colleagues at one point in the debate, adding that most principals are excited to have school board members visit their campuses.

Callaway, a retired teacher, told her colleagues that when she taught, she welcomed expected visitors but would find it disruptive if people were knocking at her door or looking into her classroom windows.

The debate over rules for board member visits to campuses stemmed from several complaints made last spring by Parkview Magnet High School Principal Philicia Bell about Hatter. Bell said in part that Hatter failed to enter the school's front doors when she visited the campus where Hatter's daughter was a student, and that Hatter entered classrooms and teacher work areas without permission.

The principal's complaints --which also included allegations that Hatter was trying to get her fired, had pressured Bell to enroll two students at Parkview without going through the audition process and interfered with the student council's planning of the prom -- resulted in a $46,000 investigation by out-of-state attorneys and board consideration of censuring Hatter.

Investigators found that Hatter had acted inappropriately on some matters but did not violate policy or state law regarding her school visits. The board stopped short of censuring Hatter but voted to re-commit themselves to revising and following policy on school visits.

The Noland proposal listed the conditions for a school visit:

• The board member must provide the superintendent advance notice of the visit.

• The board member must abide by all generally applicable rules governing school visitation by the public, including signing in at the front office, wearing a visitor's badge, using approved entrances and exits and following the directives of campus security or school resource officers.

"While visiting a school campus, a board member may not engage in behavior that jeopardizes school safety, disrupts student learning or interferes with an employee's ability to perform his or her job," the policy draft said. "A board member is not permitted to harass, threaten, berate, abuse or intimidate students, parents, district employees or volunteers."

The Noland draft concluded by saying that an individual board member lacks the authority to interfere with daily operations and is prohibited from making demands of students or staff. Board member concerns should immediately be communicated to the superintendent to be resolved, it said.