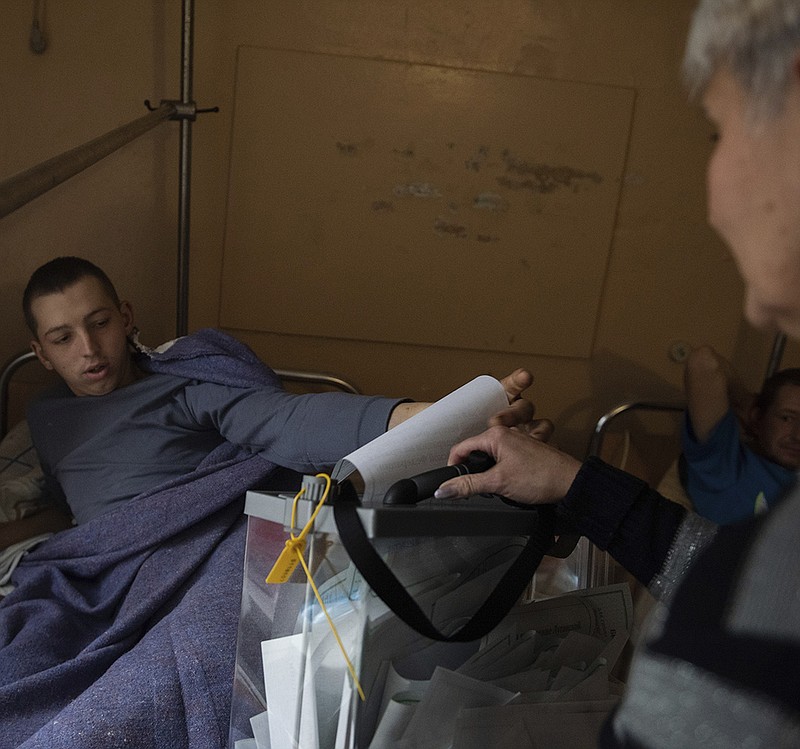 A wounded Luhansk People’s Republic serviceman votes Friday in a hospital in Luhansk in eastern Ukraine in a sector controlled by Russian-backed separatists. More photos at arkansasonline.com/ukrainemonth7/. (AP)

KHARKIV, Ukraine -- Kremlin proxy authorities in occupied, war-torn Ukraine declared Friday that voting had begun in staged referendums and Moscow's desired outcome -- a claim of public support for the annexation of Ukrainian territory -- was assured.

The purported referendums, which are being orchestrated in parts of the Donetsk, Luhansk, Kherson and Zaporizhzhia regions of eastern and southeastern Ukraine that are controlled by the Russian military, are illegal under Ukrainian and international law and, in any case, would not remotely meet basic democratic standards for free and fair elections.

Western leaders, including President Joe Biden, have denounced the process as a "sham" to prepare the ground for Russia's theft of Ukrainian land.

The Kremlin's proxy leaders, however, exulted in the process.

"The holding of the referendum is a historic milestone," Denis Pushilin, leader of the self-declared Donetsk People's Republic, said Friday in a video address. "First, we became an independent state, then we achieved the recognition of the republic, and here it is, the third step -- unification with Russia."

The balloting exercise reprises Moscow's decades-old tactic of staging votes in neighboring nations, then insisting it followed the law when it invaded and occupied their territory.

But in its rush to lay the groundwork for annexation, Moscow has broken even its own prior standard that such votes should be held only after Russia has full military control, reflecting President Vladimir Putin's concern that his troops face a real risk of defeat.

"The actions of the parliament and the president of Russia will follow," Peskov told reporters. "The documents will be signed. Everything will be prompt."

Former Russian President Dmitry Medvedev said Thursday that the outcome of the votes was a foregone conclusion and that Russia would defend the newly acquired territories, potentially by using nuclear weapons.

Such declarations pose risks for Moscow, which already faces stiff resistance from local residents in the partially occupied regions, and from Kyiv. Ukrainian President Volodymyr Zelenskyy has pledged to reclaim all occupied territory, including Crimea, which Russia invaded and annexed illegally in 2014.

For residents, it was not entirely clear how the "voting" would be carried out.

In the town of Starobilsk, located in the Luhansk region and occupied since March, one man said some voting booths had been set up at a government building but that people had received little information about how the staged referendum would take place.

In other occupied areas, videos emerged of election officials knocking on doors to pressure people to vote, accompanied by Russian soldiers.

"No self-respecting person will open the door for them," the man in Starobilsk told The Washington Post, speaking on condition of anonymity for fear of reprisals.

"I was talking to one guy who said he'd stay out of the house for the next week to avoid being forced to vote," the man said. "I said it might be better to lock yourself in."

Still, sympathies in Starobilsk are divided, as they have been since Russia began fomenting an armed separatist uprising in 2014 in response to Ukraine's pro-European Maidan revolution.

While some residents have become partisans, sneaking out at night to tear down Russian flags and replace them with Ukrainian ones, others have marked their cars with a "Z" -- the symbol of Russia's invasion.

The man said that attempts to dodge taking part in a referendum he considers bogus could result in neighbors informing on him to the local authorities installed by Moscow.

Potentially scarier, the man said, is what may come after the vote. No one doubts that the announced result will be in favor of joining Russia, but after that, he fears that he and other men in occupied Ukraine could be mobilized to fight for Russia and against their own countrymen.

The authorities said "voting" would occur from Friday until Tuesday but would be held at local polling stations only Tuesday. On the other days, they said in a statement, "residents will be able to vote for the future of the Republic in places specially organized ... in the adjacent territories, public areas and other places suitable for voting equipment."

They described a process by which residents 18 years and older with acceptable identification documents could essentially request to vote anywhere, even if they are not listed on registration rolls.

But in one sign of the pretense of the exercise, the authorities warned that "repeated voting is prohibited" and anyone caught could be fined the equivalent of about $50 -- acknowledgment that the Russian currency has already been adopted in the territory -- or imprisoned for up to three years.

The Kremlin has taken a raft of other steps to coerce the regions into joining Russia: replacing Ukrainian news with Russian propaganda channels, forcing people to acquire Russian passports to get social benefits and imposing Russia's education curriculum to teach Ukrainian children that their country is not a sovereign nation but part of the "Russian world."

Some pro-Russian officials in occupied Ukraine had urged pushing ahead with the staged votes regardless of Russia's lack of control over the regions, noting that the results would never be accepted by the international community. World leaders have condemned the process in blunt terms.

In a statement Friday, the Group of Seven leaders condemned "the sham referenda that Russia attempts to use to create a phony pretext for changing the status of Ukrainian sovereign territory, which is subject to an ongoing Russian aggression."

"These actions clearly breach the United Nations Charter and international law and go diametrically against the rule of law among nations," the statement read.

In a video aired by Russian state propagandist Vladimir Solovyov, officials watched as residents of the Donetsk region marked ballots in the hallway of an apartment block.

Ivan Fedorov, the Ukrainian mayor of Melitopol, a city under Russian control in the southern Zaporizhzhia region, said the occupation authorities would perform a "fake referendum" and that people who would normally work in the city's voting commission were "refusing to work on this en masse."

Fedorov was believed to have been abducted by Russian forces in March before he was freed in what Ukrainian officials called a "special operation." Like many democratically elected officials from occupied areas, he is governing from outside Melitopol but is still in contact with many people living there.

The puppet authorities backed by Moscow "don't even plan to go door-to-door" canvassing residents, Fedorov said. "For show, they'll knock on a few doors and take some pictures to show they're asking people what they think, but in reality, there won't even be that."

"Of course, people are scared," Fedorov said, "because they understand that this is happening for several reasons, including mobilization."

Fedorov has advised people to leave the occupied area any way possible. He has been told that men 18 to 35 years old are no longer being allowed through the checkpoints out, so he has suggested citizens try to get out via Crimea, and then flee abroad.

A similar staged referendum would have occurred in the northeast Kharkiv region if not for the recent Ukrainian counteroffensive that forced Russian troops to retreat.

In the recently liberated city of Izium, the mayor's secretary, Kostiantyn Petrov, said he found the staged votes baffling.

"It's hard to understand Putin," Petrov said. "He thinks this referendum will legitimize occupation of these regions. He wants to show that people want to see Russians there. But such a vote under the threat of rifles cannot be legitimized by any civilized country."

Based on accounts of how Russian forces treated civilians in Izium, Petrov said, he expected similar tactics during the staged referendums in other regions.

"If you don't vote for Russia," he said, "maybe they will not give you aid."

Anton Chernyshov, 31, who survived the occupation of Izium, is now working as a volunteer distributing humanitarian aid to the large proportion of residents still struggling to find enough to eat. If a referendum had taken place in Izium, he said, most of the few people left would not have voted.

With the power still out and the cellphone network still unreliable, many residents were unaware of Putin's plans to stage referendums.

Luba, a 59-year-old woman, barged into the courtyard of a building housing temporary city offices, complaining Thursday about how little aid was reaching residents. She held up one bag of pasta, a can of beans and a can of meat, shouting that she was supposed to share the meager provisions among several families.

Luba said she had not heard any recent updates on the votes -- she was only focused on securing more food.

"I don't know anything," she said. "There is no electricity."

Information for this article was contributed by Sergii Mukaieliants of The Washington Post.