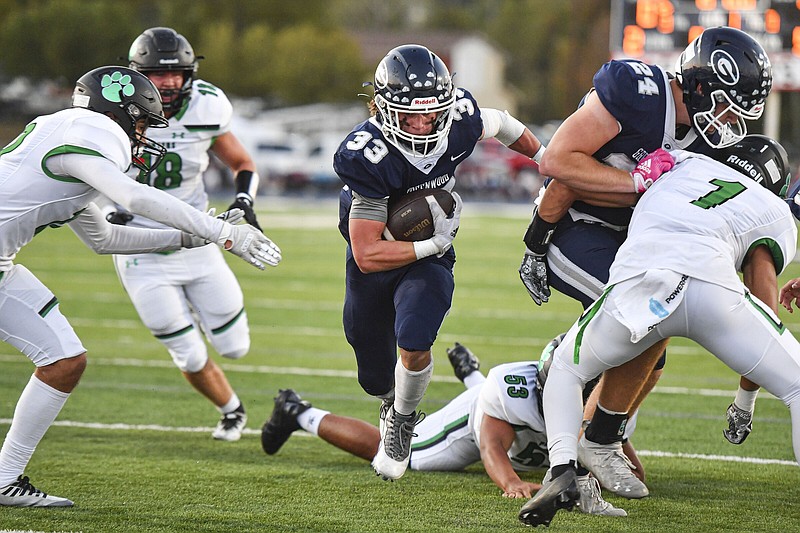 Greenwood running back Jake Glover scores a 4-yard touchdown in the first quarter of the Bulldogs’ 63-21 victory over Van Buren on Friday at Smith-Robinson Stadium in Greenwood. The Bulldogs scored on their final four possessions to post their second straight 60-point conference outing. More photos at arkansasonline.com/924vbghs/ (NWA Democrat-Gazette/Hank Layton)

GREENWOOD -- The Greenwood Bulldogs had good returns on their investment Friday night.

The Bulldogs used two touchdown returns within a two-minute span to turn the tide and romp to a 63-21 win over Van Buren at Smith-Robinson Stadium to cap homecoming festivities along with a 100-year celebration of football.

It took two returns, though, to turn away Van Buren and seize the momentum.

Tied at 21-21 late in the first half, Van Buren (1-3, 1-1) was looking to score when Greenwood senior linebacker Evan Williams snared an interception and returned it 90 yards for a touchdown with 1:35 left in the first half. Senior kicker Steven Duran's extra point put Greenwood up 28-21.

"That was huge," Greenwood Coach Chris Young said. "It was 21-21. We made the play, and it definitely turned the ballgame around."

Then Greenwood sophomore Grant Karnes returned the second-half kickoff 89 yards for a touchdown. Kane Archer turned a bad snap into two points with a pass to Tanner McKusker for a 36-21 lead.

"That was a big interception for a touchdown to end the half," Van Buren Coach Moe Henry said. "We're going in and trying to get some points. I felt like we were in field-goal range for at least an attempt to try to go in with the lead. It was just an unfortunate play. They got a pick-six to go into the half with the momentum. Then they come back in the second half and get more momentum with the kick return."

Greenwood rolled from there.

The Bulldogs scored on their final four possessions to post their second straight 60-point conference outing.

Senior quarterback Hunter Houston completed the next three series with touchdown passes of 42 yards to Isaiah Arrington, 18 yards to Karnes and to L.J. Robins, who darted and dashed on a 60-yard catch-and-run score.

Van Buren had the momentum most of the first half.

Junior quarterback Bryce Perkins guided the Pointers to a 7-0 lead on a six-play drive capped by a 29-yard scoring run by Cameron Keller.

Greenwood tied it on the next possession with Jake Glover's 4-yard touchdown run with 5:58 left in the quarter.

Van Buren punted on its next series, and Trenton Cooley recovered a fumble for Van Buren to end Greenwood's next series.

The Pointers turned that turnover into a 14-7 lead on a 12-yard touchdown pass from Perkins to Cooley three plays into the second quarter.

"It was good for us to face a little adversity," Young said. "I told the guys that. There's going to be a lot of ups and downs to the football season. It's not all going to be easy. We had a little adversity. They didn't point fingers. They just went and played, and I'm proud of them for that."

Greenwood tied it at 14-14 on a seven-play, 81-yard drive with Houston throwing a 23-yard touchdown pass to Karnes.

Van Buren answered quickly when Malachi Henry gathered up the ensuing kickoff at the 4, cut back across the field and sprinted up the Van Buren sideline for a 96-yard kickoff return for a 21-14 lead.

Greenwood again answered, needing just six plays to knot it at 21-21 on a 25-yard touchdown pass by Houston to across the middle of the end zone.

Van Buren took over with 6:49 left in the half, converted a third down and a fourth down to move methodically into position with a 10-play drive to possibly take the lead at the half before the interception and return.

Houston completed 15 of 17 passes for 302 yards with 5 touchdowns -- two touchdowns each to Karnes and Robins and one to Arrington. Karnes finished with seven catches for 124 yards, and Robins four for 101.