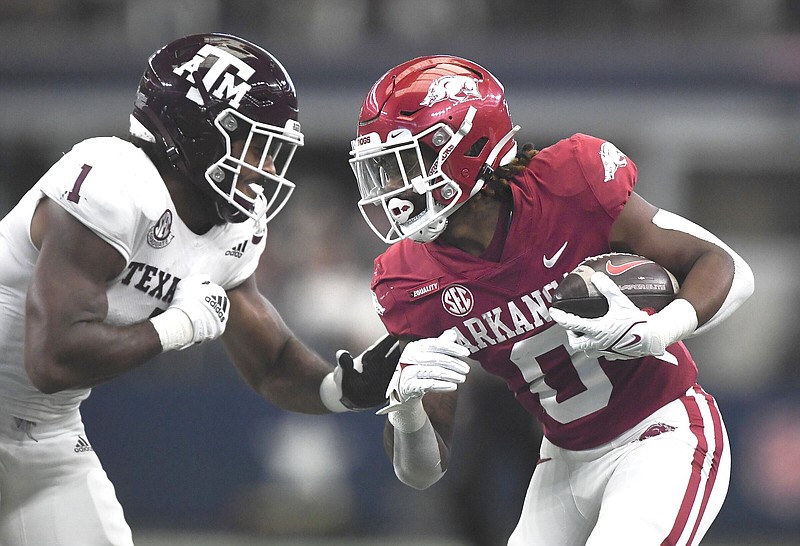 Arkansas running back AJ Green (right) runs for a touchdown as Texas A&M linebacker Aaron Hansford defends during last season;s game. The Razorbacks seek their second consecutive victory over the Aggies when the teams square off at 6 p.m. today at AT&T Stadium in Arlington, Texas. (NWA Democrat-Gazette/Charlie Kaijo)

ARLINGTON, Texas -- Just about every coach will repeat the age-old mantra that the next game is always the most important game on the schedule.

That's not always true, but have a look at today's Southwest Classic.

The saying never seemed more real than for today'a 6 p.m. game between the University of Arkansas and Texas A&M.

The Aggies also had a scare like that, but it didn't go as well as Appalachian State shocked them 17-14 two weeks ago in College Station, Texas.

Arkansas will play its second top 25 matchup of the season while aiming for its fifth trophy game win in a row under third-year Coach Sam Pittman.

Based on the roads ahead for both programs, today's game looms pivotal.

"So I think this game is very important because the SEC West, we're starting it. Not only because of that, because they're our true rivals. It's going to be a big, important game."

Pittman has played up the trophy games, going so far as to take a picture with the four the Razorback won last year, plus Larry the bowling ball, while sitting on a throne. The picture is on the back inside cover of the Arkansas media guide.

"I think it's a big rivalry for us," Pittman said. "I think any time you've lost nine of the last 10 games ... it means a lot to Arkansas because we haven't been on the winning end of it.

"It's a big deal for us to win any of those trophy games. It's a huge deal. We've gotten the trophy out this week and things of that nature. Obviously, we've got to take it down there. We certainly want to bring it back. It means something to us."

"This game right here is going to start SEC play in the West, man," Paul said. "This is one of our top opponents other than Alabama. But we don't worry about teams we're playing next. We just take it week by week.

"So with Texas A&M, a powerhouse team like that that's been doing a great job, we just have to keep our minds on track, stay in our playbooks, study the film even harder than what we've been doing the past three weeks."

The Razorbacks have one edge on the Aggies in that they have already opened SEC play with a 44-30 win over South Carolina in Week 2, while A&M will be playing its league opener.

"It's your first conference game and you want to get off to a good start in your own conference," Texas A&M Coach Jimbo Fisher said. "It's a hard road to hoe for everyone. That's the SEC West. It's tough each week.

"It's another critical game. But it's one game. That's what it is, but it's a very important game because it's the next one and you'd rather be on the top side of it than the bottom, I promise you, with what's coming."

What's coming for both teams is an absolute grind. Neither team has left its own campus through three weeks.

Arkansas will follow the Southwest Classic with a home visit from preseason No. 1 Alabama, which has beaten the Hogs 15 straight years. After that, road trips to Mississippi State and BYU are on tap, then another road game at Auburn after an open date.

Texas A&M will hardly be home in October. The Aggies travel to face Mississippi State, Alabama and South Carolina in order before their next home game on Oct. 29 against Ole Miss.

"It's definitely different," Texas A&M receiver Ainias Smith said. "Starting SEC play, it's nothing to play around with. The competition is going to be there every week. Practice is going to be tough every week. So we've just got to lock in and play our hearts out."

Arkansas celebrated a huge breakthrough in the series with a 20-10 win last year, snapping a nine-game losing streak in the series that included several heartbreaking losses, three of them in overtime in the last decade.

The upset of the No. 6 Aggies paid dividends for the Razorbacks, sending them into the top 10 at No. 8 for the first time in nearly a decade, and opening up better recruiting opportunities in Texas.

"I think in recruiting, it's a lot about confidence," Pittman said. "Last year we were fortunate, and we beat Texas and then beat Texas A&M.

"I think our confidence in going into the state of Texas and saying 'OK, this is what we did.' I think it helped us in recruiting that way."

Pittman summarized the recruiting pitch their coaches could use: "We're going, 'We've had a couple of wins in the state,' and you're confident going in there and going, 'Why not us? Give us an opportunity. You'll like it if you get on campus.' So, I think it definitely helped us as a staff in recruiting, and I'm hoping that it helped the kids look at us in a different light."

The teams feature contrasting trends on both sides of the ball.

Arkansas put up 597 total yards last week and averages 500.3 yards to rank third in the SEC and 18th in the country. The Hogs are 39th in scoring with 37.7 points per game.

Behind a veteran offensive line, Arkansas ranks 10th in FBS rushing with 243.7 yards per game, and sophomore tailback Raheim Sanders is third with 146.7 rushing yards.

Texas A&M has struggled offensively and already switched quarterbacks, from Haynes King to LSU transfer Max Johnson, the left-hander who helped guide the Aggies to a 17-9 win over No. 13 Miami last week. 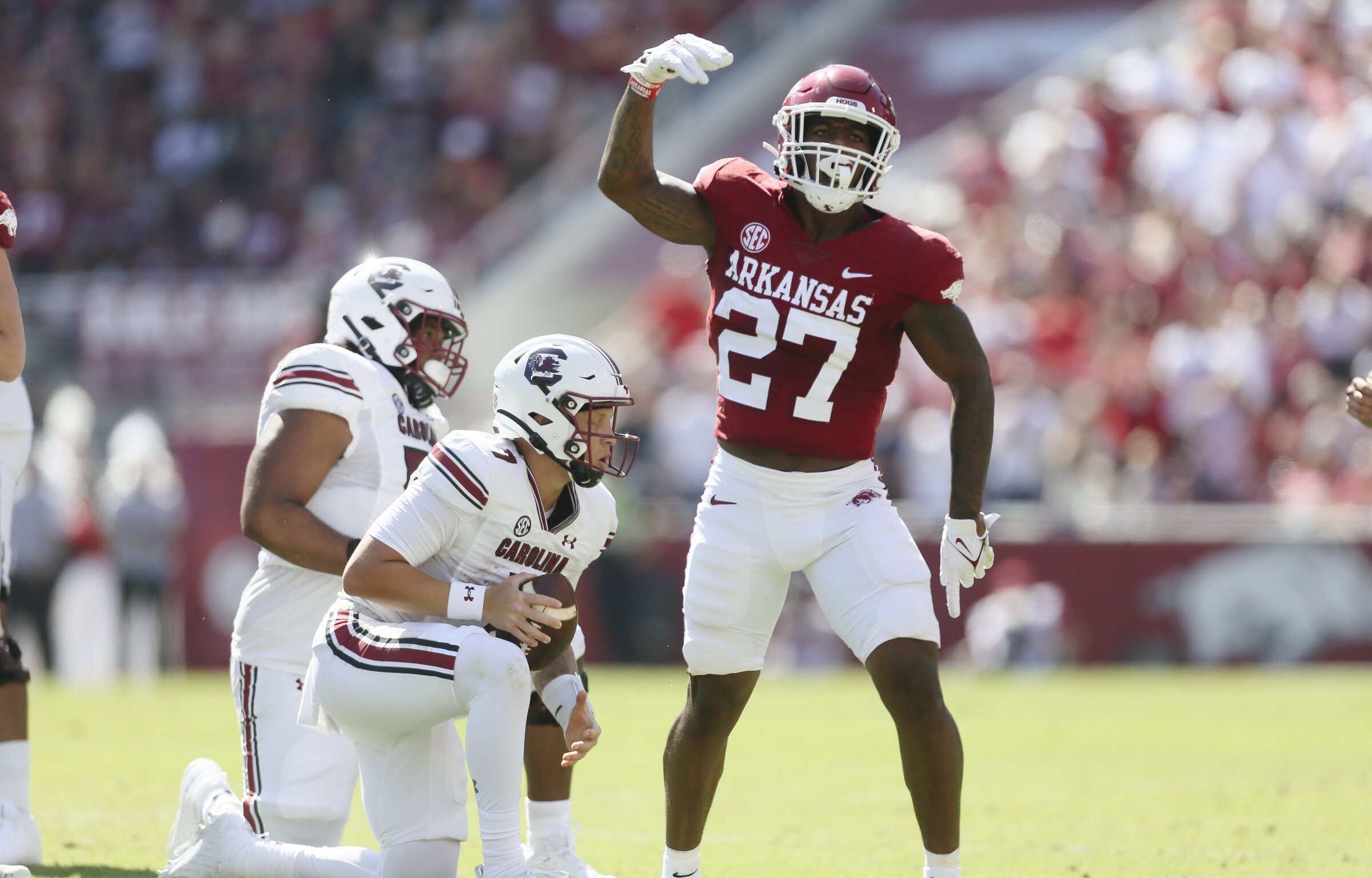