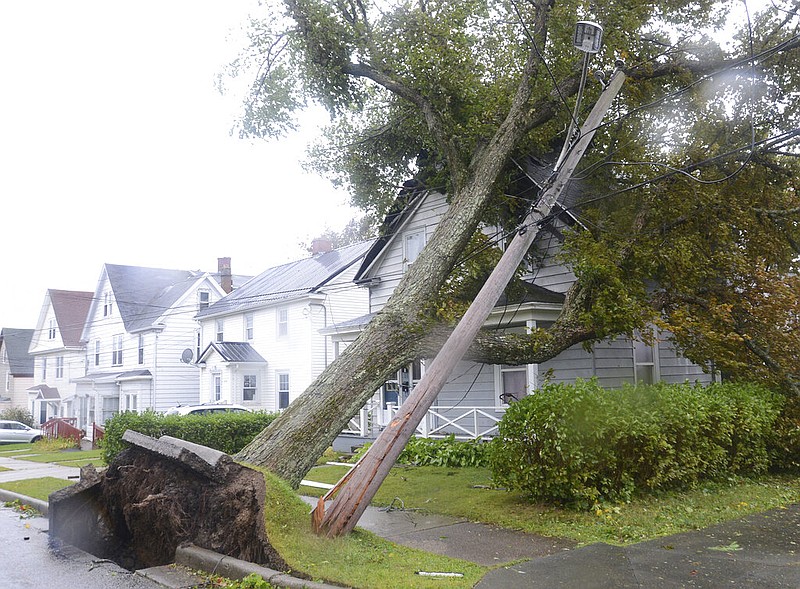 Fallen trees lean against a house in Sydney, N.S. as post tropical storm Fiona continues to batter the Maritimes on Saturday, Sept. 24, 2022. (Vaughan Merchant /The Canadian Press via AP)

TORONTO — Hundreds of thousands of people in Atlantic Canada remained without power Sunday and officials tried to assess the scope of devastation of from former Hurricane Fiona, which swept away houses, stripped off roofs and knocked out power across the country's Atlantic provinces.

Defense Minister Anita Anand said Canadian troops would help remove fallen trees throughout Eastern Canada, restore transportation links and do whatever else is required for as long as it takes. She didn't specify how many troops would be deployed.

Fiona was blamed for at least five deaths in the Caribbean, and while there were no confirmed fatalities in Canada, authorities on Sunday were searching for a woman missing in the hardest hit town of Channel-Port Aux Basques on the southern coast of Newfoundland.

"She's likely washed out to sea but we haven't been able to confirm that," said Cpl. Jolene Garland, a spokeswoman for the Royal Canadian Mounted Police.

As of Sunday morning, more than 256,000 Nova Scotia Power customers and over 82,000 Maritime Electric customers in the province of Prince Edward Island — about 95% of the total — remained in the dark. So were more than 20,600 homes and businesses in New Brunswick.

More than 415,000 Nova Scotia Power customers — about 80% in the province of almost 1 million people — had been affected by outages Saturday.

Utility companies say it could be days before the lights are back on for everyone.

Cape Breton Regional Municipality Mayor Amanda McDougall said Sunday over 200 people had been displaced and were in temporary shelters. Over 70 roads are completely inaccessible in her region, which declared a state of emergency. She said she couldn't count the number of homes damaged in her own neighborhood.

She said it was critical for the military to arrive and help clear debris, noting that the road to the airport is inaccessible and the tower has significant damage.

McDougall said it is amazing there are no injuries.

"People listened to the warnings and did what they were supposed to do and this was the result," she said

Prince Edward Island Premier Dennis King said few communities were spared damage, with the devastation seemingly beyond anything before seen in the province.

"Thankfully the weather is a lot better on the outside this morning which will give us opportunities to have a look and assess the damage," Mayor Brian Button said on social media.

"This is not a one-day situation where we can all go back to normal. Unfortunately, this is going to take days, it could take weeks, it could take months in some cases."

Much of the town of 4,000 had been evacuated and Button said officials on Sunday will identify areas where people can safely go back to their homes. He asked for patience, noting some residents are showing up at barricades angry and wanting to go to home.

Government officials across Eastern Canada were assessing the full scope of damage caused by the storm now that the fierce winds have subsided in most places. Fiona had moved inland over southeastern Quebec.

"There are people who see their houses destroyed, people who are very worried. We will be there for you," Trudeau added.

Mike Savage, mayor of Halifax, said the roof of an apartment building collapsed in Nova Scotia's biggest city and officials had moved 100 people to an evacuation center. He said no one was seriously hurt.

The Canadian Hurricane Centre tweeted that Fiona had the lowest pressure — a key sign of storm strength — ever recorded for a storm making landfall in Canada.

He said more resilient infrastructure is needed to withstand extreme weather events, saying that what was once a 1-in-100 year storm might now arrive every few years because of climate change.

Peter MacKay, a former foreign and defense minister who lives in Nova Scotia, said he had never seen anything to match Fiona, with winds raging through the night and into the afternoon.

"We had put everything we could out of harm's way, but the house got hammered pretty hard. Lost lots of shingles, heavy water damage in ceilings, walls, our deck is destroyed. A garage that I was building blew away," MacKay said in an email to The Associated Press.