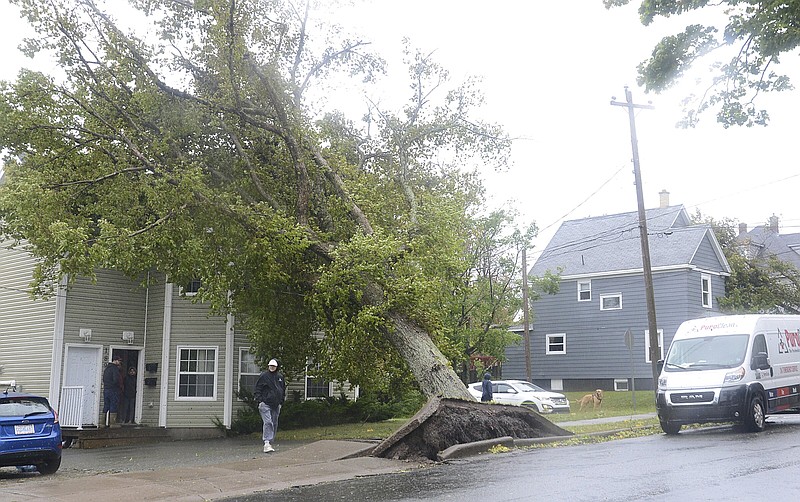 Pedestrians survey the damage in Sydney, N.S. as post tropical storm Fiona continues to batter the Maritimes on Saturday, Sept. 24, 2022. Strong rains and winds lashed the Atlantic Canada region as Fiona closed in early Saturday as a big, powerful post-tropical cyclone, and Canadian forecasters warned it could be one of the most severe storms in the country's history.(Vaughan Merchant /The Canadian Press via AP)

TORONTO -- Fiona washed houses into the sea, tore the roofs off others and knocked out power to the vast majority of two Canadian provinces as it made landfall before dawn Saturday as a big, powerful post-tropical cyclone.

Fiona transformed from a hurricane into a post-tropical storm late Friday, but it still had hurricane-strength winds and brought drenching rains and huge waves. There was no confirmation of fatalities or injuries.

Ocean waves pounded the town of Channel-Port Aux Basques on the southern coast of Newfoundland, where entire structures were washed into the sea. Mayor Brian Button said Saturday over social media that people were being evacuated to high ground as winds knocked down power lines.

Jolene Garland, a spokeswoman for the Royal Canadian Mounted Police in Newfoundland and Labrador, said a woman was safe and in "good health" after being "tossed into the water as her home collapsed" in the Channel-Port Aux Basques area. Garland said an individual who might have been swept away was still reported as missing and that high winds were preventing an aerial search.

The Royal Canadian Mounted Police said the town of 4,000 people was in a state of emergency as authorities dealt with multiple electrical fires and residential flooding.

"There are people who see their houses destroyed, people who are very worried -- we will be there for you," Trudeau said.

Halifax Mayor Mike Savage said the roof of an apartment building collapsed and they moved 100 people to an evacuation center. He said no one was seriously hurt or killed.

Provincial officials said there are other apartment buildings that are also significantly damaged. Halifax has about 160 people displaced from two apartments, officials said.

More than 415,000 Nova Scotia Power customers -- about 80% of the province of almost 1 million -- were affected by failures Saturday morning. Over 82,000 customers in the province of Prince Edward Island, about 95%, were also without power, while NB Power in New Brunswick reported 44,329 were without electricity.

Trudeau said Saturday more resilient infrastructure is needed to be able withstand extreme weather events, saying a one in a 100 year storm might start to hit every few years because of climate change.

A state of local emergency was also declared by the mayor and council of the Cape Breton Regional Municipality.

"There is a huge amount of debris in the roadways," Amanda McDougall, mayor of Cape Breton Regional Municipality, told The Associated Press. "There is a lot of damage to belongings and structures but no injuries to people as of this point."

Nova Scotia Premier Tim Houston said roads were washed out, including his own, and said an "incredible" amount of trees were down.

"The sad reality is the people who need information are unable to hear it. Their phones are not working. They don't have power or access to the internet," Houston said.

"In many areas, weather conditions are still too dangerous for our crews to get up in our bucket trucks," Gregg said. He said about 380,000 customers remain without power as of Saturday afternoon.

Prince Edward Island Premier Dennis King said they had no reports of any significant injuries or deaths. But he said few communities were spared damage, with the devastation looking to be beyond anything they had seen previously in the province. He said over 95% of islanders remained without power.

Federal Minister of Emergency Preparedness Bill Blair said there was very extensive damage at the airport in Sydney, Nova Scotia. He said other airports also were hit, but that damage at the Halifax facility, Nova Scotia's largest airport, was minor.

Fiona had weakened to tropical storm strength Saturday afternoon as it moved across the Gulf of St. Lawrence. The U.S. hurricane center said Fiona had maximum sustained winds of 70 mph. It was centered about 80 miles northwest of Port aux Basques and moving northeast at 8 mph.

In Sydney, Nova Scotia, the largest city in Cape Breton, about 20 people took refuge at the Centre 200 sports and entertainment facility, said Christina Lamey, a spokeswoman for the region. Lamey said there were hundreds of people displaced in the province.

Fiona so far has been blamed for at least five deaths -- two in Puerto Rico, two in the Dominican Republic and one in the French island of Guadeloupe.

Information for this article was contributed by Morgan Lee of The Associated Press.