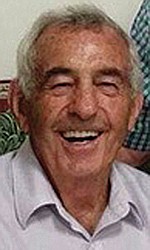 FORT SMITH -- George Loss was a walking oxymoron, at least when it came to his last name, because he didn't lose much over his 28-year career as a football coach, especially early on.

Loss guided what could be considered the first small-school dynasty in the state when he led Fort Smith-based St. Anne's Academy, a private Catholic school located at the top of Garrison Avenue, to a 116-15-3 record from 1954-1966 with two of the longest winning streaks in state history.

Loss, who passed away recently at age 90, succeeded John Lunney as the coach of the Buffaloes, continuing a winning tradition.

Loss led St. Anne's to a 38-game winning streak that started with the final game in 1962 against Stilwell, Okla., the week after losing to Rogers, which finished 10-0.

"Coach Loss was the teacher elite," said Leon Sparks, who played for Loss in the 1960-62 seasons. "He wouldn't let us go in until we ran the play perfectly. We would run one more play 40 times until we got it perfect. Then after that, we had to hit the hill a bunch of times. That's how we got our conditioning."

Under Loss, St. Anne's moved its home games from Andrews Field to Hunt's Park because of his relationship with Clarence Higgins, the Boys Club director from 1945-1971. Loss used the steep hill that goes up behind Hunt's Park that borders Oak Cemetery for conditioning.

"Oh, that hill," said Ralph Obana, who played for Loss from 1961-63. "He was hard-nosed and tough. I came from public school and played at Darby Junior High, and the coaches had very colorful language, but I never heard Coach Loss utter a cuss word."

"We were the best-conditioned team in our conference, he made sure of that," said Paul Sparks, Leon's younger brother, who played on the 1962-64 teams. "He was a heck of a coach. He taught the fundamentals and conditioning fluently, every day. Blocking and tackling, we worked on that every day. It was quite an experience."

In 1963, St. Anne's beat Clarksville 20-13 in the second game of the year, and Loss wasn't satisfied with his team's effort.

"They were good," Paul Sparks said. "We were running plays in practice, and we ran it 'one more time' 30 times because somebody was messing up. Then we ran the hill 20 times up and down. Then we went down on the football field and ran around the goalposts, and then we ran 100s and then 60s. That week we played Clarksville. We beat them, but the second half we were just dead. He asked me the next week why we didn't play hard the second half. Our legs were gone. We didn't have anything left. He eased up that next week, but that's the way he was."

Loss' teams, like most teams during that time, was run-oriented. He liked the Split-T formation similar to the Dead-T.

"We didn't pass much," Obana said. "We didn't need to, but most teams passed then when they needed to."

St. Anne's finished No. 1 in Class A in the final Associated Press poll in 1964 and 1965, which can be considered state championships before the modern era of the playoffs that began in 1968. The Arkansas Sports Writers Association, the predecessor to the state's AP poll, first voted on a high school poll in 1959 or he might have a couple of earlier No. 1 finishes.

The '65 team was indisputable. The Buffaloes gave up just two touchdowns all season, to Charleston and Paris, and recorded eight shutouts.

"They called a hold on Champ Thomas," Leon Sparks said. "Martine Bercher scored the touchdown. We would have kicked the extra point and beat them 7-6. The next year, we beat them 31-0 here."

Thomas and Bercher both went on to play for Frank Broyles and the Arkansas Razorbacks. Ben Beland was another who went on to play big-time college football at the University of Nebraska for Bob Devaney. On that staff was Tom Osborne and Monte Kiffin.

Bercher is the most widely known of the Buffaloes, scoring 23 touchdowns on the '60 team that outscored opponents by a 396-59 mark. Bercher went on to an All-American career at the University of Arkansas.

Loss was named to the Arkansas Coaches Association All-Star staff in 1958 and was the head coach of the West team in 1965 with Van Buren native and then-Springdale head coach Rex Yerby and Alma head coach Gene Bradley, a quarterback at Van Buren under Clair Bates, as assistants.

Legendary Alma coach Frank Vines was on the West team in '65 under Loss.

"The All-Star game, you think of fun and games, he went down to play football," Vines said. "We worked. It was all work and no play."

Vines had signed to play with Ouachita Baptist University, and the All-Star game proved to be his preseason workout. Loss conducted two-a-day practices and an intra-squad scrimmage, and after the midweek scrimmage that week Vines moved up to the first-team unit to start in the All-Star game.

"It was great for me," Vines said. "He got me in football playing shape that week. It was hard, but I was impressed especially with the work ethic and what he demanded out of his players."

"I could see how St. Anne's was so successful," Vines said. "He was that kind of coach. He was the old-timey coach that you did everything based on hard work."

Paul Sparks joined Vines in that All-Star game and was captain of the West team along with Fort Smith's Lyndell Bland.

"We did the same grind that we did at St. Anne's," Paul Sparks said. "It was the same thing: line drills, blocking, tackling and all that stuff."

Loss developed his winning ways at Hartford under Wallace Hunton. During the time that Loss was at Hartford, they won seven district championships in football, basketball and track, including a Class B state title in track.

In 1948 and 1949, Loss played for Hartford teams that went to the state playoffs in football during the abbreviated period of postseason play in the state.

In 1948, Hartford gave up just two touchdowns in the regular season with seven shutouts in nine games before losing, 21-13, in the first round of the Class B playoffs to Dermott, which had quarterback Lamar McHan who went on to star for the Arkansas Razorbacks.

Loss then went to the College of the Ozarks, which competed in the Arkansas Intercollegiate Conference, and started every game for four years. He was an All-AIC guard and named to the University of the Ozarks Hall of Fame in 1967.

In 1959, Loss gave a young coach straight out of college named Billy Bock his first coaching job as an assistant after his graduation from the College of the Ozarks. Bock was the offensive coordinator for St. Anne's and started the baseball and basketball programs at the school, winning two state baseball titles.

Loss, the perfectionist, and the young Bock proved to be a perfect combination of good cop, bad cop.

Loss coached Catholic for 10 years, winning 29 games in his first three years there behind the greatest quarterback in school history in Jimmy Doolittle, who was selected the Associated Press Super Team quarterback in 1970.

Loss left Catholic after consecutive 3-9 seasons as head coach but was still the winningest active coach in the state at the time after winning 71 games in his 10 years there.

Retired Fort Smith Northside coach Joe Fred Young was the head coach at Little Rock Central and coached against Catholic and Loss the first four years Young was at Central, and the two developed a friendship.

"I was single at the time, and George and I got together quite frequently and played bridge," Young said. "The fact I was single, he took the opportunity many times to set me up with a potential wife."

While at Central, Young recalled a game when he had Houston Nutt as a quarterback against Catholic.

"It was hard for me when we played somebody that I was close to and we'd win," Young said. "We played them when Houston was a sophomore at War Memorial Stadium. They had us down 21-0, and right before half they got us for a safety and made it 23-0. We came back in the second half and scored three times and made three two-point conversions to beat George 24-23. It was one of those weird things."

"George told me that he and I were just alike in the way we coached, the way we treat our players and our beliefs," Young said. "I thought that was quite a compliment because George was really an accomplished football coach."

Even after he retired from coaching, Loss would stop by to see Young and his staff often.

"When George would come back to Fort Smith, he would always come by and visit," Young said. "He knew Champ Thomas because he coached him, he knew Bill Breedlove, and he knew Doug McKinney real well. He always visited with us, and it was always a real treat."

Under Loss, Catholic may have been the first private school victim of a Competitive Equity Factor before the official one was recently passed by the Arkansas Activities Association. The Rockets were moved up in classification because of their success to the state's largest classification in 1971 but still tied Fort Smith Northside for the conference's championship.

He faced the same type of scrutiny at St. Anne's. In 1961 and 1962, for example, 4A conference opponents Greenwood, Booneville, Paris, Mansfield and Clarksville refused to play the small-school power, and the Buffaloes were forced to play seven teams either in Oklahoma or up in classification like Rogers and Springdale to count as district games.

"He said that was the toughest schedule that St. Anne's had ever played," said Leon Sparks. "We had to play teams outside our district because they wouldn't play us. They couldn't beat us. We had to play Springdale, Rogers, Bentonville and four Oklahoma schools."

The schools refused to play them, and the Arkansas Activities Association said they had to schedule other opponents that would count as conference games. In 1961, St. Anne's went 4-1-1 in the conference, finishing third, but Ozark was the only team that played them in the conference. In '62, St. Anne's finished 4-2, and again only Ozark played them. So the Buffaloes were denied conference championships both years because they had to play Oklahoma schools and schools in a larger classification that counted as conference games.

"I always had a lot of respect for Ozark because of that," Leon Sparks said. "We were accused of recruiting, but everybody that played on the team my senior year were friends of mine that lived on the north side of town. If they were Catholic, they went to St. Anne's. We didn't recruit."

Loss left Catholic for Bryant in 1978 for one year before taking over at North Little Rock Ole Main for three years. Loss ended his coaching career as an assistant at Little Rock Hall, first under legendary C.W. Keopple and then Roy Wade, before retiring in 1993. He finished his career with a 202-94-11 record as a head coach, counting the one year in Missouri. 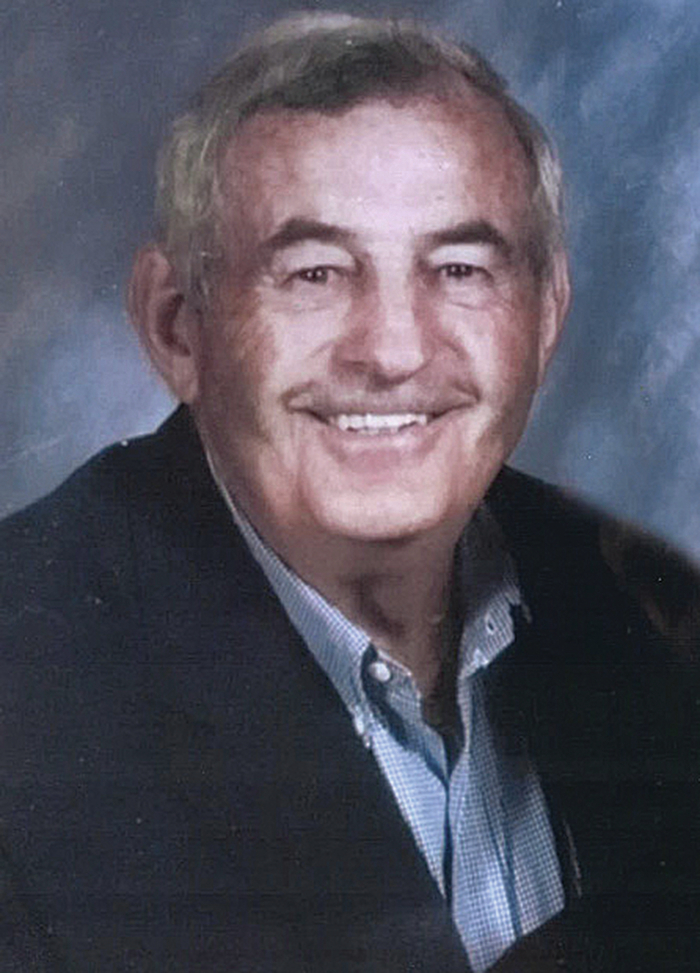 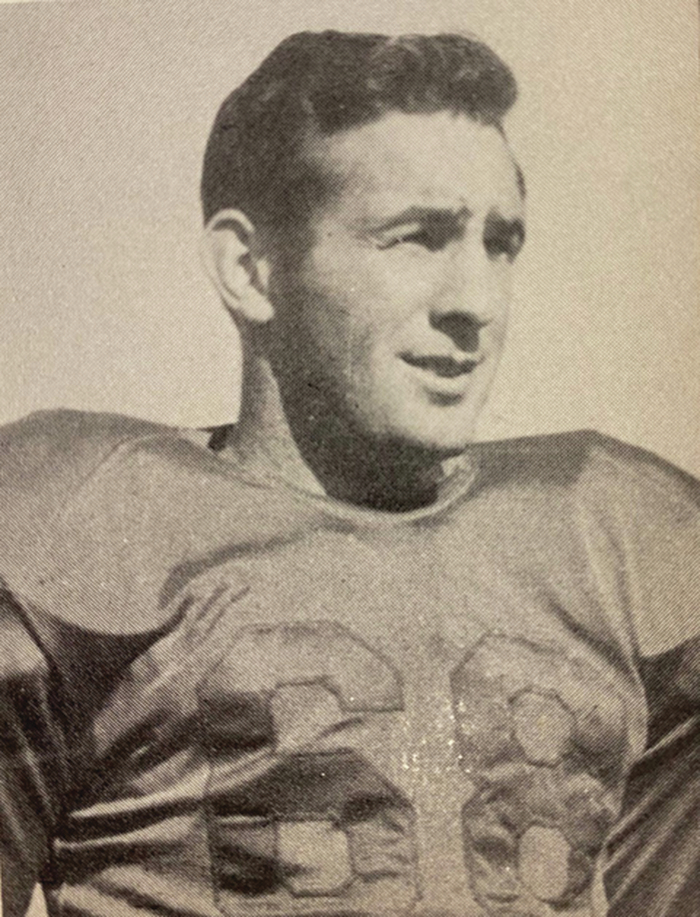 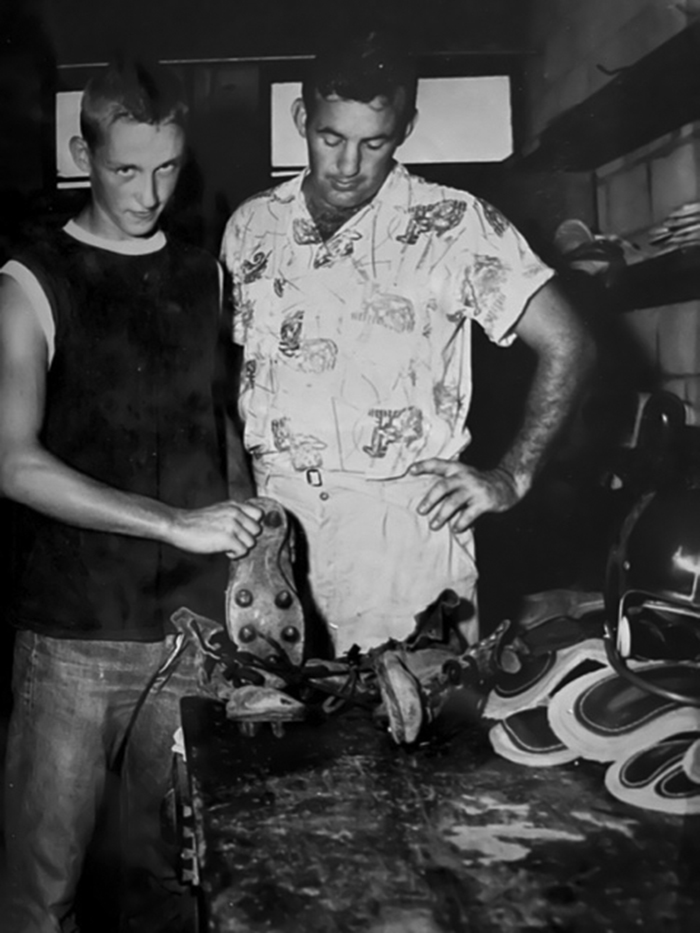 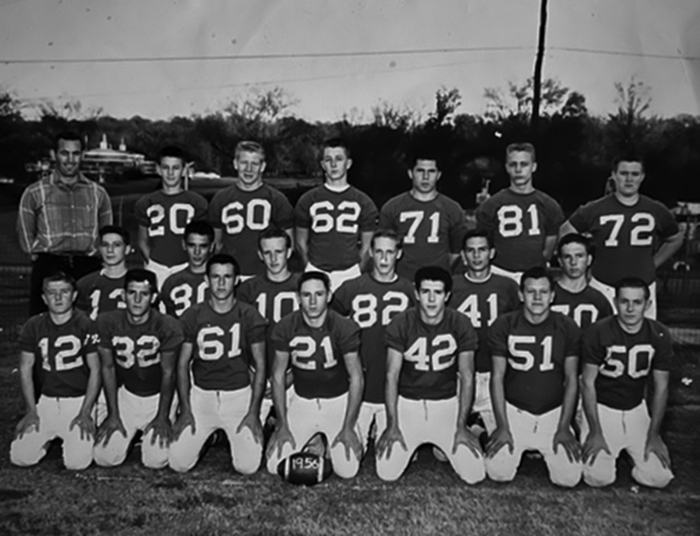 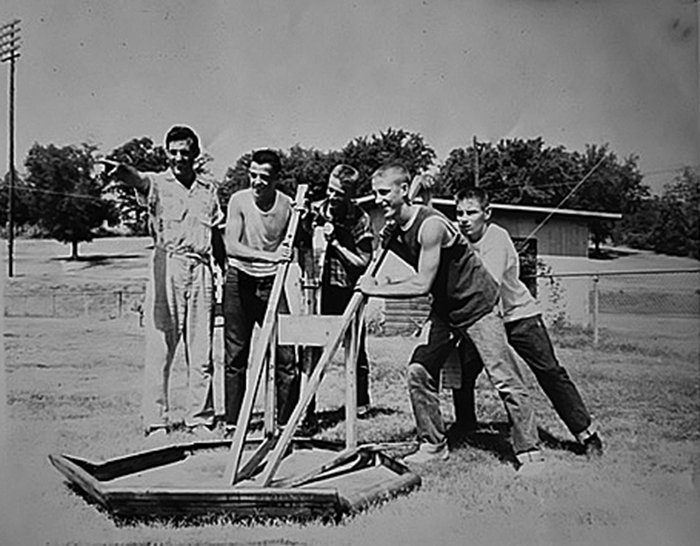 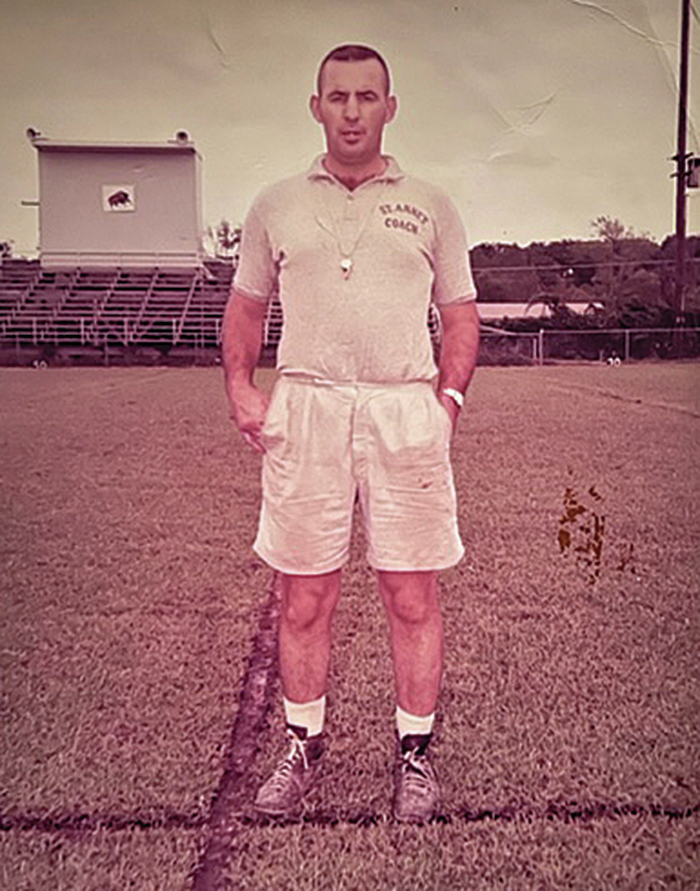 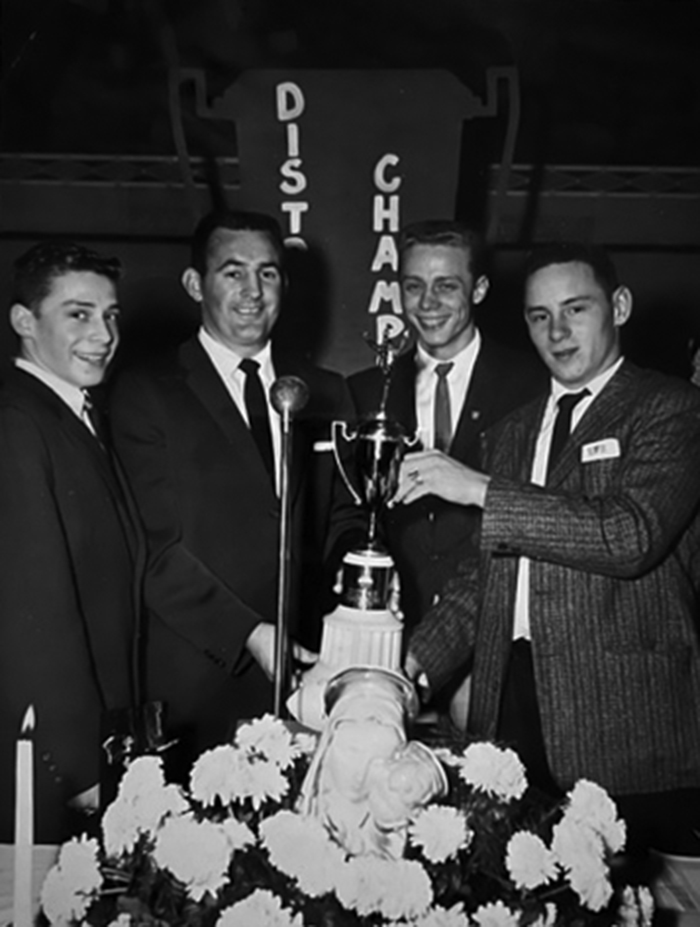 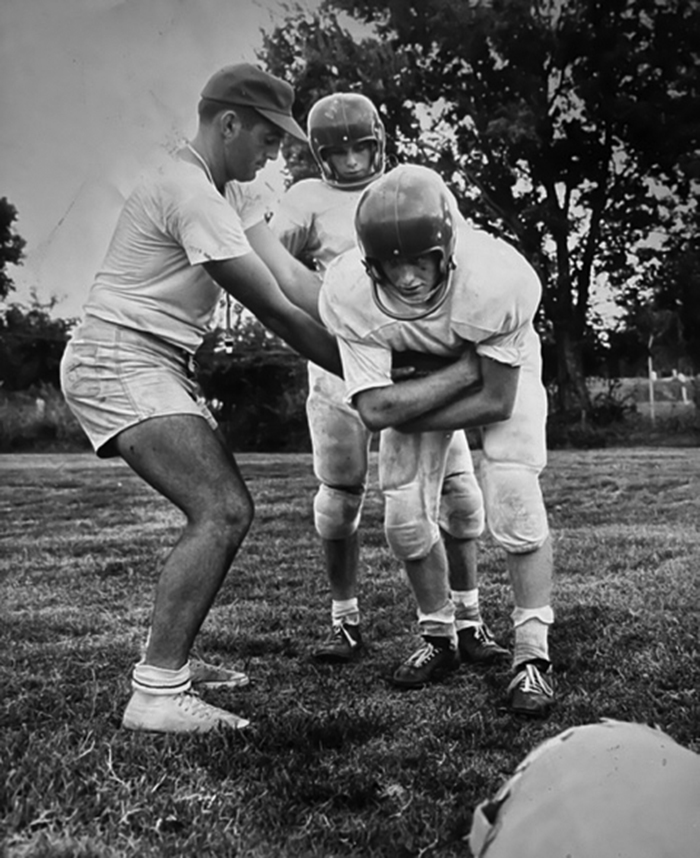 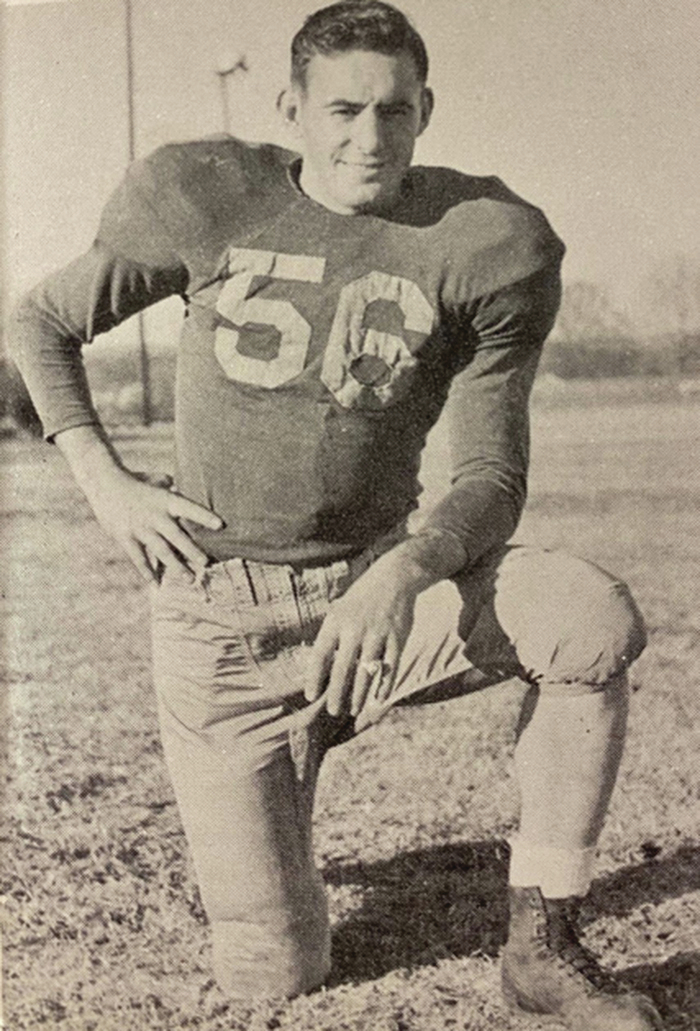