Hogs slow to recover from fumble return for TD 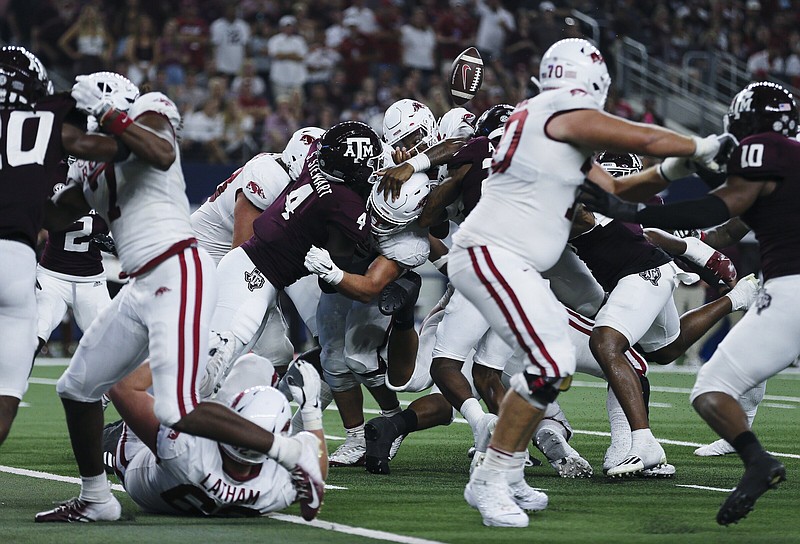 Arkansas quarterback KJ Jefferson (1) loses the ball as he leaps towards the end resulting in a Texas A&M score, Saturday, September 23, 2022 during the second quarter of a football game at AT&T Stadium in Arlington, Texas. Visit nwaonline.com/220924Daily/ for today's photo gallery...(NWA Democrat-Gazette/Charlie Kaijo)

ARLINGTON, Texas -- A potential two-touchdown swing on one play helped Texas A&M beat the University of Arkansas on Saturday night in AT&T Stadium.

One second it looked like Arkansas was going to take a 14-point lead.

A few seconds later the Aggies had scored a touchdown instead of the Razorbacks.

The play didn't give No. 23 Texas A&M the lead, but it turned what looked ready to be a commanding advantage for Arkansas into momentum in the Aggies' favor, and they held on to beat the No. 10 Razorbacks 23-21.

The Razorbacks had a chance to regain the lead until Cam Little missed a 42-yard field goal attempt with 1:30 left, but the game might never had come down to that if not for Texas A&M's improbable score with 3:11 left in the second quarter.

Arkansas led 14-7 when quarterback KJ Jefferson hit Jadon Haselwood for a 12-yard gain to give the Razorbacks first and goal at the Texas A&M 3.

Jefferson kept the ball on the next play and tried to leap over the middle of the Aggies' defense into the end zone, but as he was airborne linebacker Chris Russell knocked the ball loose.

"He just made a great play on the ball," Jefferson said of Russell's hit. "I've just got to finish, be more aggressive.

"When we're on the goal line, just finish the play."

Instead, it was the Aggies that finished the play in unlikely fashion.

Cornerback Tyreek Chappell recovered the ball for the Aggies at the 3 and returned it to their 18, where running back Raheim Sanders grabbed him

But before Sanders could get Chappell on the ground, he handed the ball to safety Demani Richardson.

"I started [lined up] on the Arkansas sideline," Richardson said. "I saw the quarterback jump up and try to score. Then I saw Chris hit the ball up. After that, I saw Tyreek caught it. He started running, but he got caught.

After Richardson got the ball, he raced down the field in front of the Texas A&M sideline with his coaches and teammates cheering wildly and ran 82 yards for a touchdown to cut Arkansas' lead to 14-13.

"I thought [Richardson] could outrun the dude," said Texas A&M running back Devon Achane, who rushed 19 times for 159 yards and 1 touchdown. "I saw Demani put his hands up and saying. 'Give me the ball.' I didn't know he was going to give it to him.

"That's just a great play by the both of them. It changed the game.

The Aggies failed the convert on the extra-point attempt because of a botched snap, but the play got them back into the game.

"It was first down too. ... We can't do that on first down. If it was fourth down, that's a different story. Unfortunately, it just got popped out."

The Aggies took a 23-14 lead with a dominating third quarter as the Razorbacks struggled to overcome the lost scoring opportunity at the goal line.

"I think for whatever reason that took a lot of wind out of our sail," Pittman said on Arkansas' postgame radio show. "We tried as coaches not to let it do that, and then certainly had a drive there with an opportunity to win. But unfortunately we didn't, so a very disappointed locker room."