Putin’s call-up of troops leads to protests by Compiled by Democrat-Gazette staff from wire reports | September 25, 2022 at 5:09 a.m. 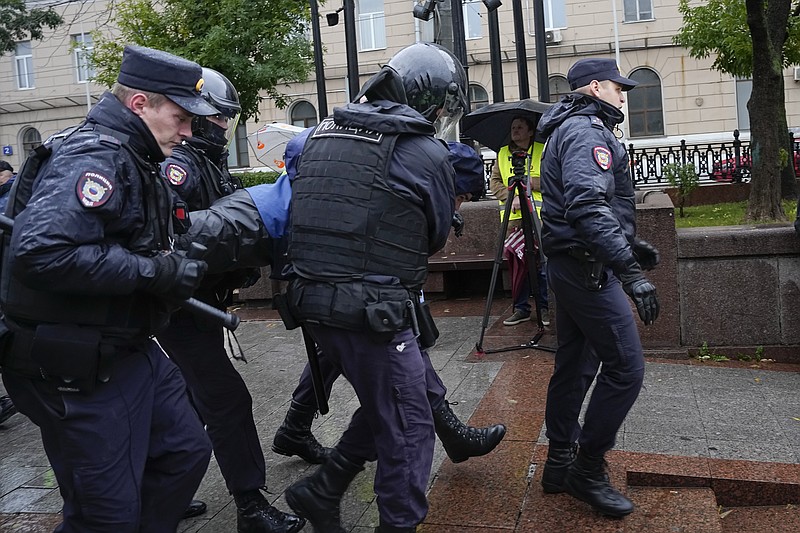 Police officers carry a detained a demonstrator during a protest against a partial mobilization in Moscow, Russia, Saturday, Sept. 24, 2022. (AP Photo)

Police detained nearly 750 people, including over 370 in Moscow and some 150 in St. Petersburg, according to OVD-Info, an independent website that monitors political arrests in Russia. Some of the arrested individuals were minors, OVD-Info said.

Members of the Spring movement, who called for the protests Saturday under the slogan "No Mobilization to the Grave," had their homes searched in St. Petersburg, as did several activists and journalists working for independent news media outlets.

The demonstrations followed protests that started within hours Wednesday after Putin, in a move to beef up his volunteer forces fighting in Ukraine, announced a call-up of experienced and skilled army reservists.

The Defense Ministry said about 300,000 people would be summoned to active duty, but the order left a door open to many more getting called into service. Most Russian men ages 18-65 are automatically counted as reservists.

On Saturday, police deployed in force in the cities where protests were scheduled by Spring and supporters of jailed opposition leader Alexei Navalny. They moved quickly to arrest demonstrators, most of them young people, before they could hold protests.

In Moscow, a heavy contingent of police roamed a downtown area where a protest was planned under pouring rain and checked the IDs of passersby. Officers rounded up those they deemed suspicious and later distributed call-up summonses to the men who were arrested.

A young woman climbed on a bench and shouted "We aren't cannon fodder!" before police took her away.

Police detained a man in a park just outside Red Square and whisked him away as others shouted "Shame!"

Before being rounded up in St. Petersburg, a small group of demonstrators managed to briefly march along the main Nevsky avenue shouting "Putin into the trenches!"

In the Siberian city of Novosibirsk, riot police moved in on a group of protesters who were holding hands in a circle and singing an anti-war song popularized in the 1960s called "May There Always Be Sunshine." About 70 people there were detained.

People who tried to hold individual pickets that are allowed under Russian law also were detained.

Conscripts brawled with police officers in the Siberian city of Omsk, according to footage that has been shared on social media.

In Tomsk, a man stopped traffic as he screamed, "A peaceful life for our children" and "Don't watch television," a reference to the stream of propaganda on state networks. He was arrested within minutes.

Despite the Kremlin's crackdown on dissent, more than 1,300 demonstrators were detained Wednesday, according to OVD-Info, while several protests were reported Thursday, including in Dagestan -- an impoverished southern region where anti-draft protesters blocked a federal highway.

Putin on Saturday signed a hastily approved bill that toughens the punishment for soldiers who disobey officers' orders, desert or surrender to the enemy.

"Russian commanders do not care about the lives of Russians. They just need to replenish the empty spaces left by the dead, wounded, those who fled or the Russian soldiers that were captured," he said, adding, "The key moment has come for you: Right now it is being decided whether your life will end or not."

Russia made its case to the world Saturday for its war in Ukraine, repeating a series of grievances about its neighbor and the West to tell the U.N. General Assembly meeting of leaders that Moscow had "no choice" but to take military action.

After days of denunciations of Russia at the prominent diplomatic gathering, Foreign Minister Sergey Lavrov sought to shift the focus to Washington. His speech centered on a claim that the United States and its allies -- not Russia, as the West maintains -- are aggressively undermining the international system that the U.N. represents.

Invoking history ranging from the United States' war in Iraq in the early 2000s to the 20th-century Cold War, Lavrov portrayed the U.S. as a bully that tries to afford itself "the sacred right to act with impunity wherever and wherever they want" and can't accept a world where others also advance their national interests.

"The United States and allies want to stop the march of history," he maintained.

The U.S. and Ukraine didn't respond at the assembly on Saturday but can still offer formal responses later in the meeting. Both countries' presidents have already given their own speeches describing Russia as a dangerous aggressor that must be stopped.

Lavrov, for his part, accused the West of aiming to "destroy and fracture Russia" in order to "remove from the global map a geopolitical entity that has become all too independent."

The Ukraine war has largely dominated the discussion at the assembly's big annual meeting, and many countries have laid into Russia for its Feb. 24 invasion -- denouncing its nuclear threats, alleging it has committed atrocities and war crimes, and lambasting its decision to call up some of its reserves even as the assembly met.

"Neither partial mobilization, nuclear saber-rattling, nor any other escalation will deter us from supporting Ukraine," Swedish Foreign Minister Ann Linde declared Saturday.

Russia does have some friends in the sprawling chamber, and one -- Belarus -- offered a full-throated defense Saturday of its big neighbor. Echoing Russia's talking points, Belarusian Foreign Minister Vladimir Makei said "it was precisely the West that made this conflict inevitable" in Ukraine.

The speeches came amid voting in Russian-occupied parts of eastern and southern Ukraine on whether to join Russia. Moscow characterizes the referendums as self-determination.

Some observers think the expected outcome could serve as a pretext for Putin eventually to escalate the war further.

Lavrov dismissed the complaints as the West "throwing a fit" about people making a choice on where they feel they belong.

Russia has offered a number of explanations for what it calls its "special military operation" in Ukraine. Lavrov recapped a couple: risks to Russia from what it considers a hostile government in Kyiv and a NATO alliance that has expanded eastward over the years and relieving Russians living in Ukraine -- especially its eastern region of the Donbas -- of what Moscow views as the Ukrainian government's oppression.

"The incapacity of Western countries to negotiate and the continued war by the Kyiv regime against their own people left us with no choice" but to recognize the two regions that make up the Donbas as independent and then to send troops in, Lavrov said.

The aim was "to remove the threats against our security, which NATO has been consistently creating in Ukraine," he explained.

Zelenskyy last week declared that his forces will ultimately oust Russian troops from all of Ukraine.

"We can do it with the force of arms. But we need time," said Zelenskyy, the only leader who was allowed to address the assembly by video this year.

The war has disrupted the trade of Ukrainian and Russian grain and Russian fertilizer, touching off a global food crisis. A deal recently brokered by the U.N. and Turkey has helped get Ukrainian grain moving, but fertilizer shipments have proved more difficult.

At a news conference after his speech, Lavrov said he discussed problems with the deal at a meeting this week with U.N. Secretary-General Antonio Guterres.

Although international sanctions against Russia did not target food and fertilizer exports, shipping and insurance companies and banks have been loath to deal with Moscow -- and the Kremlin has frequently pointed to that in alleging that Western sanctions have exacerbated the crisis. Lavrov told reporters Saturday that Russia wants fertilizer stuck in European ports to be given to needy countries quickly.

Oleksandr Starukh, the Ukrainian governor of Zaporizhzhia, one of the regions where Moscow-installed officials organized referendums on joining Russia, said a Russian missile hit an apartment building in the regional capital, killing one person and injuring seven others.

Ukraine and its Western allies say the referendums underway in Kherson and Zaporizhzhia in the south and the eastern Luhansk and Donetsk regions have no legal force. They alleged the votes were an illegitimate attempt by Moscow to seize Ukrainian territory stretching from the Russian border to the Crimean Peninsula.

Luhansk Gov. Serhiy Haidai said the voting "looked more like an opinion survey under the gun barrels," adding that Moscow-backed local authorities sent armed escorts to accompany election officials and to take down the names of individuals who voted against joining Russia.

Zelenskyy urged Ukrainians in occupied regions to undermine the referendums and to share information about the people conducting "this farce." He also called on Russian recruits to sabotage and desert the military if they are called up under the partial troop mobilization Putin announced Wednesday.

"If you get into the Russian army, sabotage any activity of the enemy, hinder any Russian operations, provide us with any important information about the occupiers -- their bases, headquarters, warehouses with ammunition," Zelenskyy said.

To carry out the referendums that started Friday, election officials accompanied by police officers carried ballots to homes and set up mobile polling stations, citing safety reasons. The votes are set to wrap up Tuesday.

"Half of the population fled the Donetsk region because of Russian terror and constant shelling, voting against Russia with their feet, and the second half has been cheated and scared," Donetsk Gov. Pavlo Kyrylenko said.

In the Ukrainian capital, about 100 people from the Russia-occupied city of Mariupol, which is part of the Donetsk region, gathered to protest the referendum, covering themselves in Ukrainian flags and carrying posters that read "Mariupol is Ukraine."

The Russian Defense Ministry announced Saturday the dismissal of Gen. Dmitry Bulgakov from the post of deputy defense minister in charge of logistics. It didn't mention the cause for his ouster, but the move was widely seen as a punishment for the flaws in supporting operations in Ukraine.

Information for this article was contributed by Jennifer Peltz, Edith M. Lederer, Karl Ritter, Hanna Arhirova and staff members of The Associated Press and by Valerie Hopkins of The New York Times. 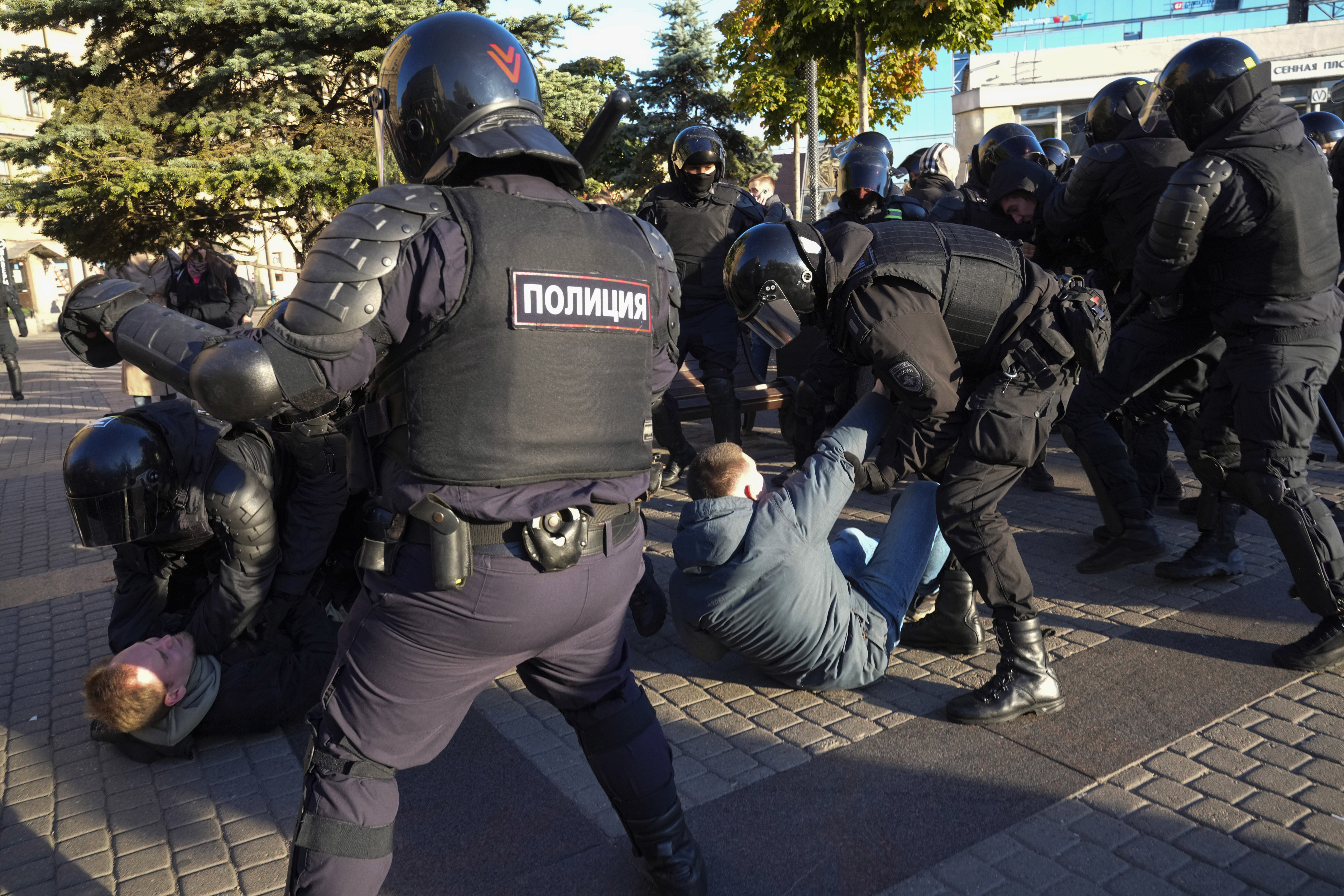 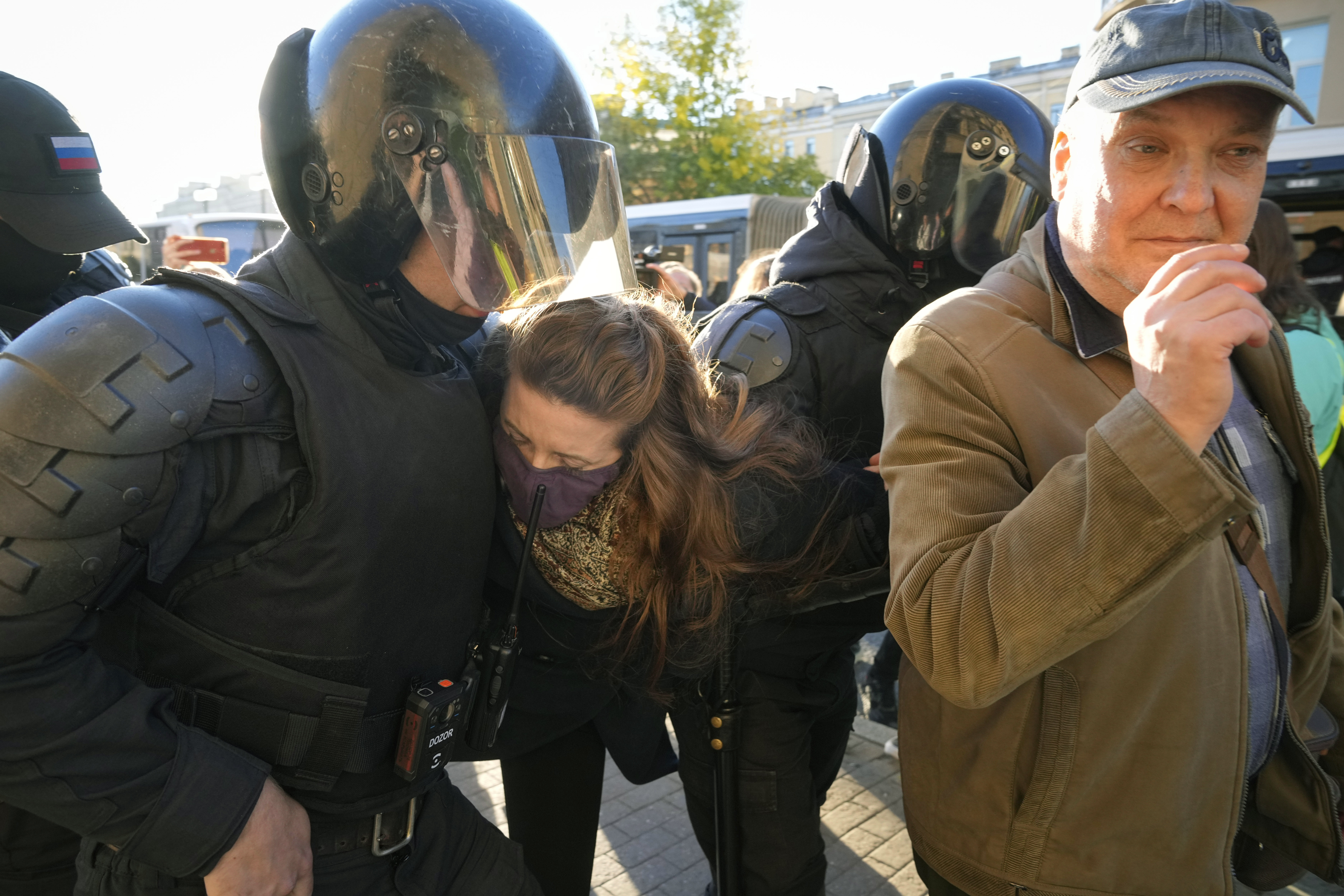 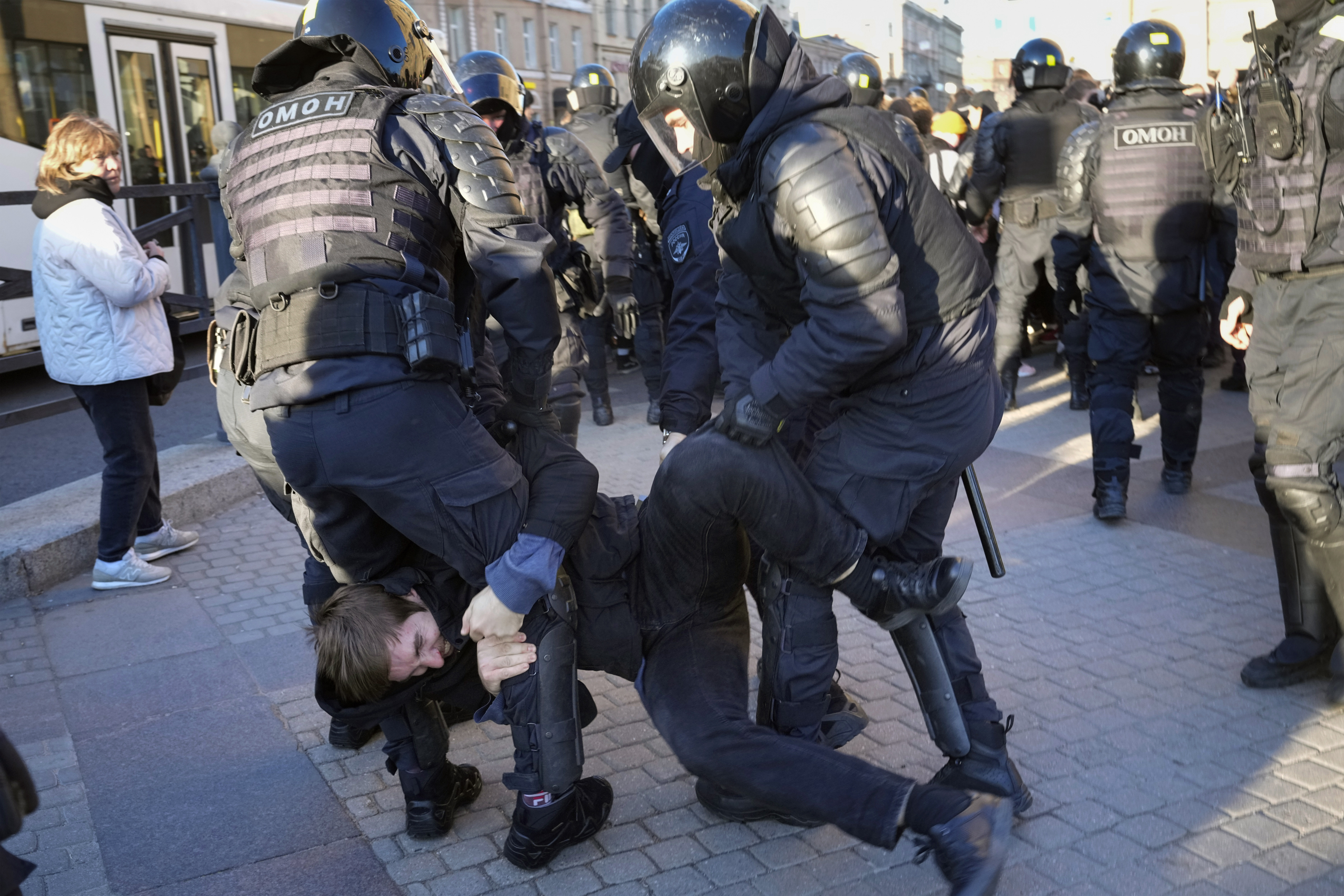 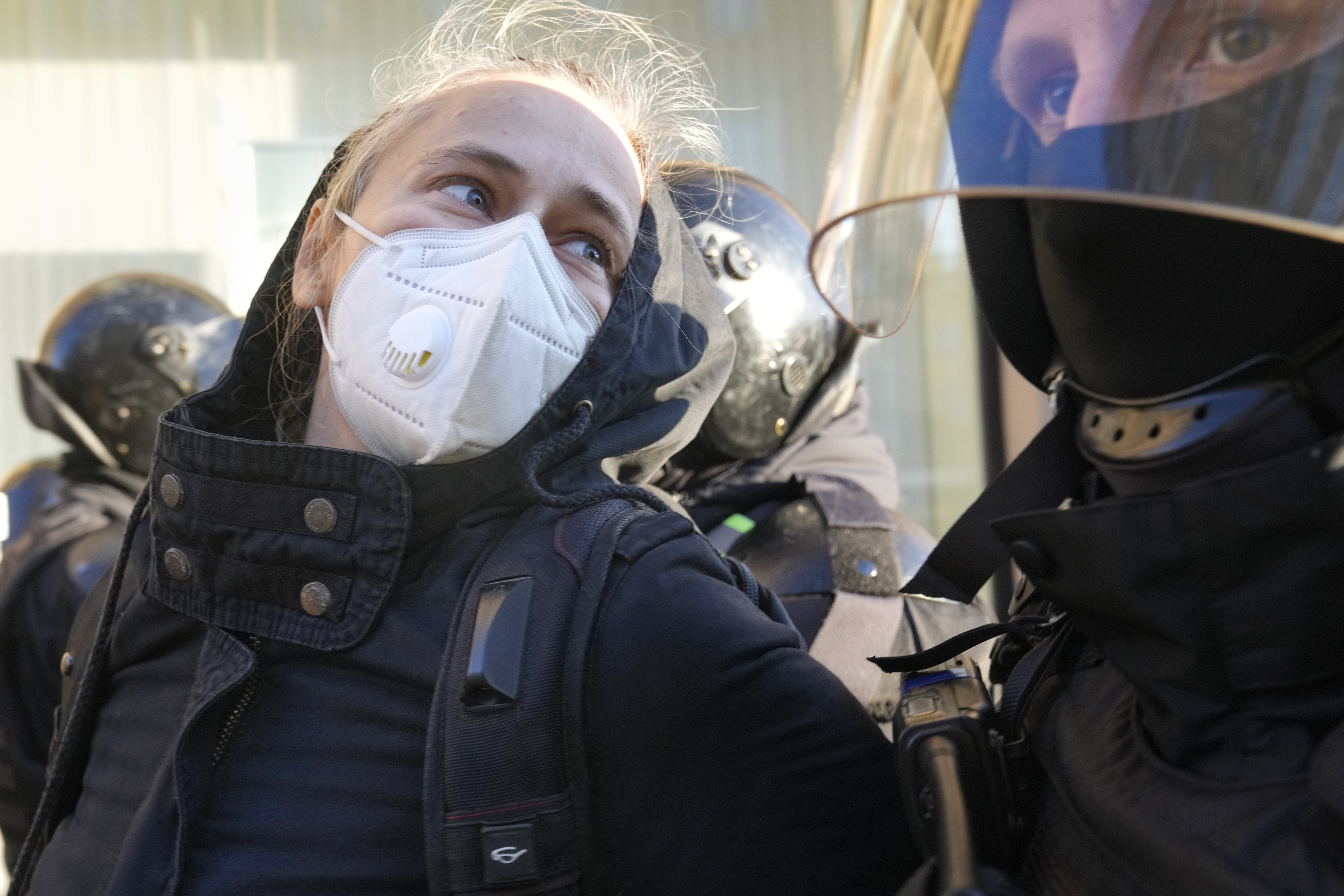 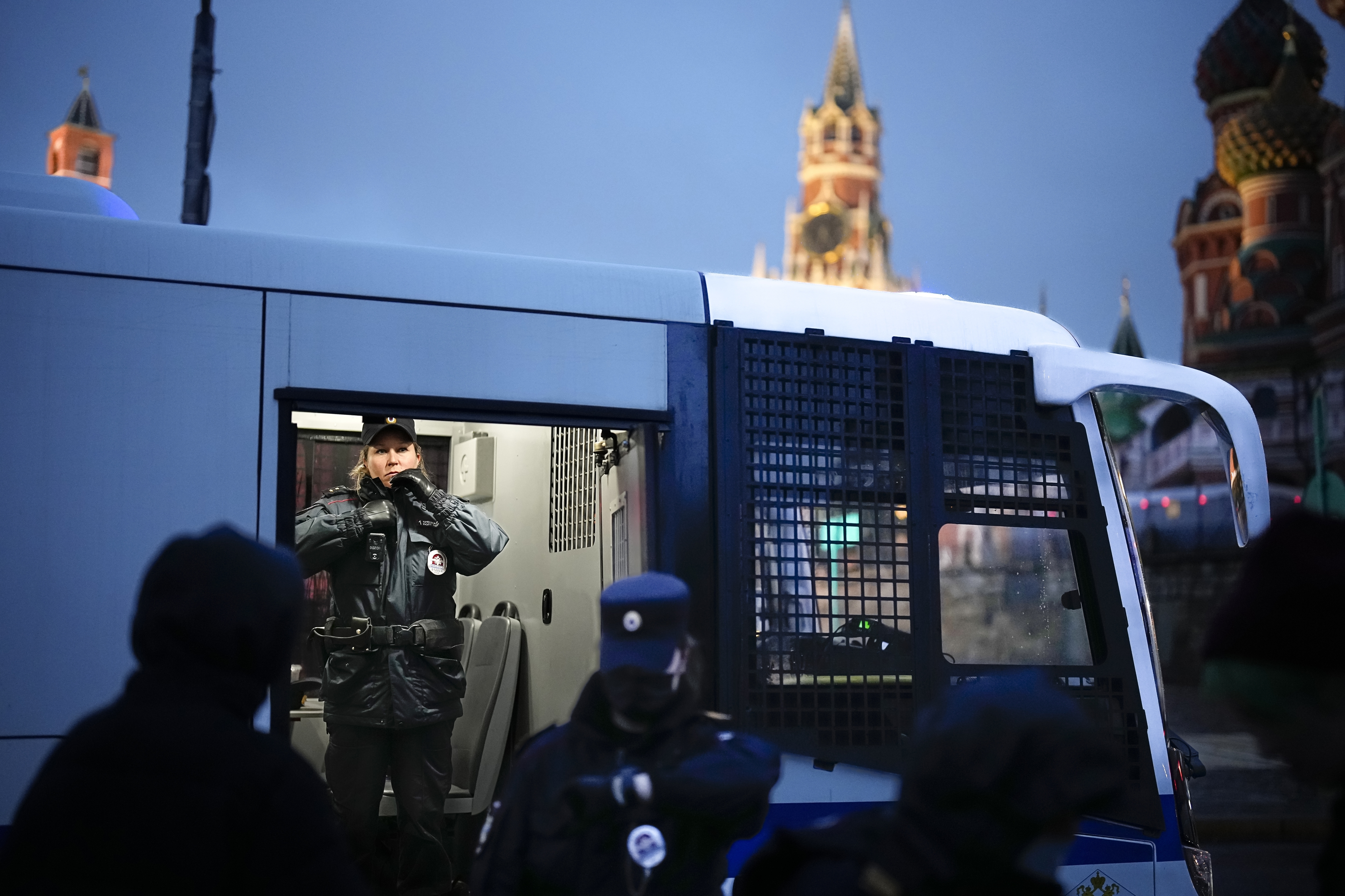 A Police officer stands inside a police bus with detained demonstrators during a protest against a partial mobilization near Red Square with the St. Basil's Cathedral, right, in the background in Moscow, Russia, Saturday, Sept. 24, 2022. (AP Photo) 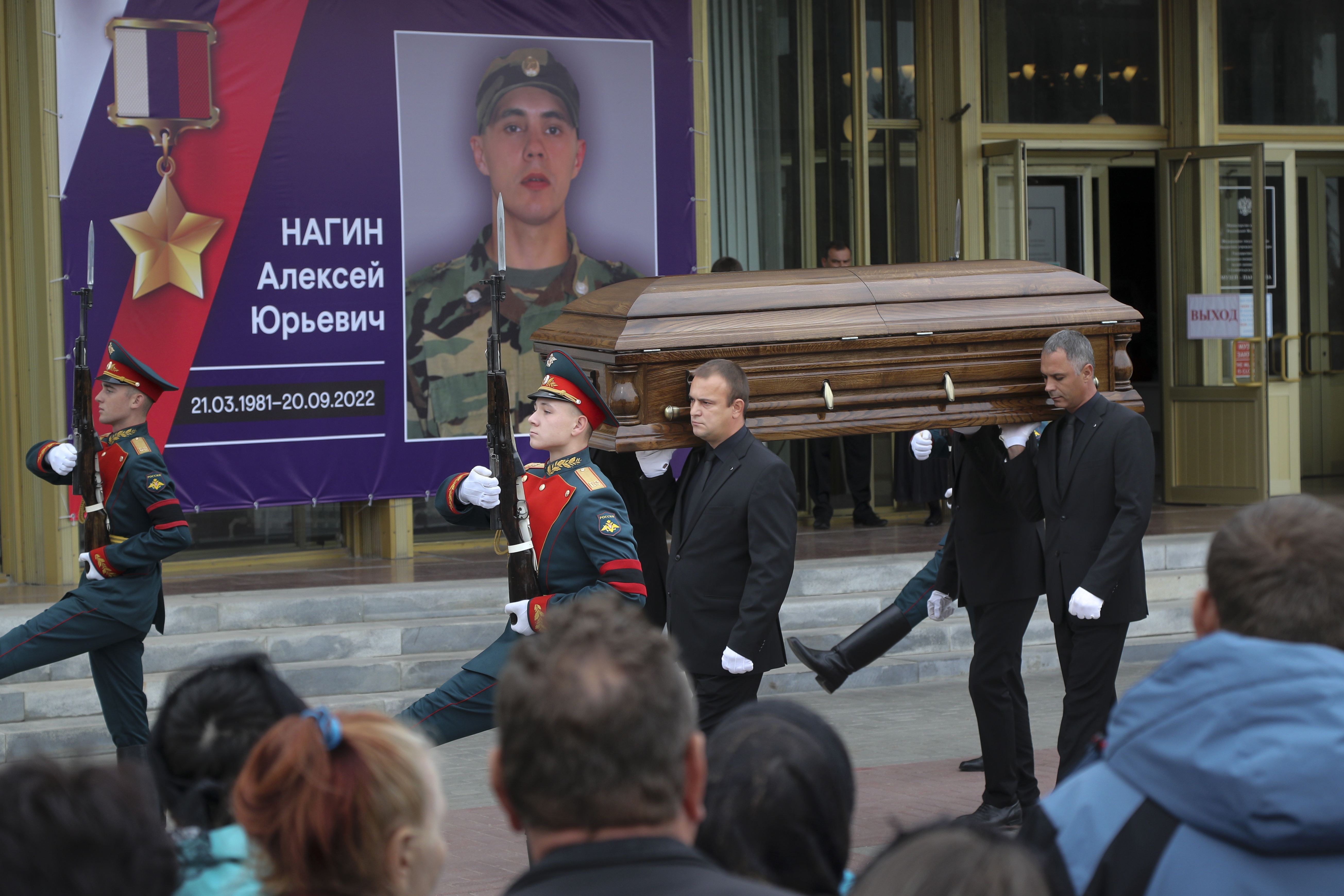 The honor guard escorts the coffin of Alexei Nogin, who was killed in combat in Ukraine, during a mourning ceremony, in Volgograd, Russia, Saturday, Sept. 24, 2022. Nogin was posthumously awarded with the Hero of Russia medal for fighting in Ukraine. (AP Photo) 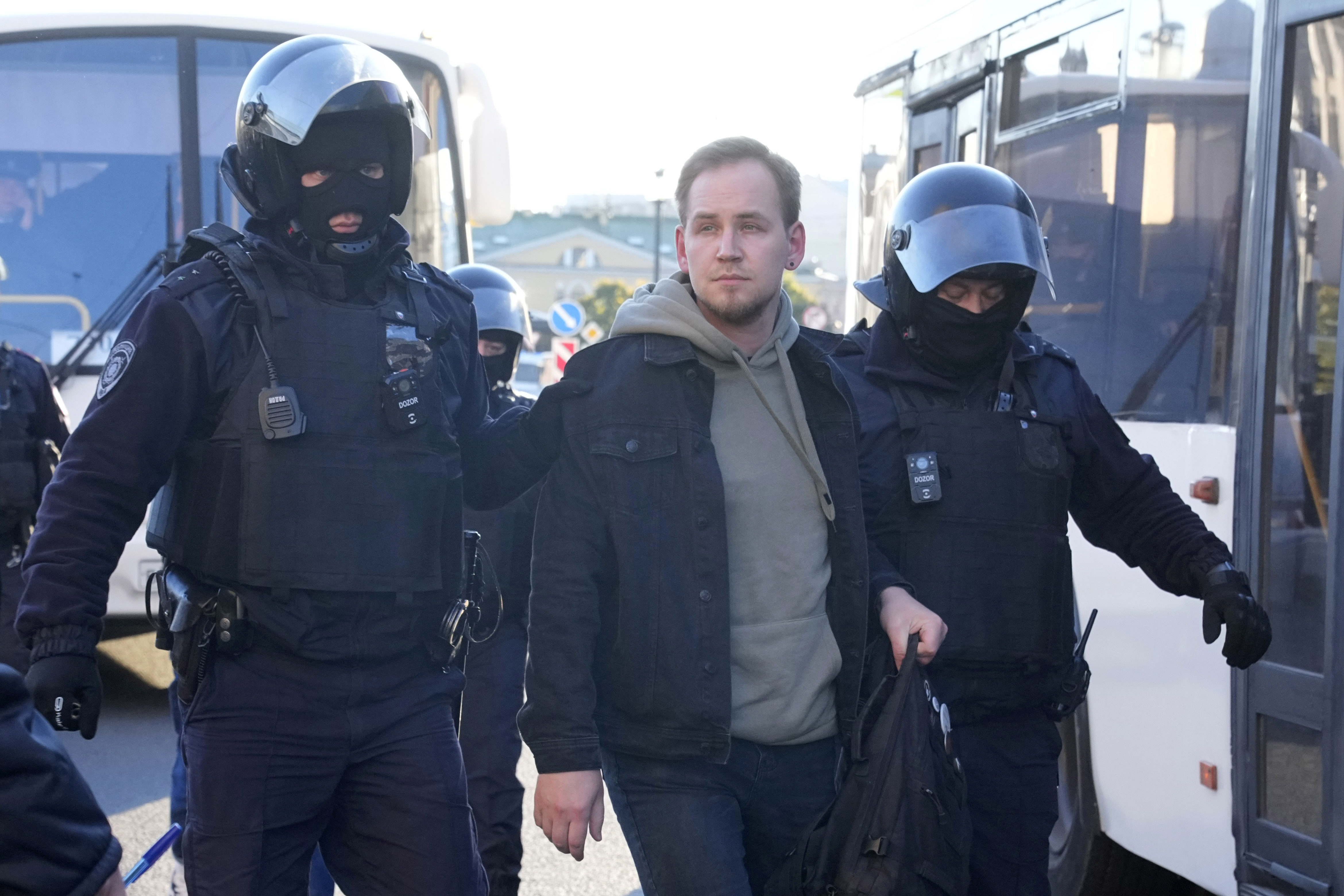 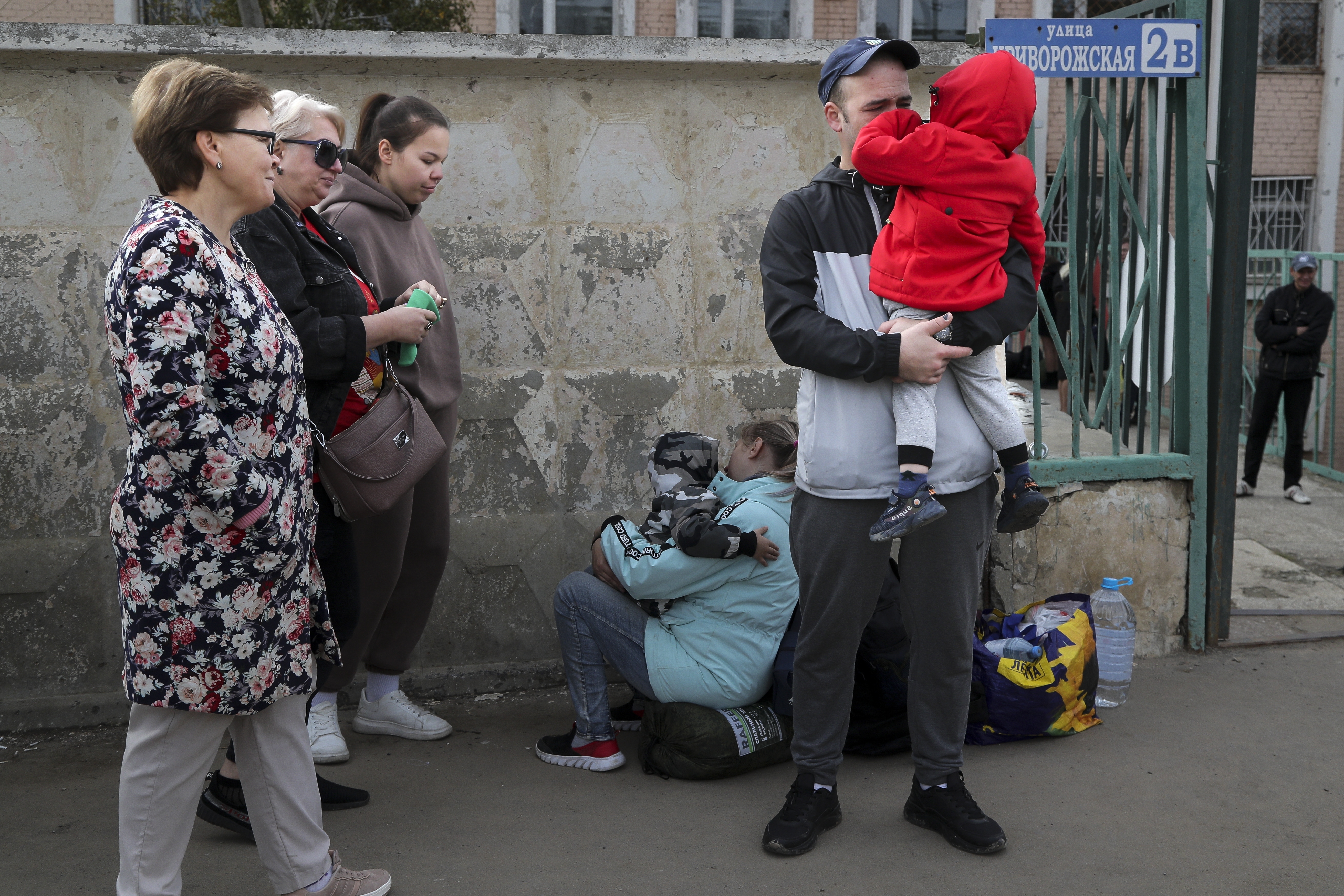 A Russian recruit, right, holds his child, as his mother, left, and other relatives stand outside a military recruitment center in Volgograd, Russia, Saturday, Sept. 24, 2022. Russian President Vladimir Putin on Wednesday ordered a partial mobilization of reservists to beef up his forces in Ukraine. (AP Photo) 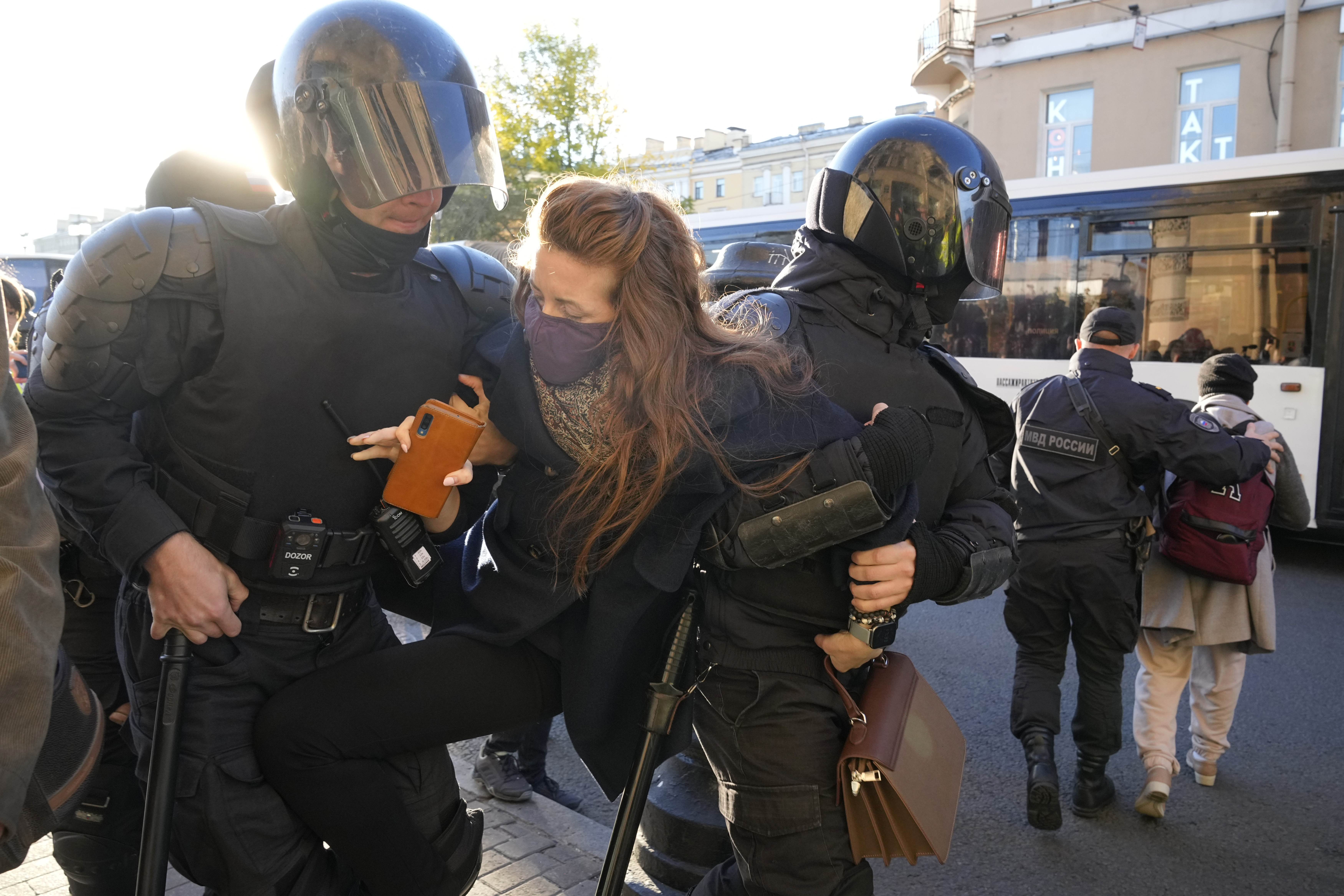