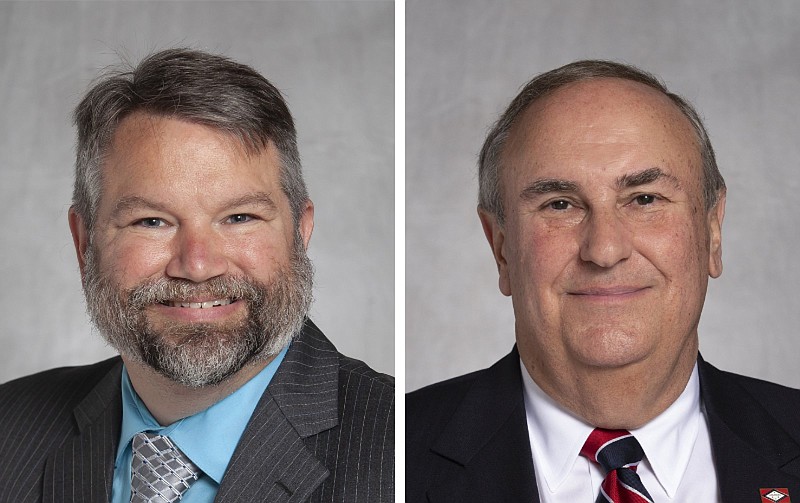 CONWAY -- In his bid to oust Republican Sen. Mark Johnson of Ferndale, Democratic candidate David Barber of Conway is emphasizing the benefits of having a Conway resident represent Senate District 17.

"I think fundamentally Conway and District 17 need someone who will represent the residents of the district fairly, honestly, and make sure that the things that are getting done are the things that they want to get done down in the Senate, not any sort of partisan or self-aggrandizing kind of positions," he said.

"I think living in Conway means that I can represent, especially the folks living here in Conway, better."

Johnson and Barber are vying for the Senate seat representing District 17 in the Nov. 8 general election. Early voting starts Oct. 24. In the May 24 Republican primary, Johnson defeated state Rep. Spencer Hawks of Conway.

Senate District 17 covers southwestern Faulkner County, including Mayflower and Conway, and northwestern Pulaski County, including Roland. In November, the state Board of Apportionment approved new legislative district boundaries for this year's elections based on information from the 2020 U.S. census. The board redraws these boundaries every 10 years.

Johnson said he's a fifth-generation son of Faulkner County and grew up in Conway, attending elementary, junior and high school in Conway and graduating from Hendrix College.

"I'm not a newcomer to Conway by any means," he said. "I consider myself part of the community."

Johnson said voters in Senate District 17 have a choice between "a conservative Christian Republican, who is pro-life, pro-2nd Amendment, seeking lower taxes [and] working against some of the negative influences in our culture, and someone who represents the opposite views of many of those issues, including the obvious ones being pro-life and 2nd Amendment.

"He is a genuinely nice fella," Johnson said an interview.

In response, Barber said, "I don't think you can be an honest broker if you see everything through a partisan filter.

"We all have the same concerns -- about health care, about education, about safety and security -- about a brighter future for us and our children. Our senator should be working towards that," he said.

On June 24, Arkansas Attorney General Leslie Rutledge implemented a 2019 state law that bans abortions in Arkansas, except to save the life of the mother in a medical emergency, after the U.S. Supreme Court overturned the landmark 1973 ruling that legalized abortion across the nation.

Barber said he heard many stories from people who required medical care that would conflict with the state's abortion law and worried it would lead to a death of a wife or daughter.

"I think the Legislature has put itself between doctors and patients, and I think that's a problem," he said.

Barber said a start to changing the state's abortion law would be to allow abortions in case of rape and incest and to clarify when doctors can act to begin saving the life of the mother in a medical emergency.

Johnson said he voted for the state's existing abortion law and still supports it.

Asked about changing state law to allow abortions in case of rape and invest, he said "it's tragic, because those are crimes and the person that is a victim of that crime [should be] helped."

Johnson said he has met more than one person who was born as a result of a rape and they are "beautiful human beings worthy of protection of the law."

"Obviously this is a tough one, but because I am conflicted that doesn't mean I can't error on the side of life, and that's how I believe that they are still human beings," Johnson said.

Barber said he wants to make sure that people, who legitimately want a gun for personal protection and for hunting, can get a gun.

He said he supports enacting a red flag law under which law enforcement can present specific facts that show an imminent and extreme risk to a court to petition for the temporary removal of guns from a household.

"Obviously there should be law enforcement and court oversight, a process to quickly resolve challenges, and there should be a penalty for misuse or false accusations," he said.

Johnson said he opposes enacting a red flag law without proper due process.

All due process rights should be protected, he said, and "sadly I know some on the left want to use that as an excuse to take away people's firearms."

Barber, 47, is an accountant who is making his second bid for elected office. In 2018, he ran unsuccessfully for Faulkner County assessor.

He graduated from high school in Vicksburg, Mich., earned a bachelor's degree in mathematics from Albion College in Michigan, and a master's degree in economics from Eastern Michigan University. He is married with a daughter.

"My wife and I moved to Conway in 2008 to take advantage of the excellent job opportunities available in Arkansas, with her joining a local college and me working for what was then AETN, now Arkansas PBS," Barber said.

Johnson, 68, is a retired business consultant who has served in the state Senate since 2019 representing Senate District 15. Senate District 15 includes all of Conway County and parts of Faulkner, Perry, Pulaski and Van Buren counties.

He is the son of the late state Supreme Court Justice Jim Johnson, who served in the state Senate from 1951-54.

Mark Johnson served as a staff member for Democratic U.S. Rep. Wilbur Mills from 1975-77, a congressional liaison for the U.S. Small Business Administration from 1979-81, and director of the state Department of Local Services for Republican Gov. Frank White from 1981-83. He is married with two daughters.

Two months ago, the Senate voted to approve its Ethics Committee finding that Johnson signed the name of Sen. Alan Clark, R-Lonsdale, on the sign-in sheet for reimbursement of per diem at the Senate's Boys State committee meeting June 3 when Johnson knew that Clark didn't attend the meeting.

The Senate didn't pay the $155 per diem to Clark for that meeting at the behest of Senate leader.

At that time, Johnson told senators he "was wrong" to sign in Clark's name, but "I want to insist to my colleagues that I am not a liar and I did not lie."

Two months ago, the Senate voted to approve its Ethics Committee's recommended penalties against Johnson, stripping Johnson of any chairman and vice chairman posts and his eligibility for per diem and mileage reimbursement, and removing him from the Ethics Committee for the rest of this year, reprimanding him, and recommending that future Senate president pro tempores not consider Clark for appointment to serve in the future on Boys State, Girls State or the Senate Ethics Committee.

Johnson had been vice chairman of the Joint Energy Committee, the Joint Budget Committee Claims Subcommittee, and the Legislative Council Charitable, Penal and Correctional Institutions Subcommittee.

Barber said he can't say whether the incident was a mistake or intentional on Johnson's behalf or a one-time thing or signatures of a pattern by Johnson.

"The people of District 17 deserve a representative who is not only trustworthy, but also makes them feel confident in their honesty," he said.

Everyone in Arkansas and America deserves to trust their elected representatives, Barber said.

Johnson said "I certainly accepted and admitted it was a mistake to sign in Sen. Clark's name.

"It was a simple misunderstanding that led to a mistake, the misunderstanding being that I believed in fact that Senator Clark had been there earlier that morning, and if I had known for sure he had not I would not have signed his name," he said.

Johnson said "I'm not a perfect person, but I think my 68 years of integrity outweighs one misunderstanding that led to a very minor mistake."

If he's reelected, he said he plans to introduce legislation again to take away state pensions from a state lawmaker or state employee who is convicted of a felony corruption crime in the line of duty.

Barber said he wants teachers to be treated as professionals and an engine of economic growth training students. He said he expects the House and Senate Education Committees' educational adequacy report due Nov. 1 to be a starting point of working together to boost teachers' pay in the 2023 regular session.

He said he would like to eliminate the state's 0.125% sales tax on groceries. That would require voter approval of a constitutional amendment because Amendment 75 of Arkansas approved by voters in 1996 levied a 0.125% sales tax for land conservation.

Barber said he would have voted against accelerating the reduction of the state's individual income tax to 4.9%, retroactive to Jan. 1, 2022, in the Aug. 9-11 special session due to economic uncertainty.

"It felt like we had things that we needed to address that we weren't addressing, and at the same time we were betting that we would be able to address them in the future," he said.

The tax-cut law will accelerate the reduction of the state's individual income tax rate from 5.5% to 4.9%, retroactive to Jan. 1, 2022, and the state's top corporate income tax rate from 5.9% to 5.3%, effective Jan. 1, 2023. The law will grant a temporary, nonrefundable income tax credit of $150 for individual taxpayers with net income up to $87,000 and of $300 for married taxpayers filing jointly with net income up to $174,000, and adopt a federal depreciation schedule for businesses.

Johnson said the state "has done a great job on cutting income taxes" and must continue cutting state income taxes to be competitive with neighboring states.

He said he supports the educational adequacy study process to make sure teachers are paid more in the long run.

"There was a big push, and I think mostly political this summer, to just throw the [state government's] surplus at teacher salaries," Johnson said. "I think we need to look at ways to compensate the good teachers, and maybe in tiers related to not just setting up a schedule based on longevity, but actually on performance.

He said he wants to make sure violent criminals serve the sentences that they are given, and to support law enforcement, and to adequately compensate county jails for holding state inmates.