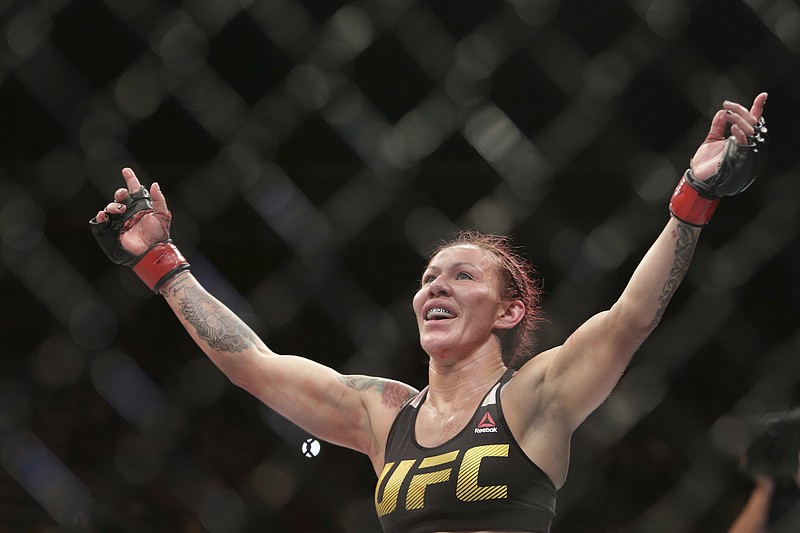 HUNTINGTON BEACH, Calif. -- When Cris "Cyborg" Justino turned 37 this summer, she was in the middle of hundreds of hours of grueling training for her professional boxing debut.

And Justino didn't sweat away the months in this compact gym in a gritty industrial backstreet in Orange County simply for a paycheck.

"I'm not doing it for the money," she said. "It's the opposite, actually."

One of the world's most accomplished mixed martial artists is chasing a dream she has held since she first learned how to fight in Brazil nearly two decades ago. After competing professionally in Muay Thai and in grappling, this former handball player will step into the squared circle for the first time tonight to face Simone Silva in Curitiba, Justino's hometown.

"I have some butterflies in my belly, but I like to feel this," Justino said. "I've had a lot of incredible fights, but it's good for me to still have challenges. I always want to challenge myself. I never want to stop. Why not? Everybody has to do something uncomfortable. You can't just sit on the couch and think about having a dream. You have to go for it."

Justino acknowledges her latest fight is not practical from an economic standpoint.

While women's MMA and women's boxing have both grown steadily over the past decade, fighters from both sports confirm MMA almost always pays women much better. There are plenty of reasons for the disparity, but most fighters agree structured MMA promotions do a superior job of promoting women. Women's MMA is also widely perceived to be more viscerally exciting, since it provides many more avenues to stoppage victories than boxing.

Justino hasn't lost an MMA fight since 2018, and while she wouldn't confirm the exact numbers, she makes much more money as Bellator's current featherweight champion than she'll make in boxing. Even two-time Olympic boxing gold medalist Claressa Shields has started an MMA career in search of the big paydays that haven't reached the top women in boxing.

"It's really not the best thing for me to do for money, but money isn't everything," Justino said. "This is for my love of boxing."

When Justino decided she shouldn't wait any longer for her boxing debut, she was still surprised by the lack of financial rewards in the sport, even for a fighter with Cyborg's name recognition and star power. Justino's first fight will be available in the U.S., where she lives, solely on Internet streamer Fite as a $13.99 pay-per-view event.

"We were talking to American (boxing) promoters, and we were like, 'Really?' " said Ray Elbe, Justino's trainer and fiance. " 'Really, that's it?' That's why we're doing it in Brazil, because it's a little better."

Combat sports are full of athletes moving into different sports in search of bigger paychecks and attention. Mixed martial artists spend thousands of hours working on their striking, yet very few are good enough to compete in a ring with the world's best boxers -- or even YouTube stars with solid boxing skills, as Jake Paul has proven while beating up former MMA stars Ben Askren and Tyron Woodley.

Justino changed her normal training routine extensively for the ring, adding swimming and other cardiovascular work to a new slate of boxing training that includes working with Mia St. John, the former super welterweight world champion.

"Boxing for MMA is different than real boxing," Justino said. "You have to work harder and have a lot of different strategies. You can't just take somebody down if something is going wrong."

If her fight goes well, Justino would love to get a shot at Irish champion Katie Taylor, whose bout with Amanda Serrano in New York last April was perhaps the biggest women's boxing event yet. And no matter where boxing takes her, Justino intends to be back in the Bellator cage soon to defend her belt.

"I'm never done with MMA," she said. "If this opens the door for other (boxing) fights, I would do it, but I will always come back to MMA."