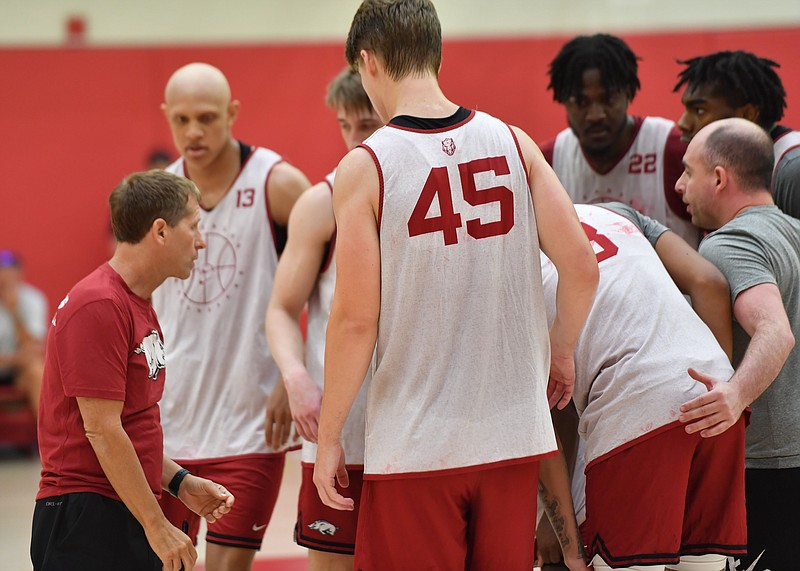 DALLAS — University of Arkansas men's basketball Coach Eric Musselman and his staff has a track record of recruiting elite prospects and they have their sights set on the nation's No. 1 junior prospect, Tre Johnson.

Johnson, 6-5, 180 pounds, of Dallas Lake Highlands, is ESPN's No. 1 shooting guard and No. 1 overall prospect in the nation for the 2024 class and is also the No. 1 overall recruit nationally by the other three recruiting services.

Arkansas freshman guard Nick Smith Jr. finished as the No. 1 overall recruit nationally by one recruiting service and was ranked No. 2 and No. 3 by two other services. Razorbacks freshman guard Anthony Back and forward Jordan Walsh were also 5-star prospects.

"They try to go for a lot of combo guards that can play both ends of the court, and they go for big guards like myself," Johnson said.

Johnson recently made an official visit to Texas and has one planned for Baylor on Oct.1.

"They're trying to get me for a visit," Johnson said of Arkansas. "I already have one set up to Baylor for [Oct. 1], and I really don't have anything set up. I'm going to take most of my visits before the end of October. That's when we start official practices."

Johnson averaged 23.8 points, 5.6 rebounds, and 2.3 assists per game while leading the Wildcats to a 32-5 record as a sophomore. He said there's "a high chance" he visits the Hogs because he wants to see more of what the coaches are saying about the program and utilization of the guards.

"I get a good vibe from all the coaches," Johnson said. "They all tell me things that could help improve my game overall and they tell me things about the school, what they've done with other guards and the experience they have on the coaching staff."

"He's just a tremendous offensive talent and just kind of beyond his years a little bit with his basketball IQ," Duffield said. "He's able to get to spots on the floor. He's a really good jump shooter. Really good shooter and is just special at scoring on three levels. Finishes at the rim, has a great midrange game. His shot mechanics and high release point enable him to get to spots and shoot over really good defense and he's really good at showing from the outside, too."

Johnson said a good relationship with a school's coaching staff, development and a winning culture will help entice him to the program he chooses.

"Somewhere I can go and get better and go and win a national championship," Johnson said.

His father, Richard Johnson, who was a standout guard at Baylor and Midwestern State in the late 1990s, said he is proud of his son's progression into being a top prospect.

"Ever since he was a little kid, everything people are seeing, this is what we dreamed of. This is what we planned for," the elder Johnson said. "As a young kid, he showed the passion, the drive to want to to be great. ... I think if I had the guidance he has, I could have probably been a little bit better. ... It's trusting the process and sticking to it, and that's the product of it right there."

His father also said he is determined to help his son go through the process the right way.

"I visited one school and verbally committed because I was the first one from my family to go to college," said Johnson, an assistant coach at Lake Highlands. "So now that I know more about the process, that's what I'm here for to help him at look at the personnel, look at the coaching, the style of play.

"It's going to be his decision, but I'm just here for the support and help him navigate through everything and look for what we're looking for to make it to that next level."

The elder Johnson said he likes how the Razorbacks' staff has recruited his son and also likes the Hogs' success on the floor.

"They have really been recruiting, sending letters to the house, coming to practice, calling and texting," Johnson said. "They really have been making a good push and just the success they've had making it to the Elite Eight the past two years. That's big, Not many teams can say that.

"Arkansas is definitely one of our options. We just want to keep on building a relationship and this year we want to watch them play a little bit more to watch their style of play and see how we can fit in."